Keith Higginbotham will study in Dallas starting this fall 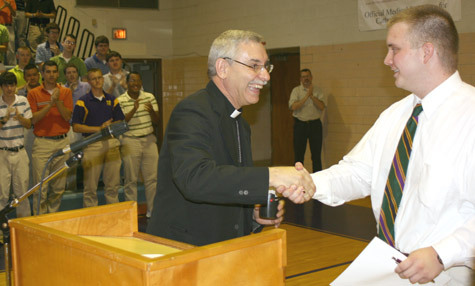 Malea Hargett
Bishop Anthony B. Taylor congratulates Catholic High School senior Keith Higginbotham at the conclusion of the Seminarian Signing Day May 12 in the school gym.

Malea Hargett
Bishop Anthony B. Taylor congratulates Catholic High School senior Keith Higginbotham at the conclusion of the Seminarian Signing Day May 12 in the school gym.

On May 12 the North Little Rock native stood before the student body and received a standing ovation for signing a letter of intent. Not to play college sports, but to study for the priesthood for the Diocese of Little Rock.

Bishop Anthony B. Taylor and Msgr. Scott Friend, diocesan vocations director, hosted the second Seminarian Signing Day at Catholic High to elevate the importance of more men agreeing to discern the call to the priesthood. In 2009 two CHS graduates entered the seminary.

In speaking to the 670 students and teachers in the school gym, Msgr. Friend answered the critics who think the event is too much pressure on one young man.

"We feel like this is a way to celebrate an important moment in Keith's life as well as in the life of the Church," he said. "Keith has been praying to our Lord for a long time, listening to him. He feels the Lord is calling him to the priesthood. It takes courage to say yes to the Lord, especially for something that is not valued in our culture today. ... Today is not an ordination. ... What we do know is that God has been stirring in his heart and he is ready to begin to discern more fully what God is calling him to do in his life."

Bishop Taylor added that Higginbotham has eight or nine years of studying before he becomes a priest and will have many opportunities to discern his calling.

"Every one of you has a vocation," he said. "That is different than a career. A vocation is when you are living for something bigger than yourself. A career is when you choose an occupation that you think will pay well or that you will be pleased with. Vocation is when you ask God what he wants you to do with your life and then responding. It requires listening and it requires prayer. It doesn't happen in a single moment."

During the brief ceremony, the bishop and Higginbotham read from the letter of intent, which was then given the official bishop's stamp. Joining Higginbotham were his parents, Sherry and Ralph Higginbotham, members of St. Anne Church in North Little Rock, and their pastor, Father Tom Stehlik, CM. Eight seminarians and three other priests also attended.

At the conclusion of the ceremony Higginbotham was given a University of Dallas cap by the Serra Club. He will be enrolled at Holy Trinity Seminary on the UD campus in Irving, Texas.

Higginbotham said he has been seriously thinking about the priesthood since he was a sophomore. He is a member of the school's Schola, a Latin chant choir, and the Junior ROTC. At his parish, he serves as a lector, altar server and youth group leader.

He credits Chuck Ashburn, CHS vice principal, and Brother Richard Sanker, CFP, school counselor, with helping him in his discernment.

While growing up at St. Mary Church and School in North Little Rock, he said, "I always had a deep respect for the Church and especially for the clergy."

He said he hopes the signing was an opportunity for another student to start thinking about becoming a priest.

"If it wasn't for that, I wouldn't have wanted to do this at all," he said of the event. "The whole reason I was OK with the signing was to encourage them and show them it is OK."

Higginbotham's parents said they are supportive of their son's decision.

"Even the older kids would come to him in school and tell him their problems and he would just listen," Sherry Higginbotham added.