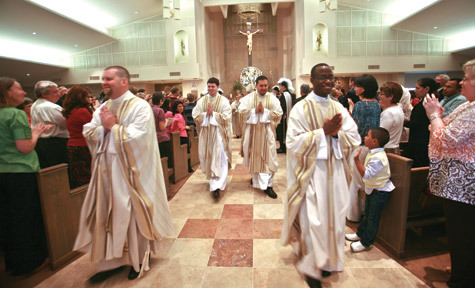 Bob Ocken
Fathers Jason Sharbaugh (front left), Joseph Archibong, Tony Robbins (back left) and Ruben Quinteros are all smiles as they leave Christ the King Church in Little Rock May 22.

Bob Ocken
Fathers Jason Sharbaugh (front left), Joseph Archibong, Tony Robbins (back left) and Ruben Quinteros are all smiles as they leave Christ the King Church in Little Rock May 22.

The priestly ordination May 22 at Christ the King Church in Little Rock was an event full of firsts for the Diocese of Little Rock.

Fathers Archibong and Quinteros were joined by Father Tony Robbins of Little Rock and Father Jason Sharbaugh of Morrilton for the emotional two-hour Mass celebrated by Bishop Anthony B. Taylor and concelebrated by more than 55 priests.

The Mass highlighted the cultural and familial ties of the men. The first reading and several songs were proclaimed in Spanish. The second reading was said in Efik, one of the dialects spoken in Nigeria. Members of the Robbins and Sharbaugh families presented the gifts.

At the beginning of the Mass, Bishop Taylor called the priests "the four evangelists" and told the people that filled that 1,300-seat church that it was the "most joyous" event he has experienced since he became bishop two years ago.

The ordination rite includes several steps. The men were first called forth by Msgr. Scott Friend, diocesan vocations director, to attest to their worthiness. They then make a promise of obedience and respect to the bishop and his successors. During the Litany of Supplication the men prostrate themselves on the floor. The two essential acts of the ordination come when the bishop lays hands on each one of them, followed by the other priests present, and then prays the prayer of ordination over them.

Once the men were officially priests, a priest assisted each one of them with putting on their stole and chasuble.

During the anointing of the hands, the bishop rubbed sacred chrism oil in their hands to signify their special role in administering the sacraments, especially the Eucharist. The bishop then placed a paten holding the bread and a chalice of wine in their hands. The rite ends with the bishop and priests each sharing a fraternal embrace with the newly ordained.

In his homily, the bishop challenged the men to "revere Christ who comes to you in the people you serve."

"They are our 'co-workers in the vineyard,'" he said of the laity. "So as you begin your priestly ministry, I urge you to revere the people you serve. Indeed, you will serve them best by empowering them to contribute their gifts, placing yourself at their service -- not the other way around. The Church in Arkansas needs priests who lead by example, who revere the spiritual and ministerial gifts of those Jesus sends us to serve.

"Our Church should be characterized by collegiality, not coercion; by intelligent discourse, not edicts imposed from on high; of ideas and values, not just legal rules."

At the end of Mass, the new priests blessed their families and the bishop. They then blessed the congregation in unison.

Shortly after the ordination, the new priests said many of these moments were emotional for them.

Father Robbins said putting on the chasuble of a priest touched him.

"I just felt the joy of the Holy Spirit come over me," he said. "He has clothed me in a new dignity, the priesthood of Jesus Christ."

He said seeing all of the priests behind the altar reminded him that he is now part of that brotherhood.

"I became overjoyed," he said. "I have all these new brothers ... When I stood behind the altar and looked at all the people, I got emotional because I just saw how God has answered all of our prayers."

His mother, Kay Robbins, said, "It's an answered prayer that God has directed Tony to the priesthood. It's a great blessing."

"He's a very gentle man," she said of her son. "I think he's a very prayerful man and he listens to God ... I think he will be able to help and guide people."

Father Archibong said he was moved during the entire Mass.

"It is almost like dreaming, but it's real," he said.

It was especially important for him that his brother, Father Columbus Archibong of Nigeria, was there to to help him with his vestments and later to share the sign of peace. Several Nigerians in the congregation shouted a cheer during Mass in honor of Father Archibong.

"It is kind of like them saying, 'Go Hogs Go," Father Archibong said.

During the reception, five priests from Nigeria who are serving in the diocese sang him a song of welcome that is normally sung at ordinations.

His cousin, Otobong Udoudoh, and several members of his extended family live in Atlanta and attended the ordination.

"I was just in awe because I have never been at an ordination before," he said. "It was very respectful and they tied it back to the whole idea of Christ as the head of the Church."

Father Sharbaugh said prostrating himself was an important moment.

"All of it was awesome," he said. "When I was on the floor, I thought 'I am really doing this.' I was just shaking."

When his spiritual director from the seminary laid hands of him, he couldn't hold back the tears anymore.

"I am honored and humbled," said Beth Sharbaugh, Father Sharbaugh's mother. "It's been years in the making. It hasn't always been a smooth ride for him or myself. With the constancy of prayer, it has come to fruition."

"I think he will be an exceptional priest, particularly with troubled youth, with people who have felt disconnected with the Church, who are disenchanted," she said. "He has a command of Scriptures that will appeal to non-Catholics."

"I am really happy," he said. "When I prostrated myself on the floor, it was a powerful moment. A lot of feelings. I was really thankful."

Yolanda Mandujano traveled to Arkansas with 12 others from Celaya, Mexico, where they first met Father Quinteros when he was studying for the priesthood there.

Father Quinteros said he is looking forward to a time when he can travel to his home country.

"I want to give my blessing to my family, especially my grandmother, in Argentina," he said. "She really had an important role in my vocation. I want to share my priesthood with her too."

The priests will begin their first assignments as associate pastors June 9.