At ordination, Father Stengel called to be courageous, loving

Ratcliff native will continue studies on Scripture in Rome 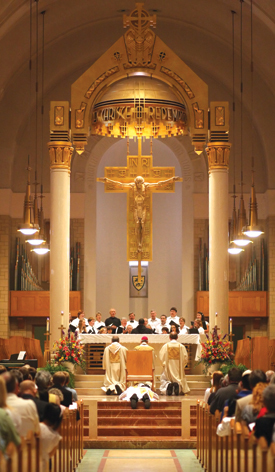 Karen Schwartz
Father Josh Stengel prostrates himself on the church floor at Subiaco Abbey July 17 during his ordination while the choir sings the litany of supplication and Bishop Anthony B. Taylor, deacons and the congregation pray.

Karen Schwartz
Father Josh Stengel prostrates himself on the church floor at Subiaco Abbey July 17 during his ordination while the choir sings the litany of supplication and Bishop Anthony B. Taylor, deacons and the congregation pray.

For the first time in 23 years, the Diocese of Little Rock ordained five priests in one year.

On July 17, Josh Stengel of Ratcliff was ordained by Bishop Anthony B. Taylor before about 550 people at the church at Subiaco Abbey. On May 22 four priests were ordained in Little Rock in a single ceremony. Father Stengel's ordination was delayed because he attends the Pontifical North American College in Rome and its school year doesn't end until early July.

Bishop Taylor said Father Stengel's first name signifies he was called by God since his birth 31 years old. Jesus is the Greek translation of Joshua, which means "God saves."

"From the day of your birth God already had a role picked out for you in his continuing work of salvation today," the bishop said in his homily.

Father Stengel has been "another Jesus," but following his ordination to the priesthood he is now "another Christ."

"I will ordain you by laying my hands on your head and then I will anoint your hands to show by that visible sign that you have become -- literally -- another Christ, another 'anointed one,'" Bishop Taylor said.

Bishop Taylor encouraged Father Stengel to take a verse from the first reading to be his mission statement as he begins his ministry: "The spirit of the Lord God is upon me, because the Lord has anointed me; he has sent me to bring glad tidings to the lowly, to heal the brokenhearted, to proclaim liberty to the captives and release to the prisoners, to announce a year of favor from the Lord and a day of vindication by our God, to comfort all who mourn." (Isaiah 61: 1-2)

If Father Stengel follows this statement "with courage and humility and love, people will encounter Christ in you quite readily," the bishop said.

The ordination rite included the election of the candidate, the promise of the elect, the litany of supplication, laying on of hands by the bishop and fellow priests and prayer of ordination. After he was invested with the vestments of a priest, a stole and chasuble, the bishop anointed his hands with chrism oil and placed a paten with bread and a chalice of wine in his hands. The rite concluded with the bishop and other priests sharing the sign of peace with Father Stengel.

One of the most important parts of the Mass for Father Stengel was when he prostrated himself on the floor while the choir sang the litany of saints.

"I was tearing up and I was sweating," Father Stengel said. "I felt the prayers and love of so many people. It was such a powerful moment, just feeling the love of God and his blessing."

During the homily, Bishop Taylor encouraged Father Stengel to "think of it as you laying down your life for others, giving yourself wholly and completely to God."

"And then when you rise to come forward for the laying on of hands, know that from that moment forward your life will be changed irrevocably," he said. "You will become another Christ -- anointed by the Holy Spirit and chosen by the Father to be, for others -- for the rest of your life -- a place of sacramental encounter with Jesus himself."

The Mass was attended by many people who are important in Father Stengel's life. In addition to his parents, Kenny and Pat Stengel, he was joined by his three brothers, Carl, Matthew and Adam Stengel, his sisters-in-law, seven nieces and nephews and about 15 other extended family members.

"It's a great day for the Church," Kenny Stengel said. "He is a very humble man. He will be a great servant."

Father Stengel started pretending he was a priest when he was 7 or 8 years old, his mother, Pat, said.

"He would play at it for a while," she said. "Then he was quiet about it through those young teenage years. I felt (the calling) was still there, the possibility was still there, but he took his time."

His family has had a significant impact on the Church in Arkansas. The family and extended family have been active at St. Anthony Church in Ratcliff, a community of 50 families in Logan County.

His second cousin is Father Erik Pohlmeier, originally from Paris, who now lives in Little Rock. Father Pohlmeier's father, Tom, is a deacon in Paris.

Father Stengel's father will continue the tradition because he is studying to be a deacon and is expected to be ordained in 2012.

Also attending the Mass were four men who served with Father Stengel in the Army Reserves in 2003 while they were in Iraq.

Father Stengel will fill in this summer at Our Lady of Good Counsel Church in Little Rock. He will return in October to complete his final year of studies in Rome to get his licentiate in biblical theology.

He said he looks forward to ministering in parishes.