Torres turns away from gang, drugs to dedicate life to Christ

'El Serio' has given up baggy clothes, rap career to work for diocese 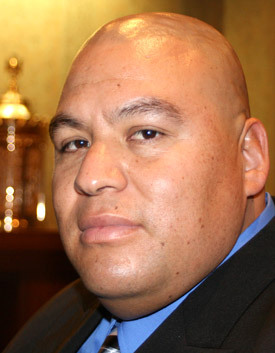 Jaime Torres used to be serious about his gang and doing drugs. Now he is serious about serving the Catholic Church full-time. The Hispanic leader has joined the diocesan staff as associate director of the Hispanic Ministry Office.

Torres, formerly a member of St. Vincent de Paul Church in Rogers, is well-known in the Hispanic community as a Christian rapper, going by the name of "El Serio" (The Serious One), and founding Fuerza Transformadora (Transforming Force), a Catholic movement focused on helping young adults come back to the Church and turn away from bad influences, such as drugs and alcohol.

Torres will work with the office director, Deacon Marcelino Luna, to coordinate and direct various Hispanic programs for adults and diaconate formation. Jose Dionicio "Nicho" Vazquez, the former associate director, has joined the diocese's Youth Ministry Office and will direct all Spanish-language programs for teens and young adults.

He joined a gang when he was 15 years old and knew several people who were murdered.

"I used to be a gang member. I was a leader and founder of that gang," he said. "I used to do drugs and sell drugs. I got into so many problems. I didn't like to go to school. I just wanted to party. A lot of my friends died. I am lucky that I am still here. There were times when they were shooting at me."

Torres, however, never carried a gun.

"I just made the decisions. I just told them who to shoot," he said.

To escape the gangs, he moved to Rogers in 1995 with his parents when he was 23 years old. Torres admits he didn't reform his behavior.

"I brought my friends from California here and we started selling drugs," he said.

In 2000 he was arrested for assaulting a police officer during a party in Springdale and could have faced six years in prison. The charges were later dropped. Torres had another run-in with a police officer in Rogers one week later. During a traffic stop, Torres was charged with drunk driving and not having a driver's license.

After being released from jail, Torres finally admitted to himself that he could no longer continue his criminal lifestyle. He said he didn't know how to pray, but he made a promise to the Lord.

"That was the first time I talked to Jesus," he said. "I didn't know anything about Jesus ... I told him, 'If you help me get off of drugs, I will leave my gang and I will start going to church every Sunday.'"

He began to cry.

"I didn't want to cry," he said. "I felt someone come into my room and sit beside me. I asked him, 'If you are Jesus, can you help me?' Since that day I haven't used any drugs, any alcohol."

He visited St. Vincent de Paul Church in Rogers and asked Father Miles Heinen, CM, for advice. The Vincentian priest encouraged Torres to attend Mass weekly and get involved in the Hispanic young adult group. He gave up his baggy shirts and pants, his outward sign that he was affiliated with a gang.

In 2003 Torres brought Prevencíon y Rescate (Prevention and Rescue) to Arkansas to help other gang members and those addicted to drugs and alcohol to reform their lives and turn to Christ.

That same year, he also began rapping and released his first album, "Jesus in the Barrio." He eventually released two more albums with songs he wrote and produced. His music career took him to at least 18 states and Mexico.

In 2006 Torres broke away from Prevencíon y Rescate and formed his own ministry, Fuerza Transformadora. Torres started to get more requests to speak around the country about his conversion and perform concerts.

Torres has focused his ministry in Arkansas and there are now Fuerza Transformadora groups in Rogers, Springdale, Fort Smith, Texarkana, De Queen and Hope.

Membership in Fuerza Transformadora is open to anyone.

For the past 10 years Torres has dedicated his life to helping young adults change their lives. While he has never charged for his concerts or presentations, he has made a living by selling his CDs and original screen-printed T-shirts and accepting donations.

With his new job at St. John Center in Little Rock, Torres said he has given up his rap concerts, but he expects he will continue to promote Fuerza Transformadora, now as an official diocesan program, and give retreats and conferences. Torres said his calling is to serve the Diocese of Little Rock.

"Maybe some day I will give a concert, but I can preach right here," he said.

He and his wife, Griselda, attend Christ the King Church in Little Rock.