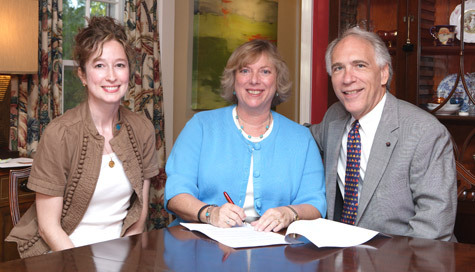 St. Joseph Home in North Little Rock has been leased to a group of Catholics who hope to turn the 100-year-old building into a place where its Catholic mission can continue.

St. Joseph Center of Arkansas Inc., a new non-profit corporation, signed a 50-year lease earlier this month with the Diocese of Little Rock to take over use of the building formerly known as St. Joseph Orphanage.

Bishop Anthony B. Taylor agreed to lease the building to the group after nearly two years of negotiations.

St. Joseph Center of Arkansas leaders say they intend to study possible uses for the building. The ultimate goals of SJCA is to preserve a "historic monument that was witness to a century of Catholic caring and outreach to the community -- and to now find appropriate uses for it today."

St. Joseph Orphanage was built by the diocese in 1910 and operated by the Benedictine sisters of St. Scholastica Monastery in Fort Smith. From 1978 to 1997, after the orphanage closed, the sisters used part of the building as a daycare center. When the daycare closed, the diocese operated St. Joseph Home as a retreat center for Catholic groups.

"We are very excited that Bishop Taylor and the various diocesan committees are giving our group this opportunity," board chairwoman Sandy DeCoursey said. "The path to this point was a long one, but we believe there is so much potential for that building and its surrounding land. It is truly a holy place and a treasure of the diocese."

An ad hoc committee formed in February 2008 after a front-page story in the Jan. 12, 2008, issue of Arkansas Catholic reported plans to sell the building and property. At that time, Msgr. J. Gaston Hebert, diocesan administrator, intended to put the building on the market for sale on March 1, 2008, unless a Catholic organization stepped forward with a viable plan. Although desiring to keep the property in the diocese, the article noted that no organization had any such plans to acquire the building, which is in need of extensive renovation.

At the time, Msgr. Hebert said the diocese was incurring considerable expense maintaining the building and land. About $110,000 is spent each year on the building to pay for insurance, utilities, maintenance and repairs.

On April 23, 2008, Msgr. Hebert issued a news release stating that the diocese had "decided not to list (St. Joseph's) for sale at this time. A group of Catholics has come forward with an interest in using the property. An arrangement between the diocese and this group is in the process of being worked out. Additional information will be made public at a later time."

For the past two years, the ad hoc committee established a nonprofit, now known as St. Joseph Center of Arkansas, and worked with Msgr. Hebert, Bishop Taylor and the diocesan representatives to put a workable leasing agreement in place that will give the group the opportunity to evaluate the possibilities and continue the Church's mission.

"SJCA's motto is 'We will not quit before the miracle,' so the group is excited to have persevered in reaching its first milestone in the on-going process of revitalizing St. Joseph's," the group's press release stated.

Other board members are vice chairman Carl Keller Jr., secretary Kristy Eanes, treasurer French Hill, Deena Burnett-Bailey, Ken Crow and Janet Keller, all of Little Rock. SJCA will begin work immediately by hiring a firm to conduct a formal planned-use study. The study findings and proposed uses, including architectural plans, will then be presented to Bishop Taylor by September 2011, according to the press release.

"St. Joseph's is a gem for the diocese," Hill said. "Working with the group to save this property has been a worthwhile task -- an investment in our Arkansas Catholic heritage. Bishop (John B.) Morris had the foresight to purchase the initial acreage and to construct the building, and the SJCA's goal is to find the solutions necessary to restore it for future faith-filled Arkansans."

St. Joseph's long history began in 1907 when Bishop Morris bought 720 acres at 6800 Camp Robinson Road to build a place for children and elderly who had no one to care for them.

Bishop Morris wanted the sisters of St. Scholastica Monastery to oversee St. Joseph. A total of 116 Benedictine nuns lived and served at St. Joseph for a century. The last Benedictines in residence retired to St. Scholastica in December 2007. The building continued to be used by diocesan, parish and religious groups for their ministries until last month.

St. Joseph, which is listed on the National Register of Historic Places, includes a 63-acre tract of land that was used for extensive vegetable gardening, fruit orchard, rose garden and raising some hogs and Holstein cattle. Julius Greb, St. Joseph's grounds and maintenance supervisor for the past 50 years, will continue in his current position under the terms of the SJCA contract.