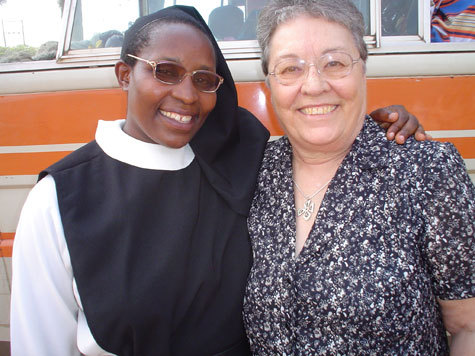 She had first visited these communities teaching a course on Psalms in 2003 and stayed in touch with all three. She traveled back in August with Jean Daly of Leamington Spa, United Kingdom, who had spent three months volunteering at St. Scholastica Monastery in 2009.

“Christianity has grown very quickly in Africa,” Sister Hilary said. “The monasteries don’t know what to do with all their vocations, but they have to be careful that young women are coming for the right reasons. There are lots of candidates and novices, but some come and don’t stay.”

At their first stop, Our Lady of Praise Monastery in Butende, Uganda, Sister Hilary and Daly attended a perpetual profession ceremony.

Our Lady of Praise Monastery was founded by 13 Dutch sisters in 1964. The cloistered sisters earn their living through the land, operating a piggery with 15 boars and sows and a banana plantation.

“The Cistercian sisters have a certain amount of leeway because of the hardships they’ve endured in Uganda,” Sister Hilary said. “They keep the rule of silence, but not totally. Sometimes the novices would come over to the retreat center to talk to us and ask questions.”

While visiting the Cistercians, Sister Hilary and Daly visited St. Mary Orphanage in Mbale, a diocesan facility that cares for about 35 children.

Their second stop was to the Contemplative Benedictines at St. Benedict Priory in Tororo, Uganda. The monastery was founded by 13 sisters from Breda, Netherlands, in 1960 at the request of the Ugandan bishop. During 1969-1972, when civil war rocked the country and Idi Amin overthrew the government, the missionaries were persecuted and recalled to Europe. Without support, African novices abandoned the monastery. After the war, they began a long but ultimately successful process rebuilding their community, which celebrated its 50th jubilee earlier in the year.

“Both these communities get up at 4 a.m. and pray throughout the day. In between prayer, they do manual labor, work in the retreat center, keep the gardens and farms going and raise cattle,” Sister Hilary said.

At Tororo, they visited an eye clinic operated by the Benedictine priests of Christ the King Monastery. Volunteer medical teams come from all over the world to spend several weeks helping at the clinic. Their third stop was to Sacred Heart Convent in Nairobi, Kenya, to the Missionary Benedictine Sisters of Tutzing. The Missionary Benedictines are more involved with active ministry than the Cistercian and Contemplative Benedictines. Their convent, established in 1984, operates two dispensaries and a guest and retreat house. Their sisters are active in parishes, schools, kindergartens and clinics. They also care for the elderly in their priory house.

Although she taught a 10-day Benedictine values class at each of her three stops, Sister Hilary’s visit to East Africa was a powerful learning experience as well.

“It’s a completely different culture and I realize how blessed we are to live in America where we have plenty of food,” she said. “We have everything we need, plus a lot we don’t need. It’s difficult to see the poverty and the sickness in Africa, and yet the people are very happy.”