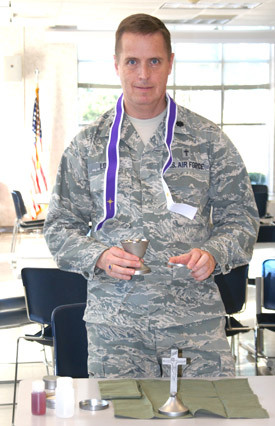 Phyllis Hemann
As an Air Force chaplain, Father Frank Lowe has everything he needs to celebrate Mass any time or place, all packed into his chaplain's ki

Phyllis Hemann
As an Air Force chaplain, Father Frank Lowe has everything he needs to celebrate Mass any time or place, all packed into his chaplain's ki

Father Frank Lowe seemed destined to be a priest and Air Force chaplain -- after 25 years as a priest, he certainly is following God's lead.

"I was always interested in the priesthood as a child. I was an altar server and attended Catholic grade school," he said. "The influence was always there."

After high school he worked for three years before going on a vocation retreat in San Diego, Calif.

"This college seminary's focus was on discernment. You go and find out if God is calling you to be a priest," he said.

His family thought it wouldn't last. Of course, he said, they didn't tell him that then.

"They thought I was going through another stage. My parents were excited, but not too hopeful," he said.

Previously, his oldest sister entered a convent but decided it was not for her. Another brother left the high school seminary after a year.

When he asked his sister's advice about a vocation, her reaction surprised him.

"I thought she would talk me out of it, but she didn't," he said. "She encouraged me to go. Even if it lasts six months, she told me, it is time well-spent because I would grow spiritually."

By the end of college, Father Lowe said he knew God was calling him.

"When I was ordained, my family was very happy," he said.

He was ordained a priest in the Diocese of San Bernardino, California, on Dec. 12, 1985. After ordination, Father Lowe worked in his diocese for eight years.

As a seminarian, he had worked in the Air Force chaplaincy program. Something about it clicked with him.

"My feet have always been in two places -- civilian and military. I learned over the years, not to make too many plans and let God take the lead," he said. "This is a calling for me. It is an idea that never went away."

For a time, he thought being a chaplain wasn't meant to be. He asked three times and was rejected by his bishop. On the fourth try, he decided to stop if the answer was no.

"I thought God was leading me away, but it was an opportunity to test my faith," he said.

There was a sign, Father Lowe said. His bishop said "yes."

"My father told me to be very patient with my brother priests who didn't understand military chaplaincy," he said. "If they've never been in the military, they have no idea how powerful the ministry is."

A pivotal point in his father's life came as a prisoner of war during World War II. An Air Force chaplain and priest from Lafayette, La., Father Verbis LaFleur, influenced him to later become Catholic. At the time his father was agnostic.

His father's experiences highlighted the impact that chaplains can have on troops.

"He told me to never underestimate the impact I was having on people, especially when deployed," Father Lowe said. "My father bunked 40 feet away from Father LeFleur, but he watched him and saw that he was real. He influenced my father by his example."

When Father Lowe is serving in the military, his diocese releases him to the Archdiocese for the Military Services.

In the military, he has worked as chaplain in North Dakota, Mississippi and Alabama. He also served overseas at Lakenheath, United Kingdom, and Okinawa, Japan. He was also deployed four times to Morocco, Saudi Arabia, Kuwait and Iraq.

"God is still in charge," he said. "In my life, there's been so many twists and turns -- so many places that I never expected to go."

Six months ago, he transferred to the Little Rock Air Force Base in Jacksonville where he is pastor of Holy Family Parish and wing chaplain, which means he is the head chaplain.

Wherever he goes, whether it is on base or deployed, there is a Catholic parish with all the normal parish things. Even in countries where it is not normally allowed, like Saudi Arabia, where Father Lowe said Mass in the American and French embassies.

"It is quite an experience celebrating Mass in a country where Christianity is outlawed," he said.

He's also been in places where there hasn't been a priest in awhile.

"A lot of places that I go, they don't have a Catholic chaplain," he said. "It means a lot to them to have a chaplain, and when you see the really rustic conditions that they're living in for months, you realize the incredible sacrifice they are making for us."