Priest was born, raised and retired in Hot Springs 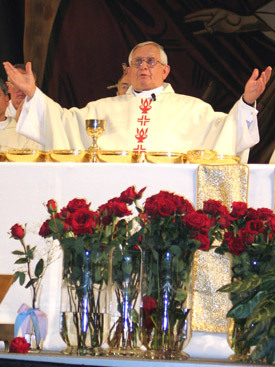 For the past nine years Msgr. J. Gaston Hebert has been retired, but one wouldn't know it from looking at his recent accomplishments.

When he left Christ the King Church in Little Rock in 2001, he continued to serve the state like few priests have done.

He celebrated his 50th anniversary as a priest on May 26. As he approaches his 76th birthday Dec. 31, he said in an Arkansas Catholic interview that he is ready to start thinking about what a true retirement from active ministry will look like. He plans to sell the home he built in his hometown of Hot Springs and move to Albuquerque, N.M., to be closer to his niece and her family.

"I have no timeline, (just) when and if my house sells," he said. "I am very close to that family. I will enjoy not only someone who can be of great help to me as my health advances, but also someone and whose family I can fully participate. We have a deep bond and always have. While I will regret leaving the diocese where I have served for 50 years and lived in all my life, I think it is probably the smart thing for me to do at this time."

"I never thought I would be anything but a dyed-in-the-wool Arkansan," he said. "I will always be a priest of the Diocese of Little Rock."

Leaving Hot Springs and Arkansas will be challenging. Msgr. Hebert was born in 1934 to Dr. Gaston A. and Velda Hebert in Hot Springs. Except for two years he lived in California while his father served in the Navy, Msgr. Hebert has lived in the Natural State. He was baptized and received his first Communion at St. Mary Church where he served as an altar server and where he celebrated his first Mass in 1960.

He planned to become the fourth generation of the Hebert family to become doctors. He went off to St. Louis University to study pre-medicine, but he was so inspired by his Catholic roommate's devotion to the faith that Msgr. Hebert's faith was strengthened. He heard the call to become a priest and returned to the state to study at St. John Home Seminary in Little Rock.

Msgr. Hebert had one older sister, Connie Newman, who had two sons and one daughter. Msgr. Hebert grew closer to these relatives after his mother, sister and brother-in-law died in 1995.

While he will live closer to his niece, Gay McCollum, her husband Tom, two children and one grandchild, he will miss seeing his nephew, Bart Newman of Hot Springs.

"We share a lot in our relationship with God. He will be the thing I will miss most about leaving Arkansas," he said.

Moving to New Mexico might leave him more time to write, one of the hobbies he said he wanted to devote more time. He would like to write a book of meditations on the Psalms and a book on the characters within the priesthood.

"I would hope that Albuquerque would give me the opportunity to do that. I play a little more duplicate bridge than I need to," he said.

Reflecting on his 50 years as a priest, he repeatedly used the word "blessing."

"I feel my whole life has been one of enormous blessings, undeserved," he said. "I have been a recipient of God's graces throughout all of it...The priesthood is my life and it always will be. To the four bishops I have served under, they have all been super to me, trusted me and have been able to work with me with a real pastoral sense."

"I have been deeply blessed. I have nothing in the world to complain about. Everything in my life has been pretty easy."

"If there is anything from Scripture that would stand out in my mind it would be the line from the Magnificat, 'The Lord has done great things for me and holy is his name,'" he said.

Msgr. Hebert had four major positions in the diocese during his 41 years of active ministry. He was first an English and drama teacher at Catholic High School from 1960 to 1975. He then became a pastor of St. Paul Church in Pocahontas from 1975 to 1981. He was the pastor of Christ the King from 1981 to 2001.

His fourth role that was largely unknown to the laity was as vicar general from 1988 to 2006. In this role, he served as second in charge of the diocese and assisted the bishop.

But the diocesan employees and many lay people around the state got to know him better from 2006 to 2008 when the diocese was without a bishop.

"It was an enormous honor," he said of being the administrator. "It was such a challenge … This allowed Jesus to bring out in me what was necessary at the time. I was very blessed what he was able to give me in those two years."