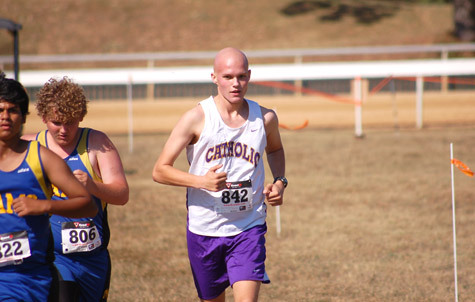 Mike Gibby
Griffin Marczuk comes in 278th out of 278 runners at at the Lake Hamilton cross country meet, held Oct. 9 at Oaklawn racetrack in Hot Springs.

Mike Gibby
Griffin Marczuk comes in 278th out of 278 runners at at the Lake Hamilton cross country meet, held Oct. 9 at Oaklawn racetrack in Hot Springs.

By just about anyone's standards, 31 minutes and 41 seconds in a 5K for a varsity high school cross country meet stinks.

It's the kind of performance middle-aged weekend warriors turn in during runs that raise money for animal shelters and children's museums. It's not what upperclassmen with two years experience, miles of training and the elixir of youth propelling them forward clock.

It's certainly not the time junior Griffin Marczuk envisioned when he took the line at the Lake Hamilton meet with his fellow Catholic High Rockets on the infield of the Oaklawn racetrack Oct. 9. But then, for the first time in his competitive life, Marczuk had absolutely no idea how long it would take him to cover the 3.1 miles ahead of him.

And, truth be told, he really didn't care.

"I wasn't nervous at all," he said. "I knew I wasn't going to win, so there wasn't any pressure like there normally is. I just wanted to get through it."

Marczuk shrugs his shoulders, the left one inching up toward the scar that traces a line where the side of his neck meets his torso -- the former nesting spot for the lump he told his mother about this summer.

"I knew I was going to suck, but I knew I could do it," he said, snapping the listener's attention back to the subject of the Lake Hamilton race. Then, a grin.

Parents of teenagers know the attitude of invulnerability they all seem to carry around, but few of them have to watch that attitude gouged out of their child's psyche like a tree trunk being twisted and pried out of the ground. Marczuk remembers going into shock when the diagnosis -- Hodgkin's Lymphoma -- was delivered.

"I knew there was a possibility, but it was still pretty crazy," he said. "When you're a teenager you don't think about death that much."

By the first week of school in August, Marczuk was in chemo treatments, a regimen that in the cruelest of contradictions intentionally introduces controlled amounts of substances into the body that you ordinarily wouldn't want to get anywhere near. Substances that make your hair fall out and your mouth break into sores and thins your red blood cell population and also kills off the ravenous cancer cells.

Lying there exhausted and nauseated, each dosing hammering him harder than the last, the kid who would become a singular target of prayers throughout Christ the King Parish in Little Rock and known as Superman by his Rocket teammates could focus on little more than hanging on until still other drugs knocked him out.

Marczuk's chemo was administered in a four-week pattern, so there were periods where he could attend school, hang out with his friends and generally do what most 16-year-olds do. His condition didn't allow him to practice with the cross country team, but he kept up on his teammates as the season began. He also began to find out just how many teammates he had.

"I started getting all of this support from people," he said. "I have learned the power of prayer and the power of miracles. So many people were praying for me. I'm really blessed."

Treatment by treatment, Marczuk responded to the chemo and as the tide began to turn against the disease, he started to think about running. His mother, M.J. Orellano, herself a cancer survivor, remembers the day he put those thoughts into action, punctuating his jog through the neighborhood with the Facebook post "Just ran five miles with Jesus."

"I asked him why he wrote that," she said. "Griffin told me, 'Because I knew I couldn't do it without him.'"

Marczuk, a member of Christ the King Church in Little Rock, took that same philosophy to the starting line at Oaklawn. His reason was simple -- "I'm part of the team," he said -- but the challenge was not. Race day dawned unseasonably warm and the ground under the other racers' feet churned into dust, adding further stress to his system. For some of the race, Marczuk wasn't in last place, but eventually it was just him and the memory of what he had been through.

The thoroughbreds in the field fairly sprinted the distance and at one point, the lead group caught and passed the lanky, resolute Rocket. Marczuk moved over, yelling encouragement to the Catholic High runners in the pack, urging them on.

Running alone, he turned a corner to find his teammates, the Mount St. Mary team and more than a few runners from other schools lining the way to the finish. Parents and coaches looked on through tears and shouted until their voices caught so firmly no sound would come out. Catholic High principal Steve Straessle would call it a "top five favorite moment" of his 20 years as a student, teacher and principal at the school. The next Monday, posters of Marczuk adorned Catholic High's hallways captioned, simply, "Courage."

"Griffin Marczuk, bald head covered in sweat and face still smiling, crossed the finish line as number 278 out of 278 runners," Straessle would say during morning announcements the next Monday. "He also crossed that finish line as the toughest kid who ever ran for Catholic High."

Now with the best time in Rocket cross country history under his belt and his cancer in remission, Marczuk can focus on more pressing matters like college visits, prom dances with his girlfriend and the promise of his senior year.

"Enjoy life," he says to anyone who needs to hear it. "There's so much to be thankful for and anything is possible with God's help. You can do it."