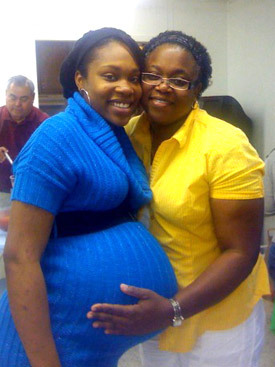 Daniella and her mother celebrate Nov. 13 in Lake Village at a baby shower for her twins, given by volunteers.

Daniella and her mother celebrate Nov. 13 in Lake Village at a baby shower for her twins, given by volunteers.

Without God’s inspiration through Maria Maldonado of Little Rock, twin boys would not be alive on their anticipated birthday, Dec. 25.

Young, pregnant and without hope, Daniella, a 19-year-old living in Brinkley, went to the abortion clinic in west Little Rock on a Saturday this summer.

“What I said to her, I don’t remember exactly, because the Holy Spirit gives me the right words. I did tell her to please ask to see the ultrasound,” said Maldonado, who is a regular sidewalk helper outside the clinic.

Daniella entered the clinic, while Maldonado and the other volunteers prayed on the sidewalk for her.

After looking at the ultrasound, Daniella learned she was carrying twin boys. When she asked about her due date, the answer was Dec. 25.

After that she told them she was “out of here.”

“At first, I didn’t listen. I felt that I would let all my family down by having an abortion, but this was it,” Daniella said in a telephone interview with Arkansas Catholic. “I received three signs that day. The first was Miss Maria; the second was that I was having twins; and the third was that I was due on Christmas. It was meant for me not to do it.”

Her story didn’t stop there.

Maldonado and other volunteer “prayer warriors” organized a baby shower for the young mother and her unborn twins Nov. 13 and drove 130 miles to Lake Village, the mother’s hometown, for the party.

“I don’t need for anything for my babies now,” Daniella said. “It is a huge blessing.”

At the shower, the generosity was overwhelming to the mother-to-be, her family and friends.

Daniella said her family wants to help like Maldonado does. Daniella herself recently encouraged a friend to reach out for help instead of having an abortion.

“There are other options out there and there is help. If you ever need other people to talk to other than family and close friends, help is one call away,” she said.

Since that day, Daniella moved back to Lake Village to live with family. The babies’ father is currently in Marine boot camp. She plans to become a registered nurse.

Maldonado truly is one call away.

“I do follow my girls,” she said. “I see how they’re doing for years. They accept me as part of their family, as I do them. God uses them to be witnesses to others, just as God puts me in the right place with the right words to witness to them.”

Frequently, women who come to the abortion clinic have little or no support. It’s something the prayer warriors and other volunteers at St. Joseph’s Helpers, a Catholic pregnancy resource center across the street from the abortion clinic, can offer them.

“We all need a support system. The value of one baby is priceless...” she said. “They feel that we care about them, and caring about them is a choice. It’s a choice that makes a difference in their lives.”

The support is life-changing, Daniella said.

“I didn’t know there were so many people out there who want to help. No matter what race, creed or anything you are,” Daniella said. “It is amazing to me. They don’t know your face and they want to help you.”

Volunteers are outside the clinic to put something in the women’s hands and hearts, so they can know their options.

“A lot of these women are uneducated about the stages of development -- of the actual fact of what is in me is a living baby whose heart beats. We’re there to give them options -- which one can I live with for the rest of my life. Abortion is non-reversible.”

If a young woman leaves the clinic without having an abortion, she must pay at least $200 for the ultrasound.

For Daniella, it was worth the price.

Taylor and Tyler will soon make their debut this Christmas because Maldonado was there to tell their mother that there were other options.

“All glory and praise goes right back to God,” Maldonado said. “It is awesome -- awesome how God works in our lives if we only let him.”

What Daniella saw on the ultrasound screen was the truly priceless sign -- two heartbeats that this young mother-to-be could not extinguish.

“I cry sometimes because I feel like I had no other options that day,” Daniella said. “Now, I can’t believe that I even thought about it. Now, I can’t wait to have my kids.”