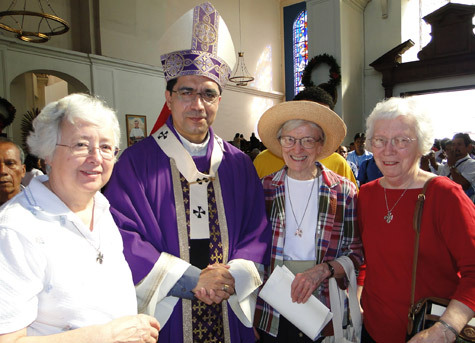 FORT SMITH -- When Sisters Maria DeAngeli, Barbara Bock and Rosalie Ruesewald and oblate Kathy Jarvis of St. Scholastica Monastery joined a delegation Nov. 29-Dec. 6 to San Salvador to commemorate the 30th anniversary of the deaths of four women missionaries in El Salvador, they knew that the best way to honor their lives was to honor the cause they were martyred for.

"Three months before Sister Ita (Ford, MM) was murdered, she wrote a birthday letter to her niece," Jarvis said. "She told her, ‘I hope you come to find that which gives life a deep meaning for you ... something worth living for, maybe even worth dying for ... something that energizes you, enthuses you, enables you to keep moving ahead.' Sister Ita and the other martyrs -- Sisters Maura (Clarke, MM), Dorothy (Kazel, OSU), Jean (Donovan, a lay missionary) -- found their purpose in what Archbishop Oscar Romero called the ‘theology of accompaniment.'"

The American sisters and lay woman were beaten, raped and murdered by members of El Salvador's national guard on Dec. 2 1980. The 12-year civil war continued until 1992 and claimed the lives of 30,000 Salvadorans as well as the lives of Archbishop Romero, the four missionaries and six Jesuits.

"We may not be able to find solutions to El Salvador's problems, but in walking with people, sharing their stories and testimonies and showing our caring we can become what Jose Artiga (executive director of SHARE) calls ‘an extra lung when they are running out of air,'" Sister Barbara said.

"There are four ways Salvadorans try to support their families," Sister Rosalie said. "Send someone north, get someone educated, sell something and produce something. Eighteen percent of El Salvador's GDP (gross domestic product) comes from remittances from overseas family members. As Central Americans make the trip north, 1,600 are raped and killed each month. 20,000 Salvadorans are deported every year; that's 55 every single day."

Mariella Araujo, coordinator of Hispanic ministry for Immaculate Conception Church in Fort Smith, said that 20 to 30 percent of the Hispanic population in the parish is Salvadoran.

"The people there live Benedictine hospitality. They are so warm and gracious, and they share all they have with each other," Sister Barbara said. "They lived in a very modest house with a small yard filled with banana, orange and papaya trees, with a beautiful view of sugar cane fields and a distant volcano. We visited the Fatima Shrine with them; people go there every Sunday to pray, sing and celebrate Mass together."

Eight of the Benedictines sisters in Fort Smith are studying Spanish every week with Haymee Giuliani, a Spanish teacher at Trinity Junior High School, and a number of them are volunteering in the Hispanic community in Fort Smith.

The sisters gave a slide presentation at the Dec. 13 Justpeace meeting and hope to continue practicing the "theology of accompaniment" with the local Hispanic community, honoring the four women martyrs, Archbishop Romero, all those who lost their lives in El Salvador and those who are struggling with poverty, crime and violence today.

The trip was sponsored by Pax Christi and the Leadership Conference of Women Religious.