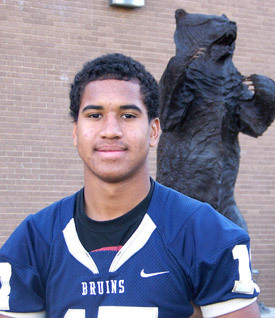 Dwain Hebda
Fredi Knighten, junior quarterback for Pulaski Academy in Little Rock, led his team to the 4A state championship Dec. 10, but he wants people to say, "He's a good guy with good morals."

Dwain Hebda
Fredi Knighten, junior quarterback for Pulaski Academy in Little Rock, led his team to the 4A state championship Dec. 10, but he wants people to say, "He's a good guy with good morals."

Those who follow Arkansas high school football know Fredi Knighten, 16, as the starting quarterback for Little Rock's Pulaski Academy, one of the most heralded programs in the state and a team many pick to return to the top of the heap in the 4A state championships.

It's not hard to understand why -- after losing a one-point heartbreaker to Cabot in the opening game of the year, the No. 2-ranked Bruins reeled off eight wins in a row, averaging 44 points per contest versus their opponents' 19 points per game. Most of the games weren't even that close.

With the post season has come four more wins by an average margin of victory of 28 points and a spot in the Dec. 10 4A title game against top seed Shiloh Christian. It also brought Knighten impressive post-season honors as ArkansasPreps.com's Player of the Year and the All-State 4A-7 team. His regular season stats included 3,385 passing yards and 43 touchdowns, 812 yards on the ground and six scores, and just for fun, he ran back a punt to make it an even 50 TDs.

Like a lot of success stories, his was one that almost didn't happen. As the year began, Bruins coach Kevin Kelley found himself with three quality prospects at quarterback, Knighten among them. All three would see action in the opening games as a sort of living, breathing tryout and leading up to the season, Knighten said he experienced more doubt than he ever had in his athletic career, where his natural ability made him the automatic standout.

"It was my brother who picked me up," he said, referring to his older brother Regi, a former football and track standout for Episcopal Collegiate School in Little Rock and now a biology major at Grambling University. "He told me at this level no one was going to give me anything. If I wanted it, I was going to have to go out and get it. It was up to me."

One thing you notice about Knighten, a junior, is how physically unimposing he is -- at least when he's standing still. When he's on the fly, it's a different matter as the Cabot defense found out in September when he led them on an 87-yard race to the end zone. By the third game, the starting job was his for good.

"As a ninth grader I really didn't know what I was doing but last year we started looking at progressions and different reads and I started to catch on," he said, adding his speed gave his game a dimension that not all quarterbacks have, both mentally and physically. The faster he thought, the slower the game became and the more confidence he developed until now he speaks with a self-awareness and calm that is unusual for someone his age.

Typically, it is hard to pinpoint whom to credit with Knighten's athletic success, as his physical and mental gifts spring from a triumvirate of his biological family, which also includes an older sister Avia, a collegiate softball player at Centenary College in New Jersey, his football family and his spiritual family. In a time when many young people are fortunate to have one person upon which to depend for guidance and support, Knighten enjoys an embarrassment of riches.

For instance, his recognition of when to scramble and when to stand in the pocket is a combination of solid coaching and years of toughening up at the hands of his older brother. His throwing proficiency, sharpened by the Bruin's program known for its air attack, started with his father playing catch to the tune of 500 passes per day. Not only outside on mild spring Saturdays, mind you, but in all weather until it was too dark and then the drills came inside.

"I know what it means to have footballs thrown in my house, yes I do," said his mother, Daphne, a career educator, school administrator and a rock upon which her three children's moral and ethical footing is anchored. "We had a long hallway and his father was on one end and he was on the other."

More than perhaps anything else, it's Knighten's character that bears the handprints of all those who have stood up or stood out to keep him on the right path. Like his mother, his father Reginald is a school administrator, and academic and social apathy were not options.

"I come to school sometimes and I see some of the cars that are in the parking lot and sometimes I think, boy I'd sure like to have a nice new car like that," Knighten said. "But I'd much rather have something that I had to work for and I earned, not something that's given to me."

Today, as much as a standout in the classroom as on the football field, he finds time to speak to young athletes about doing the right thing. An altar server, he has also worked through his youth group at St. Bartholomew Church in Little Rock on projects to provide neighborhood kids with school supplies.

Working to keep youngsters on the straight path is not easy -- even for a standout quarterback -- given the challenges within his community to stray into destructive behaviors. Discussing the missteps and wanderings of kids his own age brings a frustrated tone to his voice. But the young man who wants to one day be a coach looks at it like everything else he has in life. It's simply a matter of applying God-given talents to real world problems in the form of hard work.

"God has a reason for me to be here and to be doing what I'm doing," he said. "He makes it all possible. So how can I not use the gifts he gave me? Sometimes I look at kids my age and I just want to tell them that there's a reason they are here too, but they are wasting it.

"My dad always said, 'You want them to say you are a good person, first' and I want that. I want people to say 'He's a good guy with good morals.' "

See more news and photos of sports in Catholic schools on the monthly "Good Sports" page, only in