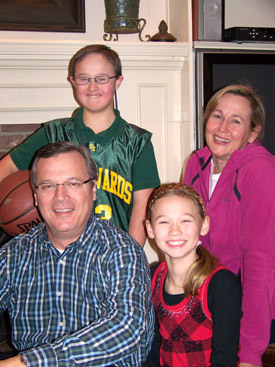 Leslye Gibbens knew her son Benton had the basketball bug bad when on the morning of his first game, she found him up at 6:30 a.m., fully dressed out in his green and gold uniform -- for a 2 p.m. tip-off. The 13-year-old athlete, number 23, stands tall in those duds whether he's the wing for the Dragons of St. Edward School in Little Rock or horsing around with his younger sister Caroline in the driveway.

"You have to put your hands up," Gibbens tells a visitor, stepping into the proper defensive stance. "You have to block out." Then he demonstrates the proper step slide footwork of a good defender before straightening up.

"Defense is kind of hard," he says.

Defense is hard in this game, although it's also where every player who lacked sufficient offensive skills made a name for himself. Basketball is filled with undersized, non-dunking, mediocre shooters who fight and claw their way onto the court as defensive specialists. These are the players who shut down their opponents by harassing them off the dribble, diving after loose balls and turning the tide of games with steals or rebounds.

It doesn't take skill exactly; just work, effort and a passion for not letting what's in front of you get the best of you. Even though he's in his rookie season as a basketball player this fact of the game has been Gibbens' credo for most of his young life.

Dealing daily with the challenges of Down syndrome has put obstacles in his path with which other teenagers, athletes or not, don't have to contend. The condition, a chromosomal abnormality, impairs cognitive and physical development to varying degrees and can make individuals more susceptible to other health problems.

Gibbens personalizes his challenges, as if Down syndrome was a living, breathing nemesis against whom he must compete every day. He's been known to articulate when Down syndrome is getting the better of the daily game of one-on-one they play in the classroom or on the court.

"I hate Down syndrome," he's been known to tell his mother in those moments.

Other times, the condition just can't keep up with Gibbens. Worn down by his passion to succeed and his absolute iron-clad devotion to what he's doing, Down syndrome yields. In these moments, Gibbens says simply, "I can do this."

So it was a couple of months ago when Gibbens brought home a basketball sign-up flyer from school. Already a baseball and tennis athlete, Gibbens knew basketball from the hours he and his father, outdoor advertising executive Tom Gibbens, shot hoops out in the driveway and the many college games they've attended together.

Like many parents of developmentally challenged children, Tom and Leslye have a desire for their child to have the same opportunities and experiences as any other student. But they were also sensitive to the fact that there were other interests involved as well.

"The thing that caught my attention was when they told me he was very competitive and that's what you need in sports," Burks said. "I said let's give him a shot."

Burks had never before worked with a special needs athlete and so he made the only concession to Gibbens's condition that he could think of, which is to say none. Gibbens puts in the same practice as the teammate next to him and when execution is lacking, he runs the same laps as a consequence.

"He doesn't get any special privileges, and I think that has helped him," Burks said. "He's done very well; he's a better player than people think.

"Honestly, I wish I could take some of what he's got and put it in my other players. There are times when they're just going through the motions, and Benton always gives 110 percent."

Little Rock Parochial League rules state each player must play one full quarter without being substituted in an effort to give all players a chance at meaningful game time. The Gibbens asked, and through the combined efforts of school administrators and league officials received, an exemption to that rule. This means in an era when many sports parents scream about their kids not getting enough playing time, the Gibbens wanted Burks to have the flexibility to use their son in a way that benefited all.

"This had to be a good deal for everybody," Leslye said. "There were other players and their families who would be impacted by this, and we wanted everyone to have a positive experience, Benton included."

All hurdles cleared, Gibbens has settled into the routine all players his age experience. The school day is followed by Burks' practices, then home for dinner and studies. Gibbens faces the same high expectations in the classroom as well on the court, thanks to his resource teacher Patty James and the general environment of inclusiveness St. Edward School engenders. It's what brought the Gibbens to the school after moving here from Texas eight years ago and following a nonproductive foray into public schools.

"At St. Edward, it's a team, they are willing to adapt and to modify according to a student's needs," said Leslye, herself a preschool teacher and tennis coach. "Gibbens needs to be challenged and he needs to be disciplined at times, just like anybody else."

Gibben's spot on the Dragon basketball team rounds out his place in this school, long known for diversity. Tom Gibbens said the socialization benefits have been significant, thanks mostly to his teammates' attitude of inclusion, one not always found in youth sports and especially among middle school boys. Gibbens has often been assisted in practice by his teammates and he got two shots in a recent win over Christ Lutheran School of Little Rock, one of which nearly went in.

"I think people thought we were feeding him the ball, but the fact is, he was open and the boys made a good pass," Burks said. "He was very happy after that game."

"My teammates have my back," Gibbens said. "They're awesome. I want my team to get the trophy."