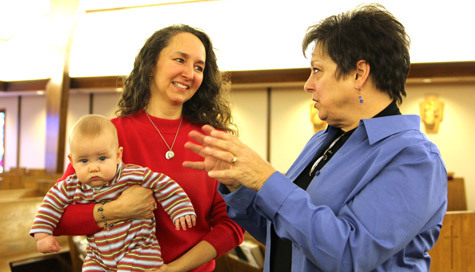 Phyllis Hemann
Natalia Clark holds her son as she talks with Pat Kaminsky about "Landings," which welcomes Catholics back to church, beginning March 16 at St. Jude Church in Jacksonville.

Phyllis Hemann
Natalia Clark holds her son as she talks with Pat Kaminsky about "Landings," which welcomes Catholics back to church, beginning March 16 at St. Jude Church in Jacksonville.

As a way to reach out to Catholics who are not participating in their faith, parishes around Arkansas are holding special programs to welcome them back to Church.

"The largest religious denomination in the world is Roman Catholic and the second largest is the fallen-away Catholics," said Beth Roberts, director of religious education at Christ the King Church in Fort Smith. "They often think they're excommunicated because they've done something to separate themselves from the Church."

Catholics fall away from the Church for many reasons, Natalia Clark of St. Jude Church in Jacksonville said.

"I didn't have a car in college. It was about a 15-minute walk to the church. It was hard to get there, and I was looking for an excuse," she said. "And I stopped going. It was 12 years later that God literally called me home."

She knows firsthand how easy it is to lose your faith, and how fulfilling it is to return to it.

"It's peace. I'm home." Clark said. "I've lost four babies and I know that I couldn't have survived that without God. Knowing that God is with you know matter what, even burying your children. He is with you there and he will take care of you. It doesn't make it easier, but you know you'll make it."

Often when Catholics have left the Church, Roberts said, they don't feel they can return.

"Very often it is a misunderstanding that's kept them away from the Church," she said. "They have to forgive themselves and the Church for being human at times."

The programs help those who catch up on their faith and what's happened since they've been gone. Many have forgotten what Catholics truly believe, and many left because they misunderstood Church teachings.

"At least half the people who go through the program say they've been attending at Protestant churches," Roberts said, "but they're not being fed. Something is still missing for them, and that is the Eucharist. It's important to offer them a way back."

The programs have a variety of structures ranging from six to nine weeks, small group sharing, private counseling and ongoing series.

Christ the King Church in Fort Smith recently wrapped up a session of "Catholics Returning Home," which they hold three times each year for six weeks at a time.

They always have only a handful of participants, but it works well because the program is geared more for small groups, Roberts said.

"There is something very healing about it. It's good that they have a way to talk through misconceptions," she said.

This is the third year that they've offered the program. They've advertised on the radio and through the bulletin, especially during Christmas and Easter when many non-practicing Catholics return out of tradition or with their families. So far, Roberts said, the bulletin was the most effective for their program.

In seeing the pain and loss those who come to it reveal, it is rewarding that the Church can offer them comfort.

"They're looking for what they're missing, and it boils down to the Eucharist," Roberts said. "The Church is more about love now than ever before. It's never too late to fix it. There is forgiveness. The mercy and love of God is so huge, and we want to bring that back into their lives. We will do anything we can to get them back in the pew."

St. Jude Church in Jacksonville is beginning a program for returning and non-practicing Catholics called "Landings," which they will offer twice a year.

Pat Kaminsky is leading the team at St. Jude. She herself was a "sporadic" Catholic, who left the Church completely after the death of her son from cancer in 2006.

"Having felt injured by and being out of the Church, I know what these people are going through, she said. "I've come back with a vengeance and a passion to show love, which I think is a gift from the Holy Spirit."

Now that she has returned, which she credits to meeting vicar general Msgr. Scott Friend who became her spiritual advisor and helped her deal with her son's premature death and reconcile with her faith, she wants to help other lost Catholics experience healing.

"When you talk to people about this, you see the pain in their faces and then you give them hope. They don't think they're welcome back," she said.

They advertised the program where they felt those who needed to see it would — in the mainstream media with newspaper ads, a billboard and television commercials. They also included pew cards and bulletin announcements.

"We had to get out where the people are," Kaminsky said. "When I was away, I didn't read anything related to the Catholic Church. I wouldn't have seen it if that was the only place it was."

The commercials feature Clark, who is on the St. Jude Landings team. So far, they've received a couple of referrals from parishioners, and the rest have come from the ad in the Arkansas Democrat-Gazette.

The program limits the number of people per group, and this time they may have more than one group. The groups will meet beginning March 16. Prior registration is required, as participants are matched with teams.

At Christ the King in Little Rock, they started an ongoing program called "Welcome Back Home" in January that offers presentations by the pastor or associate pastor on faith topics.

Director of religious education Delia Barr said so far they've toured the church and discussed parts of the Mass and the Eucharist.

"They love it and are so happy to be here. They're anxious to come back and hear more," she said. "This whole experience has been very inspiring for all of us."

It started in January, but people can still come to the Wednesday night meetings at any time. The current program will last through Palm Sunday, April 17, but they plan to start a new series at Easter.

During the process, Barr said, participants will each meet privately with pastor Msgr. Francis I. Malone, so he can see what their needs are.

"Some are on different journeys, so it's important for us to take our cues from the participants. We want there to be a sense of welcoming that they can come back."

Barr said they put announcements in the bulletins and pew cards during Christmas and Easter.

"One person is worth it," Barr said.

By offering programs reaching out to lost Catholics, Kaminsky said, these program rebuild their faith and heal their spirits.

"They feel angry at the whole Roman Catholic Church. To watch their faces, excited to come back and talk. The only word I can think to describe it is amazing," she said.