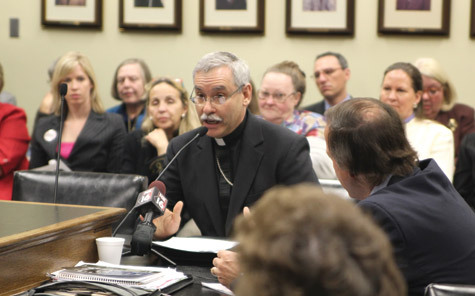 Phyllis Hemann
Bishop Anthony B. Taylor testifies against House Bill 1292 at the State Capitol Feb. 23. The bill proposed limiting all state benefits only to legal residents, which he said was "bad public policy" and could hurt poor women and children.

Phyllis Hemann
Bishop Anthony B. Taylor testifies against House Bill 1292 at the State Capitol Feb. 23. The bill proposed limiting all state benefits only to legal residents, which he said was "bad public policy" and could hurt poor women and children.

Bishop Anthony B. Taylor testified against House Bill 1292 before the House Committee on State Agencies and Governmental Affairs at the State Capitol in Little Rock Feb. 23.

"Stated simply as discussed, not providing prenatal care for pregnant women or immunizations for children and adults will cost the state more money in the long run, and the state will also be burdened with extra administrative costs," Bishop Taylor said as he testified before the committee last week.

The House Committee Room 151 was standing room only as the bishop testified and the committee considered House Bill 1292.

If passed the bill as originally written would have limited any state "benefits" to illegal or undocumented people, including immunizations, non-life-saving emergency care and prenatal care.

Hours of committee questions, debate and public testimony, centered on which "benefits" it would restrict and what it would require of the state before it was defeated.

The Diocese of Little Rock worked years earlier to address the need of poor immigrant women experiencing complicated pregnancies but unable to pay for medical care. Sister Joan Pytlik, DC, then-diocesan legislative advocate, heard of the need firsthand from nurse-midwife Sister Janina Zilvinskis, DC, who worked with women at the University of Arkansas for Medical Sciences.

"She saw the results of so many women with complicated pregnancies because of the lack of prenatal care. These women couldn't get a doctor because they didn't have Medicaid."

Sister Janina along with two other colleagues started a charitable clinic at St. Edward Church in Little Rock to help women with prenatal care. There were still many who needed further doctor's care to ensure a healthy birth, but Sister Joan said they were without that option because of their status.

At the time, a federal option was offered to states to cover an unborn child as a U.S. citizen, as the child would be born on American soil. In 2002 Sister Joan approached Ray Hanley, Medicaid director under then-Gov. Mike Huckabee, and asked if these women could have prenatal care under Medicaid.

The two arranged a breakfast meeting between then-Bishop J. Peter Sartain and Huckabee to debate the issue. At the end of the "lively hour's conversation," Huckabee said "Covering these women meets my pro-life views and it makes sound economic sense." He turned to Hanley and said, "Let's do it."

Since that time, Arkansas and 10 other states have enacted this option.

"A single bad birth outcome can send a child to Arkansas Children's Hospital at a cost of more than $2,000 a day and if there are developmental problems, even cause a lifetime of institution costs to the taxpayer. Access to quality prenatal care is the best way to avoid such risks," Bishop Taylor wrote in a letter to the committee.

While many argue that limiting benefits will reduce costs to the state, both Bishop Taylor and Sister Joan said that in the long run it costs more if children and adults are unhealthy because of the lack of preventive care.

The bill was amended multiple times during the day, with the largest being an exception for prenatal care.

Still, a majority of committee members said the bill was vague and was addressing benefits to which undocumented people do not have access like unemployment and workman's compensation.

The committee defeated the bill with a vote of 8-9.

When emotions are involved over the immigration issue, Sister Joan said it often clouds judgment.

"Immigrants are part of God's family. Bishop Taylor has made that clear in his pastoral letter ( "I Was a Stranger and You Welcomed Me: A Pastoral Letter on the Human Rights of Immigrants")," she said. "The humane thing to do, the Christian thing is to take care of people who need help."