Senior swimmer, a favorite to win at state, is catching the eye of college programs 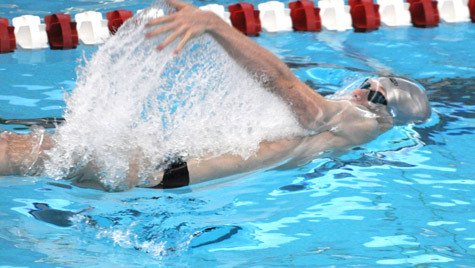 Sam Olson competes in the 100-yard backstroke at the high school state championship in March 2010. His third-place finish qualified him for the Junior Nationals.

Sam Olson competes in the 100-yard backstroke at the high school state championship in March 2010. His third-place finish qualified him for the Junior Nationals.

Sam Olson is one fast swimmer. Fast enough to win titles at the highest levels of his club and high school competitions. Fast enough to grab the attention of Division I and Division II college teams from Michigan to Missouri and fast enough, perhaps, to one day qualify for the Olympic trials, a lifetime athletic goal.

You’d think someone as fast as Sam Olson would have earned a suitably speedy nickname like Stingray or Swordfish or something intimidating like Barracuda. Heck, just adopting Catholic High School’s mascot -- The Rocket -- would do. Anything but …

“Stick Boy,” Olson said. “I’m 6’ 3” and weigh 145 pounds. I’ve always been tall and skinny, and my teammates always used to yell it in practice. I give them a lot of credit. They motivated me.”

With a name like Stick Boy, he has to be good and Olson is. As a junior, he took second in the state high school meet in the 200-yard freestyle and third in the 100-yard backstroke, qualifying for Junior Nationals in both events. This year, he took second in the 100-yard backstroke and won the 200-yard freestyle.

But it was in the 200-yard backstroke at last summer’s Junior Nationals in Irvine, Calif., where Olson displayed the true measure of eight years in competitive swimming. Entering the meet seeded 96th, he posted a time that was the best of eight full heats, landing him in the B Group final and ultimately a 14th place finish.

“I was feeling really good that day, I was focused and I was ready,” he said.

The finish started the phone ringing and Olson was flooded with offers from collegiate programs including the U.S. Air Force Academy, University of Wyoming, University of Michigan and Eastern Michigan, to name a few.

The attention was, in Olson’s words, “a little overwhelming” especially considering how close he came to stepping out of the pool for good. Around age 10 he started like most competitive swimmers, on a local club team, the Little Rock Dolphin Lasers. He quickly discovered that the physical dimensions that worked against him in other sports interests didn’t matter in the pool.

“I always played everything,” he said. “As a kid I played football and basketball, and I still love to play basketball, but I couldn’t see myself doing that at a high level. But in swimming, it’s different. It’s not the biggest guy that wins.”

Olson also brought a sharp mind to the activity. Part of his development was for his coach to point out swimmers at meets with particularly strong strokes or excellent form, and Olson would study their technique as they raced. He found he had an excellent memory and could emulate what he saw during his next practice.

By the time he was 14, he was a full-time competitive?swimmer. Though he was gaining success in the pool, his life outside swimming was undergoing a lot of change. Dissatisfied with his first year in public high school and an unrelenting training and competitive calendar, he considered dropping out altogether. His mother, Kristie Olson, suggested a transfer to Catholic High School and coached him through the transition. It was, he said, a singular moment in his athletic career.

“My mom has done everything for me in swimming,” he said. “She supports all of my goals and even when I got to a point where I didn’t like it and wanted to quit she kept me in it. I probably wouldn’t be in swimming right now except for her.”

The change in high schools had an enormous impact on Olson and he immediately fell in love with the unique environment of Catholic High, so much so that it went against the grain of the unwritten “club team first, school team second” mantra of competitive swimming.

“I give my club coaches all the credit for teaching me everything I know about swimming and making me what I am today, but I love my high school and I have a lot of school spirit,” he said. “I always tried my hardest for the Rockets to bring us a state championship.”

Catholic High proved as committed to the young athlete as he was to the Rockets, adding one final element to Olson’s arsenal. While he had grown accustomed to the physical rigors of elite level competition -- six days a week of early morning swims and weight room work, followed by two and half hour practices in the afternoon, 48 weeks out of the year -- CHS’ academic rigors and no-excuses standards sharpened his mental toughness.

“If it wasn’t for Catholic High School, I wouldn’t be the better person that I have become in swimming and in school,” he said.

With the high school season now over, Olson decided to skip Junior Nationals in order to soak up the last couple of months of his senior year. He accepted a swimming scholarship to Drury University in Springfield, Mo., a Division II school with 19 consecutive collegiate swimming titles to its credit.

“I’m a very competitive person and I love the feeling of racing,” he said. “The adrenaline rush you get when you step up on the block -- it’s just the best.”

See more news and photos of sports in Catholic schools on the monthly "Good Sports" page, only in