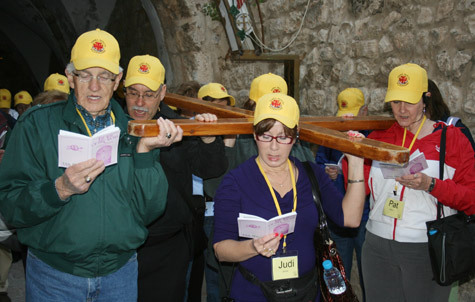 Catholic pilgrims got to touch, hear, see and smell the sights of the Holy Land March 17-27 on a pilgrimage as part of Arkansas Catholic’s 100th anniversary.

Bishop Anthony B. Taylor, who visited Israel only once before for a study tour in 1977, served as the spiritual director for 136 pilgrims. The trip was organized by Father Alex Kratz, a Franciscan priest in Detroit and co-founder of Terra Sancta Pilgrimages. Cackie Upchurch, director of Little Rock Scripture Study, delivered reflections and led the music for Masses. Several priests and deacons on the trip also assisted with reflections and delivering homilies.

The reality of Christians living in the Palestinian territories was quickly brought to life. On their first stop in the Holy Land, the pilgrims celebrated Mass with Bishop Taylor at Our Lady of Fatima Parish in Beit Sahour. Pilgrims donated $1,865 as well as musical instruments and sheet music to the parish, which is starting a music center. Most of the instruments came from Our Lady of Good Counsel Church in Little Rock, which closed its school in 2006, The music center is critical because parishioners are restricted from traveling outside of Palestine for music instruction. Pilgrims also donated $2,000 and school supplies to St. Joseph School in Jifna in the West Bank.

On their second day in Palestine, Bishop Taylor and Father Kratz led a rosary for peace in front of the Israeli “Separation Wall,” which was built in 2002 to prevent Palestinian attacks. The barrier is a series of barbed-wire fences, security roads and cement slabs.

“We pray that they will break down walls, not build barriers,” Father Kratz said.

That evening, president Brother Peter Bray, FSC, and about 20 Muslim and Christian students from Bethlehem University visited the pilgrims’ hotel to tell their stories. Many of the students agreed that they have considered studying abroad to escape the hardships of Palestine and the Israeli checkpoints and to have more opportunities.

Christians today make up 32 percent of Bethlehem, but it was 79 percent 25 years ago.

“There is a big concern that Christians will disappear from Bethlehem,” tour guide Basem Sabat, who lives in Bethlehem, said.

Each day Bishop Taylor celebrated Mass for the pilgrims at various holy sites. Instead of following the Lenten readings for Mass, the Masses for Christmas, Easter and other feasts were celebrated with appropriate songs.

In hilly Bethlehem stops were made at the Grotto of the Nativity to visit the spot revered as where Jesus was born, St. Catherine Parish where the midnight Christmas Mass is televised from, and Shepherd’s Field Church.

The pilgrims then traveled to Jerusalem on March 20 to visit the Temple Mount, where Jews pray at the Western Wall, also known as the Wailing Wall, and the Dome of the Rock and Al-Aqsa Mosque, Islam’s third most sacred site. When entering the temple area, the pilgrims were instructed not to carry a Bible or wear a crucifix.

Within Jerusalem’s Old City, there are several sites important to Catholics, including the Pools of Bethesda where Jesus healed the sick man; the Crusader Church of St. Anne, the birthplace of Mary; the Chapel of the Flagellation; and the Chapel of Condemnation.

On March 21, the pilgrims spent the day on the Mount of Olives. In the morning they visited the Chapel of Ascension, the site where Jesus ascended into heaven, which was converted into a mosque; the Church of Pater Noster, where Jesus taught his disciples the Lord’s Prayer; and Dominus Flevit, a church overlooking the Temple Mount where Jesus wept over Jerusalem.

One of the highlights for the pilgrims came when they were allowed into the private area for prayer and confessions for three hours in the Garden of Gethsemane, where Jesus prayed with his disciples and was betrayed by Judas.

“I looked down and saw eight people laying down and it looked like the apostles who were sleeping. I was praying the same prayer Jesus was praying,” said Lisa Nagel, a member of Christ the King Church in Little Rock.

They then walked to the Basilica of Agony where inside is the Rock of Agony, which pilgrims reverently touched as the site where Jesus prayed and sweated blood the night of his arrest.

The pilgrims returned to the Temple Mount at 5 a.m. the next morning to walk the Way of the Cross, or Via Dolorosa, with four people carrying a large wooden cross at each station through the Old City. The last five stations are located inside the Church of the Holy Sepulcher, the site where Jesus was crucified, died and was buried.

On Mount Zion, the pilgrims saw the Upper Room where Jesus instituted the priesthood and the Eucharist, and the Church of St. Peter in Gallicantu, where Caiaphas the High Priest was believed to live. Tradition says Jesus was jailed and scourged overnight in a pit there, and is where Peter denied Jesus three times before the cock crowed.

On their way to Galilee March 23, the pilgrims stopped for a quick swim and mud bath in the Dead Sea and visited the Grotto of the Annunciation in Nazareth. On their first morning staying at a retreat center on the Mount of Beatitudes March 24, the pilgrims gathered for Mass at an outdoor amphitheater looking over the Sea of Galilee.

Another memorable experience came when pilgrims boarded two wooden boats for a ride on the Sea of Galilee. A storm rocked the boats, making the Gospels come alive.

“It was like God scripted it,” said Bob Plante, a member of St. Jude Church in Jacksonville.

At St. Peter Church in Capernaum, built over Peter’s mother-in-law’s house where Jesus healed people, the bishop and priests led a tearful healing service, praying over individuals and couples.

At a baptismal site on the Jordan River, Bishop Taylor led a renewal of baptismal vows and people filled bottles of water to take home.

On March 25, vans took groups of pilgrims up Mount Tabor to the Basilica of the Transfiguration. At the Cana Catholic Wedding Church, couples renewed their wedding vows. That evening, three cakes topped with sparklers were served at an anniversary party to mark the newspaper’s 100 years.

Before heading to the airport March 26 in Tel Aviv, the pilgrims stopped in Haifa at Stella Maris Monastery, where the Carmelites were founded, and the Cave of Elijah.

“The Holy Land is not an easy place to visit, but for that very reason is the most inspiring pilgrimage you will ever make and now you are returning home having actually seen the very places where the most important events in the history of our salvation took place,” Bishop Taylor said in a homily at the closing Mass at St. Peter the Apostle Church in Jaffa.

In addition to the pilgrimage story, you can also read comments from the pilgrims here.

Listen to the bishop’s homiles in Jerusalem, Nazareth and Jaffa at http://www.dolr.org/audio/index.php