Time Capsule 1914-1916A 33-part series on history mined from the first 100 years of Arkansas Catholic and its predecessors. 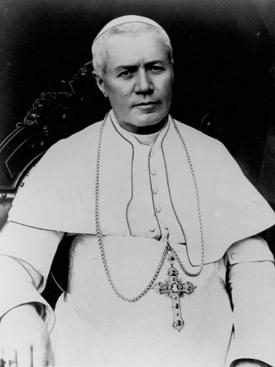 File
The Aug. 22, 1914 issue of The Guardian announces the death of Pope Pius X. His sorrow over the war was cited as a cause of his death.

File
The Aug. 22, 1914 issue of The Guardian announces the death of Pope Pius X. His sorrow over the war was cited as a cause of his death.

The Southern Guardian continued as a weekly eight-page broadsheet newspaper during the years of 1914-1916 under the supervision of Father Augustine Stocker, OSB, who worked out of Subiaco Abbey in Logan County.

During this time, the paper became merely The Guardian. "Southern" was gone from the paper's name with a brief editorial note reflecting on the name change.

With the new name also came a fancier look for the masthead and headline typeface. The elegantly scrolled script gave the paper more of a biblical feel, although not as easy to read. The period of 1914-1916 was a volatile one on the world stage. The Catholic Church lost a pope when Pope Pius X died on Aug. 20, 1914, and elected a new one with Pope Benedict XV who was surprisingly unknown to many.

Bishop John B. Morris found himself wrapped up in these world events, after traveling to Rome in June aboard the RMS Lusitania. He returned in September of the same year and was happy to be back with his flock.

"I can say to you again I was never happier in my life than when I saw Little Rock. I am charmed to be home, and I hope the pope will not ask me to go to Rome too often," he wrote. He also wrote of the horrors of war. On his return voyage, a ship built to carry 120 passengers carried over 1,000 people back to America because of the war.

One might expect headlines splashed across the front page declaring the world at war. And yet, that is more of a mainstream idea of today's media. The news of war was framed in the Catholic life and issues that revolved around it -- peace, dignity of human life, prayer, justice and America's role. In the Aug. 8 issue, a map illustrated the armed strength of countries in Europe. In the same issue, the articles discussed "Italy declares its neutrality" and the "Czar lays all blame on Germany." On Aug. 22, 1914,"Pope Pius gone from among men," the front page showcased a photo of Pope Pius X who had died two days earlier.

War stories were rarely on the front page, outside of the pope's death. Commentaries and analysis on the issue of unrest in the world were common in the newspaper. Coverage of the war was spotty at best. At times, a whole page was devoted to "War Notes" with briefs about troop build-ups, battles and movements. Some issues have nothing on the war that was raging across Europe.

One reason for the lack of coverage may be revealed in an editorial by Father Stocker where he takes to task the press coverage and reports as biased.

America also was maintaining a sense of neutrality, while President Woodrow Wilson called for Americans to pray for peace.

"The horrors of war have been the theme of many recent lamentations. We seem to hear the disconsolate cry of mothers, wives and children; our ears are haunted with the moan of mangled armies scattered over fields of battle ... And yet the picture is not all dark: there are lights amid the shadows," Father Stocker wrote in an editorial on how war changes us. "And, finally, a thorough shaking up will do the modern world good from a spiritual point of view. Men had forgotten their Creator in their pride and abundance … Distress teaches one to pray."

The Mexican revolution was also covered in the paper, especially with regards to how Catholics were faring in the conflict. A group of nuns exiled from Mexico stayed briefly in Tontitown before moving on to serve in Cuba.

This time also saw the death of the first editor of the paper, Msgr. J.M. Lucey. In the April 4, 1914, issue, headlines touted him as recovering. The front page ran a photo of Msgr. Lucey June 24, with the headline "Christian soldier and Confederate veteran responds to death call of great commander. Monsignor Lucey gone to reward." Msgr. Lucey also served as vicar general for the diocese and was the first priest honored as a monsignor.

Throughout 1914-1916, Catholic pioneers in Arkansas continued to establish their identity and homes in Arkansas, even in the face of discrimination from sections of Protestants in the state.

A mainstay in spreading the word about the Catholic faith the year earlier, the Chapel Wagon took its winter break, not to return again. At the end of the tour, Father Boniface Spanke, OSB, became embroiled in a heated debate with a noted anti-Catholic lecturer from Ohio, Rev. O.L. Spurgeon.

The publicity and controversy over the debate upset Bishop Morris. While never revealed in the newspaper, Bishop Morris stabled the Chapel Wagon (also called the Gospel Wagon in Subiaco's history), even though he previously supported the missionary work.

The work of evangelization and reaching out to the non-Catholic community did not stop. Missions and lecture series were commonplace throughout this time, explaining the beliefs of the Catholic faith and personal stories of why people were Catholic. The Paulist Fathers came to Arkansas regularly to hold missions.

While it was largely ignored for a year, the Posey Bill returned in 1915. Originally it passed the Arkansas House, but died when the Senate's session was over. This time the bill passed. The first official inspection came in May 1915 when St. Joseph School and Convent in Mena were inspected by the Polk County Sheriff and a health official, after 20 men signed a petition asking for the inspection.

Catholic institutions in Arkansas continued to serve people of all faiths. The quality of care for all patients was regularly discussed in articles -- even one in 1914 that touted St. Vincent Infirmary as the best out of 21 hospitals serving the Iron Mountain railroad. Another article on St. Joseph Orphanage discussed how out of 127 children at the orphanage, 80 were non-Catholic. The children were healthy and blossoming under the care there, treated to picnics and special outings when able.

Arkadelphia Milling Co.: Robin Red Breast Flour, the heart of the grain plus the art of the brain

Southwestern Telegraph and Telephone Company: Every hour in 1914 will find your family protected if you install Bell Telephone Service in your house now

Draughon's Practical Business College: A peep into the future