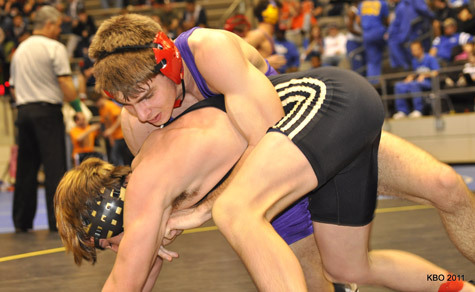 Catholic High School senior C.J. Egle wrestles in the state tournament Feb. 26 at the University of Arkansas at Little Rock. Egle and three other seniors were leaders of the school's team this year. The team placed ninth in the tournament.

Catholic High School senior C.J. Egle wrestles in the state tournament Feb. 26 at the University of Arkansas at Little Rock. Egle and three other seniors were leaders of the school's team this year. The team placed ninth in the tournament.

Not long ago, the only version of wrestling happening in Arkansas was the body-slamming, made-for-TV stuff that showed up at local arenas from time to time.

But in just five years, the classic hand-to-hand grappling that started with the ancient Greeks has grown by leaps and bounds in the state. And as it has grown, so has the success of the Catholic High School wrestling program, led by head coach Paul Mammarelli.

"Our program was popular from the start, but like any new sport, it takes a little time to get going," he said. "We've had nothing but 100 percent support from our administration."

Catholic's program was among 19 Arkansas high schools to offer wrestling as a club activity in 2006. About 20 athletes showed up that first year and it's fair to say they were far more familiar with the metal chair-swinging "wrasslin'" than the art of strength, technique and strategy that is competitive wrestling featured in the Olympics.

"That first year, only one person on the team had any, and I mean any, experience whatsoever," Mammarelli said. "Arkansas isn't Iowa or Pennsylvania where wrestling is such a part of the sports culture and guys have been at it since they were babies. We start from scratch every year."

Despite this lack of grassroots knowledge about the sport, Mammarelli and his coaching staff have led athletes to success at the highest levels of the state's competitive bracket. The very first year, the Rockets produced an Arkansas Wrestling Association state champion. Three years ago, the sport had developed sufficiently for the Arkansas Activities Association to sanction a state championship tournament.

That first year, Andrew Wells became CHS's first AHSA wrestling state champion in the Class 6A-7A division, winning the 130-pound weight class. Last year, the Rockets brought home two gold medals, one at 145 pounds in Steven Gorgas and one at 160 pounds in Dexter Carter. Carter holds the additional distinction of the being the first graduate of the program to wrestle at the collegiate level having landed a wrestling scholarship to Ouachita Baptist College.

The 2011 state championship, held in February, yielded another first as Collin Chambers became the first freshman to win a state title. Chambers, who posted a regular season in-state record of 27-1 at 103 pounds, started among the ranks of the uninitiated but advanced quickly. Chambers didn't lose until January when he came up against a senior from Beebe who would go on to win a state title of his own at the 2011 meet in the Class 1A-5A division.

"Every year, we start over with a bunch of guys who have never seen a wrestling match until they show up for the first practice and they are in one," Mammarelli said. "Collin didn't know anything about wrestling moves or holds, but he had that something that told us he could move immediately to the next level. Some kids just know how to position themselves and as coaches we recognized him as a natural."

The 2011 Rocket team placed ninth at the state meet, a middle of the pack showing that doesn't tell the true story of the team's season. The Catholic squad lost three returning state qualifiers to season-ending injuries, spots filled by far less experienced underclassmen. By the time they got to state -- where unlike other individual multi-divisional sports where athletes qualify in events at a district meet, wrestling's rules allow each team to bring up to 14 competitors, one in each weight class -- seven of Catholic's squad were freshmen,

This not only forced them to mature as competitors, but also demanded the team's four seniors, C.J. Egle, Hunter Cox, Josh Nguyen and Matt Tuputala step forward into positions of leadership. Mammarelli said their performance in this area was crucial and had much more impact than anything the coaching staff could have done.

"As coaches, we learned a long time ago that you can drill them every day on character and talk until you are blue in the face about competing and all of that is great stuff," he said. "The fact of the matter is, these are still young high school guys and young high school guys are influenced by their peers first. Our seniors showed they were leaders first and good wrestlers second."

Nowhere was this on more public display than at the state tournament. In the 140-pound bronze medal match, Egle showed his teammates what composure and conditioning meant as he outpointed his opponent in double overtime, the equivalent of six timed periods on the mat.

Meanwhile, Cox taught his younger teammates lessons in character. Placing fourth in the 171-pound division, Cox received the inaugural Victory with Honor Award, denoting a wrestler's demonstration of sportsmanship and fair play as voted on by coaches and referees at the state meet. Cox, who was known to hoist his victorious opponents aloft and shake opposing coaches' hands after matches, defined winning in broader terms for his teammates.