The Guardian joyfully proclaims peace in issues of 1919

Time Capsule 1917-1919A 33-part series on history mined from the first 100 years of Arkansas Catholic and its predecessors. 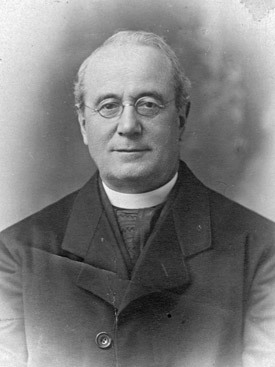 Father Pietro "Peter" Bandini's death is reported in The Guardian in January 1917. Father Bandini led Italian immigrants from New York to Arkansas where they established Tontitown.

Father Pietro "Peter" Bandini's death is reported in The Guardian in January 1917. Father Bandini led Italian immigrants from New York to Arkansas where they established Tontitown.

The Guardian ushered in the years of 1917-1919 still publishing eight broadsheet pages a week under the editorial guidance of Subiaco prior Father Augustine Stocker, OSB.

The first issue of 1917 announced the news of the death Father Pietro "Peter" Bandini, pastor of St. Joseph Church in Tontitown, who died three days earlier after "a brief illness." Father Bandini came to Arkansas leading a group of Italian immigrants from New York who started a colony in the Tonitown area, with some resistance in selling them land. The paper reported that people in the area had never seen an Italian, let alone a Catholic, before Father Bandini shepherded his flock to the area.

The United States was no longer removed from "The World War." America, which was neutral since the war began in Europe in 1914, became involved in the war on April 6, 1917. After war was declared, the editorial page included an American flag illustration in every issue from April 14, 1917, to July 1919.

News coverage shifted from occasional commentaries to weekly articles and commentary on the ongoing struggles of the nation at war. The Knights of Columbus began an active committee that raised funds for the war, and a weekly update on their war activities ran in the paper. They raised millions and had more than 1,500 volunteers with many as "war workers on the front."

The coverage still focused on the Catholic perspective, but also contained more of a focus on what was happening in Europe and how it was affecting the people there. The pope was constantly under scrutiny for his neutrality and plea for peace from all sides. A headline from the March 2, 1918, issue illustrates how the Church viewed the pope's position of support for all people, regardless of which side of the war they supported: "Striving for a just peace. Cardinal Gibbons declares pope to be not an ordinary neutral. Bears sorrows of all. Is universal pastor and like His Master rules not by sword but by love."

Practical advice related to the war was also plentiful, especially in dealing with shortages and rationing of flour, sugar and other items. A headline from April 14, 1917, declared a regional twist on decreasing usage of white flour: "War bread may be used. Whole wheat bread may take the place of Southern biscuits as a war emergency and is healthier."

The paper's editor, Father Stocker, celebrated his silver jubilee in 1917, as did Bishop Morris. Parishes throughout the state honored Bishop Morris with Masses in honor of his jubilee, and a Little Rock event in June 1917 drew 2,000 people to celebrate with him.

The issue of loyalty among citizens of German lineage came under scrutiny during this time, as they and other nationalities were considered the enemy. Subiaco specifically had government officials search their property for arms or signs of sympathy with Germany. An editorial in the April 13, 1918, issue spoke about the loyalty of Subiaco.

"We used to be amused when stories were floating in the air about New Subiaco Abbey being a storehouse of ammunition and guns. But a time has come when such rumors, no matter how unfounded, are fraught with real danger to the institution ... To have approved ourselves to the government should really be enough, but we are willing to have our unofficial fellow citizens from near or far come to us and see for themselves if they can discover the remotest trace of disloyalty. We are unafraid, for innocence begets confidence," Father Stocker wrote.

The Guardian heralded the end of the war in Nov. 16, 1918, with a headline of "'Peace on Earth to men of good will.' Christmas present for the world. Peace terms to follow armistice terms."

Bishop Morris spoke of peace and the need for Catholic support in his Lenten pastoral, published in the March 1, 1919, issue. "This year with the dawn of peace, we are, I hope, facing happier days. Yet, while the war is over, we cannot fail to be conscious of the great difficulties which confront the world in these days of reconstruction, nor can we forget to remind the world, that conflagration of the past four years and a half, is largely the result of unchristian and irreligious principles, which have been permitted to spring up and to grow without hindrance during the past 400 years. Some have asked why Christianity has not prevented this great war. The reply is, that men have refused to submit to the principles of Christianity," he wrote.

The paper continued to follow the peace process, focusing on Pope Benedict XV support and workings for peace and justice among all nations.

War dominates the minds of Arkansans as the U.S. enters the World War

While discrimination against Arkansas Catholics did not go away in 1917-1919, other matters were at the forefront of people's minds.

The issue of how Protestants viewed Catholics continued prominently in the paper, educating Catholics about their faith and how to properly communicate this to those who did not understand Catholic beliefs. Stories that related why people were Catholic were common, including the following from Jan. 13, 1917: "Relates impressions after two years in Church. Convert from Baptist sect tells of beauties of Catholicism and what it means to her."

Missions around the state continued the work of evangelizing and explaining the faith, but do not show up in the paper as often in previous years.

The new Code of Canon law went into effect in May 1918. The Guardian explained the laws in relation to the laity in a Nov. 17, 1917, article, "The New Code of Canon Law will make the present age illustrious. Its relation to the laity. The work, inaugurated by Pope Pius X, and promulgated by his successor, Benedict XV, will go into effect May 19, 1918."

Other issues that affected the Church in America began to emerge, including prohibition, birth control and education regulation.

Prohibition became an issue of contention for Catholics, and worry in regards to the use of wine for consecration. The Guardian followed the issue from when it cropped up in popular sentiment to when it became legislation. An editorial in the Jan. 8, 1917, issue discussed the proposed Webb-Kenyon law. "Nothing of all this is put in jeopardy if, say, one ounce of wine is allowed each priest a day to say his Mass," Father Stocker wrote.

While the issue was discussed, the impact of prohibition on Arkansas Catholics was never covered. Father Stocker did write a five-part series on the issue, exploring the ins and outs of the topics and why it was not a permanent solution to the problem. He looked at prohibition in terms of civil rights, religious freedom, alcoholism (those who liked to indulge a bit too much), society and the economy.

Education regulation and reform also potentially put Catholic schools in jeopardy, an issue that took more prominence in late 1919. A movement to force out parochial schools in favor of federally mandated schools was hotly debated, as was the issue of whether Catholic teachers should be allowed to teach in public schools.

Church growth in the United States: Catholic population over 16 million, an increase of over 10 million in 32 years

How to make butter of good quality

Out of every 100 children, 40 receive no religious instruction

All nations can be friendly the same as states. "What has been accomplished in America can be wrought out of like material in Europe. Democracy is hope of world."

Witnessing right here in Arkansas: Recrudescence of Puritanism. The issue of dancing

All Europe faced by famine -- dark for Ireland

Duty of the woman voter. Suffrage evidence of growing power of the mass of humanity

Put Arkansas "over the top" in sugar conservation as you have done in other things: Help win the war by using less sugar and remember our president's statement "We are all eating now at a common table"

Church lost heavily in the World War. More than half of killed are believed to have been of Catholic faith

Smith-Towner Bill ought to be rejected: Would abolish parochial schools

Knights of Columbus War Fund: serves religious needs of Catholic service men and recreation centres for all regardless of creed