Time Capsule 1923-1925A 33-part series on history mined from the first 100 years of Arkansas Catholic and its predecessors. 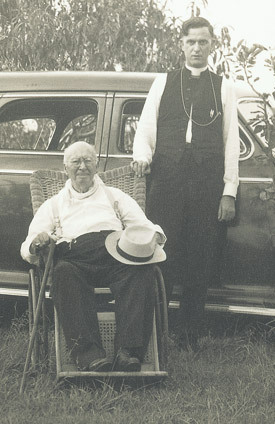 In the 1920s The Guardian, the weekly newspaper under the leadership of Father George McDermott, was challenging to read by today's standards. Very rarely did a news photograph appear in the eight broadsheet pages each week. Articles from the new National Catholic Welfare Conference News Service on national and international affairs would often be mixed with local articles.

Some issues were dedicated to certain institutions in the state. A 64-page to 72-page newspaper was published in December 1923 and 1924 dedicated to the St. Joseph Orphanage in North Little Rock. St. Joseph was described the "most worthy institution in the South."

On page 3 in each issue appeared a column called "Social and Personal" or "Future Social Events." Here were listed short briefs to report when someone had recently traveled to see family and friends. Vacations of priests and weddings were even recounted.

The rise of Father Albert L. Fletcher is reported between 1923 and 1925. Father Fletcher took the helm of Little Rock College in April 1923. "His appointment meets with popular approval of faculty, students and friends of institution. Native Arkansan -- product of our parochial schools, college and seminary, mental and physical prowess ever marked him among his fellows -- executive ability dominated his selection as faculty head," the headline read.

Two years later, in 1925, Father Fletcher was named the spiritual head of St. John Seminary. (He was ordained the auxiliary bishop of Little Rock in 1940 and installed as bishop in 1946.)

In July 28, 1923, it was reported that Father S.J. Peoples, vice rector of the seminary, was in Philadelphia to recruit candidates for the priesthood.

"Conversions are greatly retarded for the lack of priests," he said.

Six men had already stepped up in Philadelphia and said they would join the seminary in Little Rock in September 1923 to study for the Arkansas diocese and other Southern states.

A large portion of page 3 in every issue was a St. John Seminary Burses list naming the burses set up by parishes, priests and families. A burse was complete when $5,000 was donated. A burse was the "sum of money invested and drawing enough interest always to provide board, lodging and training for one seminarian."

The aftermath of the war was still reported. In September 1924, the diocese said it was the 20th diocese to go "over the top." It proved that it sent "more than their fair share of men into the armed services of the United States in the World War." In 1925 it was reported that as Cardinal William Henry O'Connell of Boston laid a wreath on the Tomb of the Unknown Soldier at Arlington Cemetery, a roll call was made naming all of the Catholic men who served "under the American flag" in the World War. A total of 814,768 Catholics served in the war, including 1,048 from Arkansas. More than 16,000 Catholics died, including 16 from Arkansas.

The battle in several states to outlaw private and parochial schools continued on. While Catholic schools reported in 1923 that attendance was increasing, many believed at the time that private schools were "un-American." At the same time it was reported that Bible reading would start in Kentucky public schools and public school children in Charleston, S.C., would be allowed to leave school at 1 p.m. every Wednesday to go to their places of worship for religious education.

In November 1924 it was reported that bills requiring all children between the ages of 8 and 16 to attend public schools were defeated in Michigan and Washington.

In 1925 other Bible reading bills surfaced around the country, including Ohio, Indiana and Illinois. In some places it passed, in some it was tabled and in one case it was vetoed by the governor.

In June 1925 the Oregon law outlawing private schools was declared invalid by the U.S. Supreme Court.

1923 to 1925 was a time of growth in the diocese, with many churches, schools, monasteries and hospitals either opening or moving into new buildings.

The Ku Klux Klan continued to be a problem for the Church, government and local communities. In the Dec. 6, 1924, issue, Bishop Francis Kelley of Oklahoma gave an address, thanking the KKK for providing the Church with $50 million worth of publicity.

"It is a principle of good advertising to get yourself talked about and we intend to capitalize the free advertising the Klan has given us."

In September 1924 Bishop John B. Morris left for Rome for his ad limina visit, which bishops are required to make every five years. A large delegation gathered at Union Station to say good-bye. In the Nov. 22, 1924, issue it was reported that Bishop Morris made his personal visit with Pope Pius XI where they met for more than 30 minutes, discussing their time as students in Rome.

When he returned after three months in mid-December 1924, the front page carried an 8-by-10-inch photo of the bishop with the large headline "Bishop Morris returns from Rome. His homecoming a cordial outburst of esteem by priests and people."

Encyclical letter of His Holiness Pope Pius XI: Ubi Arcano Dei. Reviews the ills of the world is suffering from as a consequence of the Great War concluded in 1918.

First seminary for the training of Negro priests opens in Techny, Ill.

Catholics urged to go to polls on November 4. Data showing striking fact that more than half of the citizenry of the country failed to vote in 1920.

Not one Catholic bishop has been left in Russia. Soviet persecution has driven them out -- priest and nuns imprisoned

Mount St. Mary Academy: The School for Your Daughter or Ward. An institution where your daughter is assured of all the benefits of an exclusive school while surrounded with all the comforts and protection of home life.