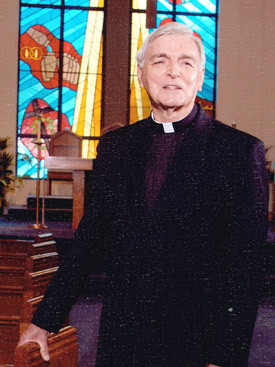 Father Joseph L. Pallo, pastor of Immaculate Conception Church in Blytheville and St. Matthew Church in Osceola, overcame all the obstacles in his path to becoming a priest.

This year, he is celebrating two milestones in his priesthood at once -- his 50th anniversary as a priest and his retirement at age 80.

"I'm grateful that the Holy Sprit has guided me through this fruitful ministry. I have had rich experiences in my priesthood, but I'm almost shocked that I stayed so long," he said in a telephone interview with Arkansas Catholic.

Father Pallo was born in Cleveland to Anna and Joseph Pallo. After World War I, his parents individually came to America from the area that was Czechoslovakia. They met and married in Ohio and raised a family of six children. His family did not speak English until his oldest brother was school-age.

When they asked at the Catholic elementary school who wanted to be a priest, Father Pallo thought about it. His self-esteem was low, he said, especially when it came to public speaking. As a child, he felt he could never be a priest.

At his parish, he wanted to be an altar server, but his brother was chosen instead. He didn't let that stop him. Instead he became an altar server for years for the Poor Clare Sisters of Perpetual Adoration at the Church of the Conversion of St. Paul in Cleveland.

"I would serve on Sundays and holidays. It was far from my home, but it was a special place to me. My religious vocation developed from the time I spent there," he said. "When I was ordained, I celebrated one of my first Masses there."

He was also inspired after he read a book by A.J. Cronin called "Keys to the Kingdom," which tells the story of a Scottish man who becomes a priest and goes to China as a missionary pastor. It was made into a movie in 1944 starring Gregory Peck.

"I was fascinated by the life of a priest. I read the book and saw the movie. It inspired me," he said.

Father Pallo wanted to be a priest, and now that he had taken speech in high school, he knew he could do it. But when he applied to enter the seminary, the bishop in the Cleveland diocese wouldn't accept him as he didn't attend Catholic high school. His parents had sent him to Catholic elementary school but could not afford tuition beyond that.

He read an article in the Catholic Extension magazine about the Southern dioceses, and Father Pallo wrote to Bishop Albert Fletcher and told him his story.

Bishop Fletcher wrote back personally and invited him to Arkansas. He told Father Pallo that he would help him finish his education.

"I came to Arkansas because I felt called to the priesthood. The St. John's Home Seminary was very welcoming. All the priests were very friendly. It was different from what I experienced in Cleveland," he said.

Father Pallo was ordained to the priesthood by Bishop Fletcher on May 27, 1961. He served at Our Lady of Good Counsel Church in Little Rock as an assistant pastor for four years. He then served a year at St. Joseph Church in Pine Bluff and another year as chaplain at St. Vincent Infirmary in Little Rock.

When the seminary closed in 1967, Father Pallo was assigned as youth director, vocations director and head of the pre-Cana program for the diocese. He also started the first Search retreats for youth in the state.

"The youth work was my favorite assignment," he said. "It was the one I found most enjoyable -- seeing the good response from young people to their faith. We couldn't do enough programs to keep up with the response from the youth. It was wonderful."

After 10 years, he transferred to Fayetteville to work in Catholic Campus Ministry.

In 1989, he was sent as administrator of Immaculate Conception Church in Blytheville and St. Matthew Church in Osceola.

"What was temporary became permanent for 23 years," he said. "I have one of the most wonderful church families here. I have been able to touch the lives of the people of Blytheville and Osceola, and in return the people have been very good to me. I will miss them."

Now, Father Pallo said it's time to turn over his flock to another pastor and start a new chapter in his life. He wants to be near family, so he will go to live with his younger brother in Southern California.

"I can't believe it's been 50 years. God has been good to me," Father Pallo said. "It's time for me to make a change. I want to celebrate with family."