Former collegiate runner helps others get into, enjoy the sport 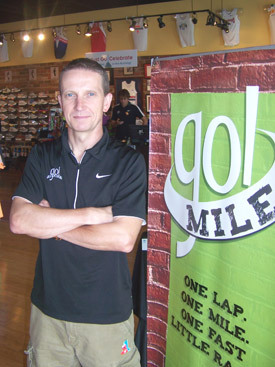 To watch Gary Taylor at work is to watch a man living his passion. In the hip yet accessible confines of his one-year-old Little Rock enterprise Go!Running or at one of the many events the store sponsors, Taylor moves through crowds as smooth and easily as he negotiated the field as a standout athlete at the University of Arkansas.

Hardcore runners share details of their last run with him or pick his brain over shaving seconds off their personal best. Newcomers get started in the right equipment, take advantage of his weekly group runs (which on Cinco de Mayo ended with liquid refreshment and on Gary's birthday at a neighborhood frozen yogurt shop) or just benefit from a laugh and words of encouragement. Scores of young runners are called by name.

If you have never even thought of running and want to keep it that way, stay away from Gary Taylor.

We say right on our website, our mission is to improve the running community in central Arkansas," Taylor said, his British accent hearkening the rapid staccato of foot strikes on pavement. "We set out to create an enthusiasm and excitement for running and I think by our presence we have done that."

For Taylor, running is serious business wrapped in a candy-colored wrapper. Before opening Go!Running with business partner and fellow former Razorback standout Frank O'Mara, Taylor traveled the country and toured successful independent running stores to see what set them apart. He found they had certain fundamental things in common, the most important being a connection with the local running community that went beyond selling shoes and shorts.

"Running can be a tough sport, an unforgiving sport and we saw a void where runners could hang out with other runners," Taylor said. "Runners get sick of coming into the office on Monday morning and wanting to talk about this amazing 20-mile run they did over the weekend and have the people around them zone out after five minutes.

"We wanted Go!Running to be a clubhouse where runners can get with others who get what they are going through, get good service and gain knowledge. Very often people come in just to ask questions and don't buy anything and that's OK because we know that if we take care of them they will be back."

This philosophy extends to local racing events. From the start, the store has lent its support to road races, primarily 5Ks. Its first sponsored race was last year's Rocket 5K supporting Catholic High School in Little Rock. While most assume this is simple marketing, for Taylor it's also product research, a competitive outlet and a continuation of support for the school's running program that goes back to 2004.

That year, Taylor's eldest son was in his sophomore year and joined the cross country team. Gary Taylor, originally lacing up just to run with the team and offer stray bits of advice, was soon promoted to an assistant coach for the team.

A year later, Taylor spearheaded the effort to resuscitate the Rocket track team, which had fallen dormant for two decades but in the time since has produced several individual state champions. The exploits of these young standouts are routinely clipped out and posted prominently at Go!Running, a CHS cross country jersey hanging in a place of honor nearby.

This year, the store will continue its support of the school through its inaugural Go!Mile, a race slated for June 18 at Burns Park Soccer Complex in North Little Rock. All proceeds from the event go to the Winston Penn Wardlaw Memorial Fund, a scholarship program established in 2010 in memory of 2008 CHS graduate and class president Winn Wardlaw to provide scholarships to deserving students wishing to attend Catholic High.

The race is unique, covering a mile instead of the more traditional 5K with divisions accommodating children through elite-level racers. It's just the kind of event one would expect from the Go!Running crew -- creative, accessible and, if Taylor has anything to say about it, fun.

"For those runners who do 5Ks, half marathons or whatever, it's a challenge to see how fast can you go," Taylor said. "It's also a distance that will catch the attention of people who are not running because it is shorter. We hope people will use it as a starting point and feel good enough about finishing that they will stay with the sport."

Arriving in Fayetteville in 1984 as a heralded running prospect who had already competed for his native Great Britain, Taylor ran at a seminal time in the Razorbacks track and field program. Under the tutelage of John McDonnell, Taylor ran in an era when the legendary coach was beginning a championship run that would eventually bring 40 national indoor track, outdoor track and cross country championships to Arkansas.

He won individual honors with back to back Southwestern Conference titles at 1500 meters in 1986 and 1987. In each of his four years at UA, he ran on a distance medley relay team, which set a mark that ranks in the top 10 times in Razorback history. In the 1980s he also discovered triathlon and has participated in the sport as a competitor and certified coach.

Taylor and his wife Erin, who is also an owner in the store, will have been married for 24 years this July. The couple met while both were running for Arkansas and have four children. Son Reed, 21, and daughter Jordan, 20, are both attending the University of Arkansas. Brendan, 15, attends Catholic High and Kieran, 13, is a student at Our Lady of the Holy Souls School in Little Rock.

Though his professional background has always been in IT positions, the passion and expertise he brings to Go!Running is clear -- even if it violates two of the cardinal rules of small business about never going into business with friends and never make a business out of what you love lest it affect your judgment.

"One thing running teaches you is not to be conceited. You can be the best at it and there's still always someone coming up behind you," he said. "I've got a lot of experience and a lot of knowledge but I'm not conceited enough to think I know everything. That's what keeps us evolving."