Midlife is not too late: Finding your vocation in your 40s

More and more women are delaying entering religious life until after getting education, work and life experience 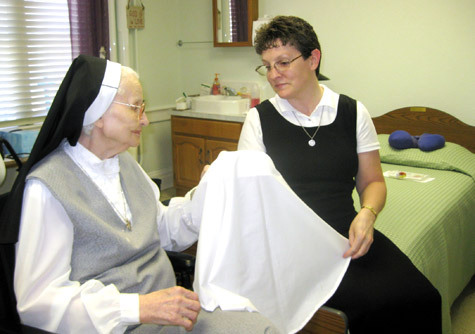 Maryanne Meyerriecks
Sister Corinne Lange, OSB, helps Sandra Nelson, who will become a novice at St. Scholastica Monastery in Fort Smith June 23, prepare the veil that she has chosen to wear as a Benedictine sister.

Maryanne Meyerriecks
Sister Corinne Lange, OSB, helps Sandra Nelson, who will become a novice at St. Scholastica Monastery in Fort Smith June 23, prepare the veil that she has chosen to wear as a Benedictine sister.

Sandra Nelson, 46, a California native, did everything from truck driving to being an electrician's mate in the U.S. Navy before realizing her true calling: to be a nun.

"These things that I was doing were not very fulfilling. I felt for some reason there needed to be more, I was seeking for something more," Nelson said. "I was really tired of spinning my wheels to figure out what purpose was for me when I finally got the call. It was quite a moving experience."

Nelson, who joined St. Scholastica Monastery in Fort Smith in September 2010, is following a trend seen around the U.S. of middle-aged women entering religious life.

According to an article by Catholic News Service, a survey called "The Profession Class of 2010: Survey of Women Religious Professing Perpetual Vows," found that the average age for women entering religious life is 43. The survey -- conducted by Georgetown University-based Center for Applied Research in the Apostolate -- also found that women making perpetual vows in 2010 ranged in age from 25 to 62.

"There is so much to choose from out there and sometimes you have to live a little to figure it out," Nelson said.

Before entering the convent, Nelson's life was far from easy. Though she was baptized in the Catholic Church and received her first Communion in third grade, Nelson said her parent's divorce when she was in first grade stopped her religious involvement.

"Basically, I didn't look to God. God hadn't been a part of my life for a long time," Nelson said. "But I'm not saying God wasn't present in my life."

At 16, Nelson was living on her own in Colorado when she received word that her mother and a brother had been killed in a mudslide in California.

"I was really never mad at God. I knew they were in a good place so I believe my faith helped me get through that," Nelson said.

Nelson said when she received the call from God, she returned to the Catholic Church. Nelson said it took about "four years of conversion and transformation" to lead her to St. Scholastica to become a Benedictine nun.

However, she said entering religious life in her 40s was fitting.

The study also found that half of women entering religious life had attended a Catholic elementary school and had first thought of entering a religious vocation under the age of 18.

Michelle Keller, 40, of Owensboro, Ky., who entered the Olivetan Sisters of Holy Angels Convent in Jonesboro in August 2010, had spent the first 10 years of her education at a Catholic school.

"Actually, I had the calling way back when I was younger," Keller said. "Toward the end here, I've decided to enter and do what I felt is right."

Keller graduated from Apollo High School in Kentucky in 1989.

"I worked the job, had the house, had the car, no kids, no husband or anything," Keller said. "At the time I was at a job I didn't care for, I wasn't happy. That was God's first sign."

Before joining, Keller worked at UniFirst, a uniform factory.

"You lose your independence you're used to but you start to gain it back another way," Keller said. "You feel more freedom when you're praying."

According to the survey, 87 percent of nuns were born Catholic and eight in 10 come from families with two Catholic parents. Judy Timmerman, 45, of Sherwood, who joined the Carmelite Monastery of St. Teresa of Jesus in Little Rock in September 2010, was raised Baptist.

"I joined the Church when I was 32. The rest of my family is not Catholic, and we went to a Baptist church when I was little," Timmerman said. "We kind of stopped going and I would search … for that place where I felt I was at home."

After attending a parish party in Jacksonville, Timmerman went to Mass at St. Jude Church and found that connection, she said.

The national survey found that six out of 10 women entered religious life with at least a bachelor's degree. Timmerman received her bachelor's degree from the University of Arkansas at Little Rock in 2002. She taught at St. Patrick and Immaculate Conception schools in North Little Rock for six years.

When she was in the Rite of Christian Initiation of Adults program, Timmerman said she read an article about the Carmelite sisters and she felt drawn to the order. Though she spent time visiting several different orders, it wasn't until taking a personal retreat during spring break in 2010 that she said she felt a connection again to the Carmelite ministry.

Nelson, Keller and Timmerman all agreed that finding the right order to join can be difficult, as some have age limits.

Nelson, who ran into the "don't quit your day job" attitude a few times because of her age, said she found help from vocationmatch.com, which matches people with religious orders based on compatibility.

"Age doesn't mean much anymore," Keller said. "It can't hurt to try and figure out if you want to do it or not. Try to talk to people."

No matter how long it takes for someone to answer a call to religious life, God is always there, Nelson said.

"Yes, it took me a long time in that desert to find the path, but God waited and accepted me with open arms," Nelson said.