Time Capsule 1944-1946 A 33-part series on history mined from the first 100 years of Arkansas Catholic and its predecessors. 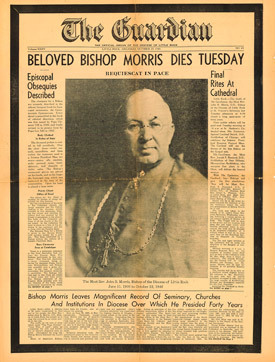 Arkansas Catholic archives
The front page of The Guardian, Oct. 25, 1946, told of Bishop Morris' death. The Tennessee native arrived in Arkansas in 1906.

Arkansas Catholic archives
The front page of The Guardian, Oct. 25, 1946, told of Bishop Morris' death. The Tennessee native arrived in Arkansas in 1906.

One of the major events in the history of the diocese occurred in 1946 when Bishop John Baptist Morris, founder of The Southern Guardian, Catholic High School and St. John Seminary, died after serving Arkansas for 40 years. He was 80 years old.

Then for the first time in diocesan history, Pope Pius XII named an Arkansas native to lead the Diocese of Little Rock. Former Auxiliary Bishop Albert Fletcher was named the new bishop.

The Oct. 25, 1946, issue was dedicated to reporting the death of Bishop Morris. The front-page headline, "Beloved Bishop Morris dies Tuesday," was accompanied by a large photo of the bishop and a thick black border around the page. Cardinal Samuel Stritch of Chicago celebrated the funeral Mass with Archbishop Joseph F. Rummel of New Orleans delivering the sermon.

Auxiliary Bishop Fletcher, who had assisted Bishop Morris for the previous six years, was named the diocesan administrator. Less than two months later, he heard from the apostolic delegate in Washington, D.C., that he would become the fourth bishop of the Diocese of Little Rock.

Articles from 1944 to 1946 often praised Bishop Morris for the founding of the seminary, called "the heart of the diocese." He also established "colored" parishes in Fort Smith, El Dorado and Little Rock, opened St. Joseph Orphanage in North Little Rock and ordained more than 100 priests.

"Very few in the diocese have not been blessed in some way by his personal ministrations," Bishop Fletcher wrote of his predecessor.

Fear increased in Rome as the Allied armies advanced in 1944. German airfields were bombed on the outskirts of Rome, destroying or damaging several churches. Serving in the war was Father Francis X. Murphy, a chaplain in the South West Pacific Theatre of War. In February 1944 it was reported the papal summer residence in Castelgandolfo was struck by bomb fragments, but none of the refugees living in the residence was injured. At the time, no German troops were permitted to enter the summer villa.

On March 1, 1944, bombs were dropped on Vatican property, close to the pope's apartment. The destruction of Rome was a very real worry for Catholics worldwide. The Vatican played an important role in war efforts, operating the Office of Information for War Prisoners. By March 24, 1944, nuns volunteered to sort through more than two million messages from war prisoners to their families.

In the June 9, 1944, issue it was happily reported that Rome fell before the American Fifth Army. It was the 12th time that the Vatican was the site of a war.

"God has crowned our arms with victory and has answered our prayers," Bishop Morris said.

Amazingly, when Sgt. Tom Newton of Little Rock was permitted an audience with Pope Pius XII, he asked the pope for a message to Guardian readers. The short message was, "Do not lose faith in God because of the trouble, destruction and suffering which we all must endure at the present time. Much good will come out of the war, and some day we will understand why God permits such things as war to take place."

Newton was certainly a friend of the diocesan newspaper, submitting occasional articles. He subscribed to the paper and passed it on to others in the 99-percent Catholic Italy.

Arkansans supported the war efforts in 1944 by participating in a nationwide clothing drive, with the goal of donating 15 million pounds of usable clothes for war victims in Europe. A collection was established in 1944 and 1945 for the Bishops' War Emergency and Relief Collection. In December 1945 and May 1946 national food drives were held to help the "war stricken" in Europe and the Far East.

Issues frequently included stories from the front lines, especially how the Catholic military chaplains were doing, and how soldiers were recovering at home after being hit by mortar shells. The "miracle drugs" of penicillin and sulfa were touted as the reason many of these men were able to recover so well.

The victory in Europe was covered with a short article in the May 11, 1945, issue along with several front page photos. Nearly six years of "strife and history's boldest attempt to enslave nations was received with prayers of thanksgiving." Adolf Hitler committed suicide and German forces surrendered.

In the issues following the end of the war in Europe, articles detailed the correspondence exchanged between the Vatican and the German Reich. A Mass was held in Paris in August 1945 to honor the "war victims and prisoners tortured to death in Nazi concentration camps." Victims wore their "prison garb" as a "badge of their suffering."

The Aug. 17, 1945, front-page headline read, "Moral aspects, atomic power reviewed." The article stated that the Church had not determined its final judgment on the morality of the use of atomic energy.

New community of nuns, refugees from Europe, installed at Winslow

To save itself, democracy must be Christian

Bishop to preside at auxiliary's jubilee

Many Catholics in cast of 'The Bells of St. Mary's'

Not all Germans guilty

Excitement at Guardian as staff prepared to move to new quarters

"Going My Way" with Bing Crosby, presented by Paramount Pictures

Today, with the eyes of the world upon us, the fourth war loan is launched. Let's all back the attack.