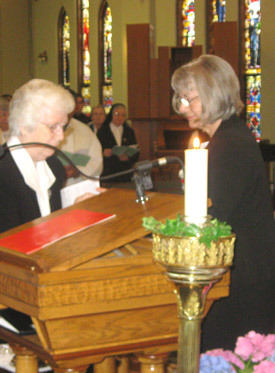 FORT SMITH -- A mother of six, grandmother of eight and great-grandmother of one made her perpetual profession before Bishop Anthony B. Taylor June 24.

Sister Alice O'Brien took the final step in her discernment during a Mass concelebrated by Father David McKillin, OSB, and Father John Schmitz. She joins a long list of women who, after raising large families, entered religious life. St. Frances of Rome, St. Jane Frances DeChantal, St. Bridget of Sweden and St. Elizabeth Ann Seton are among those who embraced religious life after their marriages ended and their children were grown.

"My monastic journey probably began many years ago when I was in the eighth grade at St. Joseph Catholic School in Amarillo, Texas," Sister Alice said. "However my journey continued as I finished high school, met my husband, got married and became the mother of six children. When my marriage broke up and I was single for some years, I felt that call from God once more and began to discern a vocation to religious life."

Her sister, Sister Rose Maria, who was the prioress of Our Lady of Peace Monastery when Sister Alice became a postulant, was helpful and supportive during her period of discernment. During her temporary profession, Sister Alice left the dwindling community of seven at Our Lady of Peace Monastery to go to St. Scholastica, leaving friends and sisters there, she faced a period of adjustment.

Looking back, she said, "I know with all my heart that this Benedictine life is for me, that God has called me to St. Scholastica. I truly love this life and this community has shown me the love of God daily."

Sister Alice brings many years of life experience and needed skills to the St. Scholastica community. She is a registered nurse and is currently working on her bachelor's degree in theology through the Little Rock Theology Institute. She works in the infirmary and in spiritual direction and has helped vocations director Sister Kimberly Prohaska, OSB. Because she earned her cosmetology license as a young mother, she even helps style sisters' hair as needed.

Her four sons and two daughters, several grandchildren and one great-grandchild traveled from Indiana, Michigan, Texas and Arizona to celebrate her profession.

"At the onset some of my family did not understand my decision, but I believe they have come to understand my vocation better as they see how important it is to me," Sister Alice said.

"The main thing I would tell any woman who might be thinking about the monastic life is to 'Pray to God every day to know what he is saying' and to 'Listen, really listen to that call in the many ways that it may come to you,'" she said.

"God has rewarded me with so many blessings and graces in my life," Sister Alice said, "but I believe that God's call to this Benedictine monastic life is a gracious call and God has given me the graces I need to follow it."