First Arkansan installed as bishop, a testament to diocesan growth

Time Capsule 1947-1949A 33-part series on history mined from the first 100 years of Arkansas Catholic and its predecessors. 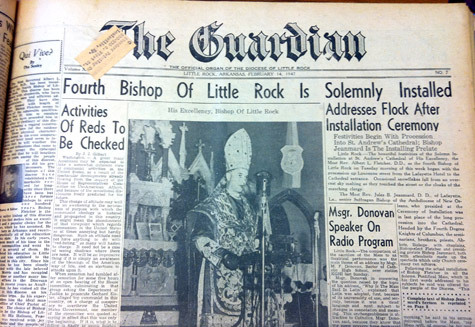 The Feb. 14, 1947, issue of The Guardian reports on the installation of Bishop Albert L. Fletcher as the fourth bishop of Little Rock. The Arkansas native was ordained a bishop in 1940.

The Feb. 14, 1947, issue of The Guardian reports on the installation of Bishop Albert L. Fletcher as the fourth bishop of Little Rock. The Arkansas native was ordained a bishop in 1940.

Bishop Albert Louis Fletcher was installed as the bishop of Little Rock on Feb. 11, 1947, four months following the death of longtime bishop John B. Morris.

While Bishop Fletcher was ordained to the episcopacy and installed as an auxiliary bishop in 1940, it wasn't until the formal ceremony in 1947 that the diocese officially had its fourth bishop.

The Pontifical Ceremony of Installation before 40 archbishops and bishops was held at the Cathedral of St. Andrew in Little Rock. Bishop Jules B. Jeanmard of Lafayette, La., installed Bishop Fletcher, who wore the episcopal ring of the first diocese's bishop, Andrew Byrne, and the cross from the second bishop, Edward Fitzgerald, and carried Bishop Morris' crozier. The Mass was broadcast on radio station KXLR.

A banquet for the bishops and clergy followed in the Hotel Marion and civic reception was held at the Joseph T. Robinson Memorial Auditorium in the evening.

Speaking to the lay people in his homily, Bishop Fletcher said, "There will be plenty of work for you to do. ... Where there is Catholic life, there must be work and sacrifice."

The Little Rock native was educated at Catholic schools in Paris and Tontitown. He received his high school education at Little Rock College. He never served as an assistant pastor or pastor, dedicating his 25-year career before becoming a bishop to teaching. He was called a "born professor."

"He has always occupied a place preeminent among us," Msgr. James P. Gaffney of El Dorado said of the new bishop. "Nor could we think of another better fitted to lead us."

"It attests to the fact that the seeds of Catholicism have been firmly implanted on Arkansas soil and that the faith is here to stay," a seminarian wrote.

With the Feb. 11, 1949, issue and two years after becoming the bishop, Bishop Fletcher began writing a weekly column for The Guardian. The "Around the Diocese" column detailed many of the good works that the bishop saw each week during his travels to the parishes and schools.

A young priest who started getting attention in the pages of The Guardian was Father Lawrence P. Graves. In the Jan. 23, 1948, issue it was reported he was named the vice chancellor for the diocese. The Texarkana native studied at St. John Seminary and the American College in Rome. He returned to Arkansas when the war started and was ordained in 1942. In 1945 he went to Catholic University in Washington for canon law studies. (Father Graves was ordained an auxiliary bishop for the Diocese of Little Rock in 1969 and bishop of Alexandria, La., in 1973. He died in 1982).

Even with the end of the war, struggles continued in Europe. It pitted East and West, communism against capitalism and Christ and anti-Christ. The Church was restricted in Russia, Poland, Hungary, Czechoslovakia and Rumania. In Poland "hidden persecutions" were increasing. Freedom of religion was no longer possible in Russia. Dilapidated churches were turned into museums, theaters and even barns. Baptisms were outlawed. The few churches that were operated in the bigger cities were watched by police.

In 1949 it was reported that "hundreds of thousands" of German women, including nuns, were detained in Russia as slave laborers. In Yugoslavia at least 200 Catholic priests were imprisoned by the secret police. No private religious schools or charities existed. When schools were nationalized in Hungary, the sisters were expelled.

Feb. 6, 1949, was declared to be "Cardinal Mindszenty Day" in the diocese by Bishop Fletcher. The Hungarian cardinal was arrested and sentenced for treason and conspiracy for opposing communism and persecution in his country. He was tortured while serving life in prison.

In Arkansas, 100 people from the European Displaced Persons Camps were resettled. The people came from Germany, Poland, Austria and Italy. The priest organizer of the resettlement committee asked parishes to agree to sponsor one or more families.

"Remember 55 perccent of DPs are Catholic," he said in a July 30, 1948, issue. In the Nov. 5, 1948, issue, the stories of two large Polish families destined for St. Michael Parish in West Memphis were detailed. The families were "dispossessed of home, land and occupation by the Nazis" in 1943.

Wheat piles up in Syria as thousands starve in Europe

Throwing rice at a wedding a sinful waste

Pledge of Legion of Decency to be renewed

Catholics asked to have religion noted in census