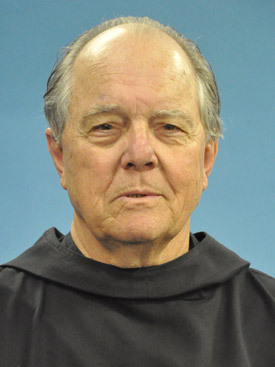 SUBIACO -- Father Eugene Luke, OSB, pastor of St. Joseph Church in Paris, celebrated his golden jubilee of ordination to the priesthood during the annual monastic retreat at Subiaco Abbey in early June.

He was born Oct. 6, 1936, in Muenster, Texas, and attended Sacred Heart School in his hometown followed by two years at Muenster High School. He came to Subiaco Academy for his final two years of high school, graduating with the class of 1954. He entered Subiaco Abbey, professing his vows as a Benedictine monk on Sept. 8, 1956, receiving the name Eugene. He was ordained to the priesthood by Bishop Albert L. Fletcher at Subiaco Abbey on July 11, 1961.

Father Luke served on the faculty of Subiaco Academy as a teacher of religion, Latin and Spanish. With the advent of the Second Vatican Council, he was an active participant in charismatic prayer groups among students and adults. He attended state and national workshops and was a highly respected director of healing/reconciliation retreats.

In Arkansas he assisted with retreat work at St. Scholastica Monastery in Fort Smith and served as a weekend chaplain at Arkansas Tech University in Russellville. At Subiaco he served as Coury House retreat master from 1976-77.

It is impossible to enumerate all the artistic masterpieces created by Father Luke. Through the years he turned hours of manual labor into a hobby which flowered into a medium of art. In the 1980s he was commissioned to make a crozier for Bishop Andrew J. McDonald. Several parishes commissioned him to design liturgical church furnishings, such as candelabra and coronas.