Time Capsule 1953-1955:A 33-part series on history mined from the first 100 years of Arkansas Catholic and its predecessors. 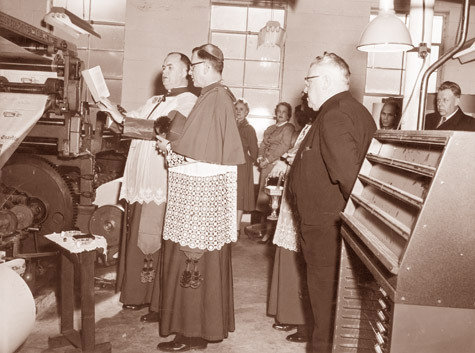 The Guardian began to take on a more modern feel in the 1950s. Many news photos filled the pages as well as columns by well-known figures like Msgr. Fulton J. Sheen.

In 1953 Bishop Albert L. Fletcher instituted a plan to print and mail 10,000 copies of The Guardian, reaching every home, meaning 4,000 to 5,000 extra homes would receive the paper each week.

In 1953 The Guardian's bookstore was featured prominently in the newspaper each week, with ads publicizing new books and religious items and photos of staff and new expansions at the store.

Beginning in 1954 news articles often implored the readers to support the advertisers, which were critical to continuing the weekly publication. Editor Msgr. Thomas L. Keany clearly displayed his disappointment in the "pitiful" number of ads in the paper and asked Catholic businesses owners to advertise in The Guardian.

"No paper can operate without its advertisers," one 1954 article stated. "They are the life blood of publication. You, as the actual owners of The Guardian, will be asked to lend your cooperation in the forth-coming drive to 'break the barrier,' which separates The Guardian from its full complement of potential advertisers."

In 1954 The Guardian was the "largest full-sized weekly newspaper in Arkansas."

"Its influence upon the Catholic people cannot be duplicated by any other means of communication," according to an article.

In the Aug. 13, 1954, issue it was reported that Msgr. Thomas J. Prendergast, the longtime managing editor and business manager, was named the executive editor. William W. O'Donnell joined the staff as manager editor. The Cranston, R.I., native previously worked in Boston and Providence. Msgr. Thomas L. Keany, the editor for the past 18 years, continued in his role as well as columnist of "Que Vive."

On Jan. 29, 1955, Bishop Fletcher blessed the new Twin Goss Press Unit on the feast of St. Francis de Sales, the patron of journalists. The contrast between his vestments and the rugged machinery was noted. Up until then, The Guardian could only print eight pages for each issue. The new press allowed the staff to publish up to 16 pages a week.

O'Donnell began to make a name for himself by hosting a weekly Catholic news radio broadcast every Saturday on KTHS. He emphasized stories not usually mentioned in secular news programs.

O'Donnell wrote the laudatory front-page article in December 1954 about the opening of the new St. Vincent Infirmary in Little Rock. Under the headline, "New St. Vincent's begins its service to humanity," the article described the dedication ceremonies.

"Sixty-six years from now, when the New St. Vincent's Infirmary is growing venerable with age and showing the signs of wear, few will remember the four days of its dedication," the article stated.

The previous hospital was built in 1888, 66 years before, by the Sisters of Charity of Nazareth. About 1,200 people turned out for Bishop Fletcher's dedication. An accompanying photo showed the 10 nuns who were assigned to offices on the first floor. For four days people toured the $6-million facility located on Markham and Hayes streets.

In 1955 Msgr. Francis A. Allen, pastor of Our Lady of the Holy Souls Church in Little Rock, donated 225 leather-bound Bibles for the patients' rooms.

The paving of Hayes Street (now called University Avenue) was big news in 1955. The mile-and-a-quarter stretch between Cantrell Road and Markham Street, where the hospital was located, was described in detail. The road "has long been noted for its dangerous, protruding boulders and awesome chuckholes."

One piece of property owned by the diocese also would be affected once the road was paved. The article noted the land would probably be the site for "Little Rock's future high school."

1953 brought fewer restrictions for Catholics going to Mass. A "history-making" apostolic constitution was issued by Pope Pius XII that said Masses could now be celebrated in the evening, and the eucharistic fast was eased. The sick could now take their medications without breaking their fast. Priests and laypeople could drink water and other non-alcoholic drinks up to one hour before Communion. Food could not be taken less than three hours before Communion. Evening Masses would be allowed only with permission of the bishop on special occasions.

These changes were necessary now in the modern culture. It was difficult for night-shift workers, mothers with children and school children to get to morning Mass.

"It must be remembered that the mitigation of the law of the eucharistic fast is not given to make Catholics less reverent in their attitude toward the Holy Eucharist. The purpose is to encourage the faithful to approach the Holy Table more frequently," according to Father Francis J. Connell, CSSR.

Travelers' Field was scheduled to once again be the scene of a Catholic service. A holy hour was held in October 1954 as a Marian Year tribute but was moved to Robinson Auditorium because of rain.

About 5,000 Catholics packed into the auditorium and streets with Bishop Maurice Schexnayder, auxiliary bishop of Lafayette, La., as the preacher.

St. Vincent de Paul, Rogers, sees trend toward the faith in the 'heart of the Ozarks'

Czechoslovak Church no longer clubbed over head, instead is fed secret doses of poison

Extolled as 'the saint of our time,' Pope Pius is raised to the honors of the altar; by television the whole world will see how a modern pope become Church's newest saint

1st, 2nd graders to get polio serum in Arkansas

Imminent marriage is held only justification for steady dating

"Grapey," the graper invites you to the 55th annual Tontitown Grape Festival