Time Capsule 1956-1958A 33-part series on history mined from the first 100 years of Arkansas Catholic and its predecessors. 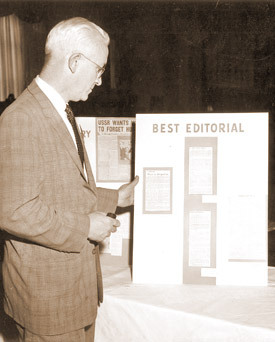 Arkansas Catholic archives
In this May 1958 photo, managing editor William O'Donnell looks at his editorial on the 1957 Central High crisis that won a "best editorial" award for The Guardian from the national Catholic Press Association.

Arkansas Catholic archives
In this May 1958 photo, managing editor William O'Donnell looks at his editorial on the 1957 Central High crisis that won a "best editorial" award for The Guardian from the national Catholic Press Association.

Articles on school issues became more prominent in The Guardian in 1956 to 1958. Catholic schools continued to enjoy a sizeable growth.

Responding to possible federal action, Bishop Albert L. Fletcher said in a Jan. 27, 1956, article that Catholic schools should never accept federal funds. This sentiment was echoed by other bishops in the March 23, 1956, issue.

By fall 1957, Catholic school enrollment in Arkansas was expected to increase to 10,000 students, which was a 5-percent increase over the previous year. Half of the students lived in the Little Rock area and Fort Smith.

Writing about the 1954 U.S. Supreme Court decision that "separate but equal" education is not constitutional,_editor Msgr. Thomas L. Keany wrote in September 1957 about the need for more single-gender_schools to possibly calm Southerners' fears of the races mixing and possibly inter-marrying.

"Co-education is not permitted_in_Catholic schools if it is at all possible to provide separate schools for the sexes," Msgr. Keany wrote.

As the 1957 Central High crisis was taking place in Little Rock, The Guardian rarely mentioned the events.

In a front-page editorial in the Sept. 20, 1957, issue, The Guardian blamed the local secular press for printing "scare headlines" that led to the "difficulties."

"There would have been no apparent cause for action by the state's chief executive and peaceful integration could have been the order of the day."

The editor wrote that the front-page headlines in other papers implied there would be trouble.

"Integration is the law, and it is wrong to interfere with its peaceful inauguration," the editorial stated.

In the Oct. 4, 1957, issue, a story detailed the editorial views from other Catholic newspapers, with all of them in favor of President Dwight D. Eisenhower ordering federal troops into Little Rock.

"The awful and scandalous situation, stirred up by the movement of troops and inflammatory news reports, has created a most degrading atmosphere for the youngsters, white and Negro, at Central High," a Guardian editorial stated.

According to an Oct. 18, 1957, story, hundreds of Catholics at 12 churches, accompanied by military, attended special services to pray for a peaceful solution to the "integration difficulties." Members of the 101st Airborne Division, which enforced integration at Central High, attended the service at the Cathedral of St. Andrew. At the same time, Protestant and Jewish congregations were also holding prayer services.

The first sentence of the obituary for Pope Pius XII read, "The 263rd Vicar of Christ on earth is dead." The pope, who lead the world's 500 million Catholics for 20 years, was "stricken with two cerebral attacks" in October 1957. Bishop Fletcher issued a statement following the death, saying, "Pope Pius XII was a powerful friend of all mankind."

Cardinal Angelo Roncalli, the 76-year-old patriarch of Venice, was elected the next pope. Pope John XXIII was chosen on the 11th ballot cast during the secret conclave. His coronation took place in November 1957 at St. Peter's Basilica before 25,000 people.

Bishop Fletcher pleaded with Catholics during the annual Bishop's Dinner in Little Rock in 1957 that the diocese needed more seminarians.

"Without hesitation I can say we could place 25 additional priests in the Diocese of Little Rock. ... We would use 10 new priests a year," the bishop said in January 1957.

The diocese, in fact, was having a "lean year" with no priests being ordained for the diocese from St. John Home Missions Seminary.

Over the past 20 years, the diocese had never been without at least one new priest each year, rector Msgr. James E. O'Connell said.

"In the past decade, the numbers of priests, brothers and sisters in this country, Alaska and Hawaiian Islands has increased less than half as fast as the number of Catholics they must serve," a June 1958 article reported.

Growth in the diocese

The diocese was continuing to grow in its number of parishes, schools and homes for religious sisters. The bishop said in 1955 that over the past decades the diocese spent $5 million on building construction.

Following the lead established by Bishop John B. Morris, Bishop Fletcher said the diocese should not become "property poor."

"We cannot wait for sections to develop" before purchasing land for expansion, because prices meantime would rise substantially, he said.

Start today enjoying all the advantages of Safeway's self-service meats