Time Capsule 1959-1961A 33-part series on history mined from the first 100 years of Arkansas Catholic and its predecessors. 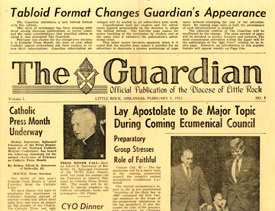 In 1961, The Guardian changed from the broadsheet size of its first 50 years to a more-compact tabloid format with twice as many pages.

In 1961, The Guardian changed from the broadsheet size of its first 50 years to a more-compact tabloid format with twice as many pages.

Following the 1957 crisis at Central High School in Little Rock, race relations continued to be a topic of articles and editorials in The Guardian.

At midnight Mass on Christmas in 1958 at the Cathedral of St. Andrew, Bishop Albert L. Fletcher said the race relations issue lies "in our own souls."

Discussing peace around the world, he said, "We do not have to go to other parts of the world to find this lack of peace this Christmas. We are not at peace at home -- here in Little Rock, race hatred threatens our peace."

Speaking to the segregationists and integrationists in the congregation, he said everyone shares a common ground.

"That common ground, that foundation of peace, are the Commandments of God. They are the laws of justice and charity -- the same virtues Christ practiced by becoming man. He satisfied the justice of God and proved his love for men," he said in his homily, published in the Jan. 2, 1959, issue.

"Every man on earth, my friends, is our neighbor," he said.

In 1959, The Guardian's managing editor William W. O'Donnell wrote an analysis of race relations, which was originally written as a series of six front-page editorials and later published as a booklet titled "America's Race Problem." He suggested five civic efforts to address the problem, including creating "a personal pride among Negroes, commensurate with that which exists among Caucasians" and creating "a general yearning among Negroes for education."

Repeating a suggestion made earlier in The Guardian, O'Donnell said schools should no longer be co-ed to reduce the fears of "intermingling."

The editorials brought much attention to the newspaper, often negative.

"Maligned, misrepresented, misquoted and criticized, The Guardian is better known than ever before in its 48-year history, but the Little Rock diocesan weekly is in a happy position of being able to defend itself," according to a Oct. 30, 1959, article.

In Feb. 26, 1960 O'Donnell began writing "An Answer to Critics," repeating that the analysis included only practical solutions to taking the first steps toward race relations.

For other Catholic editors, he said "the only safe position seems to be to advocate immediate total integration of the races without regard for the consequences. … What The Guardian said in its 'analysis' needed to be said. Catholic idealists needed to be brought down from the clouds."

In September 1959 when the Little Rock School Department headquarters were bombed, the blast damaged the Discalced Carmelite Monastery downtown. Splintered glass showered down on the sisters who were sleeping, but no one was injured. Two weeks earlier, two "noxious bombs" intended for the school committee headquarters sent fumes into the convent.

During Lent 1960 Bishop Fletcher wrote booklet called "An Elementary Catholic Catechism on the Morality of Segregation and Racial Discrimination" for use in Confraternity of Christian Doctrine discussion clubs. It was later published in The Guardian.

The Church also began to address its lack of black priests.

"It is gratifying to realize that in the United States, which had only seven Negro priests 20 years ago, there are now 112. There should be many more, but this increase shows the proper trend," Archbishop Egidio Vagnozzi, the pope's delegate to the United States, said in May 1961.

Changing of the Guardian

For The Guardian's 50th anniversary, major changes were introduced in the diocesan newspaper. For the first 50 years, the newspaper was broadsheet like most daily newspapers. Then in February 1961 the newspaper was reduced from its 17-by-22 inch page size to a tabloid size. The decision was made because other diocesan newspapers were adopting the smaller format and it was more appealing to advertisers. Instead of each issue being eight pages, it doubled to 16 pages. The editor's column, "Qui Vive?" was moved inside after 25 years as a mainstay on the front page.

The 50th anniversary edition on Feb. 24, 1961, included a letter from the Vatican's apostolic delegate in the U.S., conveying Pope John XXIII's apostolic benediction on the newspaper. The issue also contained a prominent photo of the newspaper's current publisher, Bishop Fletcher, and a history of the paper.

"It is for us, in this golden jubilee year, to rededicate ourselves to the cause of the Catholic press in our diocese. It is a great apostolate. It is becoming more important with the passing of years," Bishop Fletcher wrote in the anniversary issue.

'Don't sit and fret,' bishop counsels. 'Do something' about vocations