Prior of Subiaco Abbey, he has felt Benedictine influences all his life 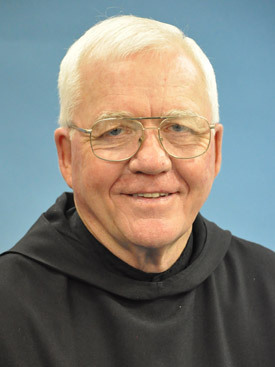 Father David Bellinghausen, OSB, became a monk of Subiaco Abbey in 1961 and was ordained a priest there in 1986.

Father David Bellinghausen, OSB, became a monk of Subiaco Abbey in 1961 and was ordained a priest there in 1986.

The call from God was one Father David Bellinghausen, OSB, could not ignore, joining the Benedictine order at Subiaco Abbey after his first year of college.

Father Bellinghausen celebrated 25 years as a priest during the annual monastic retreat at Subiaco Abbey June 6-10, and 50 years as a monk.

"I love the solitude of monastic life, but I also enjoy being with people," he said. "I have enjoyed exercising the priestly office within my monastic vocation."

He was born Aug. 31, 1939, in the rural community of Rhineland, Texas, the ninth of 10 children. His elementary education was under the Olivetan Benedictine sisters at St. Joseph School, followed by four years of secondary education at Rhineland High School where he graduated as valedictorian of the class of 1957.

The Benedictine influence of the parish priests and during school made an impression on him. It was something he tried to ignore, as he went on to high school and then college.

"I tried to resist as much as possible in high school. In college, I decided Subiaco was the place for me," he said.

He attended one year of college at North Texas State University in Denton, Texas, before coming to Subiaco Abbey as a candidate on Jan. 17, 1960. He professed his vows as a monk of Subiaco Abbey on Aug. 15, 1961.

For nearly two decades, he worked primarily as a linotype operator, printer and manager of the abbey's print shop until its closure in 1981.

In addition, he was for a time a religious education instructor at nearby Scranton and assisted on Search, Marriage Encounter and in various retreat activities.

After years as a monk, he felt God was calling him again -- this time to study for the priesthood. It had been 30 years when he went back to school.

He began his studies for the priesthood at St. Joseph Seminary College in St. Benedict, La., and Notre Dame Seminary in New Orleans. He entered the Pontifical College Beda in Rome for his theological studies, while living at Collegio Sant' Anselmo, the international Benedictine center in Rome.

While in Rome, he served as deacon in the Ash Wednesday Mass in 1986 with Pope John Paul II at Santa Sabina Basilica. Traditionally, two deacons, one Benedictine and one Dominican, assist the pope there.

"I stood at the altar and raised the chalice while he raised the host," he said. "It was a very memorable moment. When he becomes a saint, I can tell people that I stood next to him and he put ashes on my forehead."

On the solemnity of All Saints, Nov. 1, 1986, Father Bellinghausen was ordained to the priesthood at Subiaco Abbey by Bishop Andrew J. McDonald.

"What attracted me to my monastic vocation the most was public and private prayer as a way of seeking God…to help others deepen their prayer life, so they can seek God is the most important aspect of my priestly life," he said. "To help others find that awareness of God is fulfilling."

For the next two years he was on the faculty of Subiaco Academy. In 1989 he became pastor of Holy Redeemer Church in Clarksville and its mission of Sacred Heart Church in Hartman.

He went to Texas in 1994 as pastor of Sacred Heart Church in Muenster, which at that time was the largest parish staffed by the Benedictines of Subiaco Abbey.

Father Bellinghausen returned to Subiaco Abbey where he was appointed prior of the monastery by Abbot Jerome Kodell on July 15, 1997, a position he presently holds. As prior he assigns substitutes to help in the parishes and is still able to occasionally work in a parish when it is his time to serve. He also provides spiritual direction and private retreats.

On some days, he divides his time between the farm and the abbey. Father Bellinghausen works with the abbey's Black Angus cattle, keeping up-to-date with the technical data on each animal in the 300-head herd.

"It's a great outlet whenever dealing with other duties gets overwhelming and I can go spend some time outdoors. It lets me get out of the office sometimes," he said. "And I enjoy the details of the genetics."

Three of his cousins were Benedictine sisters at St. Scholastica Monastery in Fort Smith. As he learned more about his family history, the Benedictine tradition was a constant.

"Being Benedictine is in my DNA. As I study things in my family tree, I've come to realize that. My ancestors in Germany were Benedictines. I was raised in a parish where we had Benedictine pastors and was taught by Benedictine sisters from Holy Angels," he said. "All of this was meant to be, and a part of who I am."