House of Formation to open in Little Rock in spring 2012 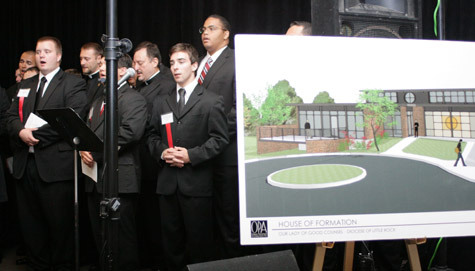 Malea Hargett
An architectural drawing of the House of Formation that will open in Little Rock next year was previewed at the A Taste of Faith dinner Aug. 6 in Little Rock. Seminarians sing in the background.

Malea Hargett
An architectural drawing of the House of Formation that will open in Little Rock next year was previewed at the A Taste of Faith dinner Aug. 6 in Little Rock. Seminarians sing in the background.

The former convent at Our Lady of Good Counsel Church in Little Rock will once again be a place to support religious vocations.

In August, Bishop Anthony B. Taylor announced that the Diocese of Little Rock will be establishing the House of Formation for certain seminarians and discerners at the Sisters of Mercy convent, which was used for religious education classes and parish offices until 2009.

The diocese opened a discernment house in a rented house in Little Rock in 2009 as a place for those discerning a call to the priesthood, but current seminarians who were in town often stayed there. The seminarians and discerners are living temporarily in Fletcher Hall at St. John Center in Little Rock until the House of Formation is opened.

It is estimated to cost $1.2 million to renovate and furnish the building, but it is hopeful the costs can be reduced by at least $200,000 with some changes to the current architectural plan, Msgr. Friend said.

The house is scheduled to open around Easter next year. Among the first to move in will be three seminarians -- Thomas Johnson, Ehldane Labitad and Karldy Isidor -- and two discerners, Jose Luis Quijada and Emmanuel Torres. In the summer, those who have pastoral assignments in the Little Rock area will also move in.

Msgr. Friend said the House of Formation is now more structured like a seminary. The men rise at 6:15 a.m. for morning prayer and Mass. In the evening they attend evening prayer and holy hour together. During the day they attend academic or English as a Second Language classes at the University of Arkansas at Little Rock, which is one mile from the new house.

Once a week Msgr. Richard Oswald, prefect of the House of Formation, will organize a "formation night" on various aspects of seminarian and priestly life, such as diocesan history, time management and nutrition. As time permits, the men will assist with religious education, liturgies and youth ministry at Good Counsel or another local parish.

Msgr. Friend said Msgr. Oswald is the perfect priest to oversee the day-to-day operations of the House of Formation because he is a native Arkansan and graduate from St. John Seminary, which closed in 1967.

"He is able to talk to the guys about what the different priests did and about the seminary when we had it," Msgr. Friend said. "He has a wealth of pastoral experience from his time as a priest. He is just a wonderful priest. ... It is a testimony to them about what it is to be a priest in the Diocese of Little Rock. Part of that is learning the lore of the presbyterate. When we had a seminary here, that got passed on because it was our seminary. We have lost some of that."

Msgr. Friend said the House of Formation will have a constant presence in the lives of Catholics in the area, especially at Good Counsel. Instead of being photographs on a vocations poster, the men will be present at parish and diocesan events. He said this will help continue to foster the "culture of vocations" he has been trying to build in the diocese for the past six years.

"It's real exciting. This is where people know that the seminarians are based," he said.

Donations for the project can be mailed to Diocese of Little Rock House of Formation, P.O. Box 7565, Little Rock, AR 72217. Individuals, groups or families can sponsor specific rooms in the house in honor or memory of a loved one.