Ten new seminarians accepted for the Diocese of Little Rock 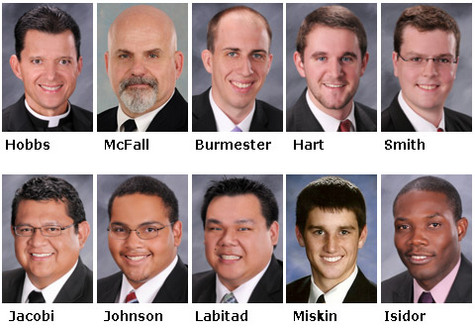 Ten seminarians have been accepted by the Diocese of Little Rock to begin studying for the priesthood.

The diocese will have 34 seminarians, an increase of three from last fall. In 2012, four -- and possibly five -- men will be ordained priests.

In addition to the United States, the men come from seven countries: Mexico, the Dominican Republic, the Philippines, Haiti, Colombia, El Salvador and Guatemala.

Five of the men would be considered nontraditional students, having previous careers and even families before discerning a call to the priesthood. This fall Charles "Rick" Hobbs III, 48, a former diocesan seminarian, and Norman McFall, 54, a former Freewill Baptist pastor who converted to Catholicism and was studying to become a deacon, were accepted as seminarians.

Msgr. Scott Friend, vocations director, said he would not consider it a trend in the Diocese of Little Rock to be accepting older seminarians. But nationally the average age of newly ordained priests is increasing. According to the Center for Applied Research in the Apostolate at Georgetown University, the average age of a new priest in the U.S. in 2010 was 37, but 11 of them were 65 years older or older.

"I really look at each person," he said. "Each one of them is very unique. It's all part of the discernment process."

The other new seminarians are:

The seminarians who will be ordained in 2012 are:

Manjarrez, Puello and Carrasco, who attend St. Meinrad Seminary, will be ordained priests May 26 at Christ the King Church in Little Rock.

Other returning seminarians and their seminaries are:

Two men are "discerners" and will live at the Formation House at St. John Center in Little Rock this year. They are: