Time Capsule 1962-1964A 33-part series on history mined from the first 100 years of Arkansas Catholic and its predecessors. 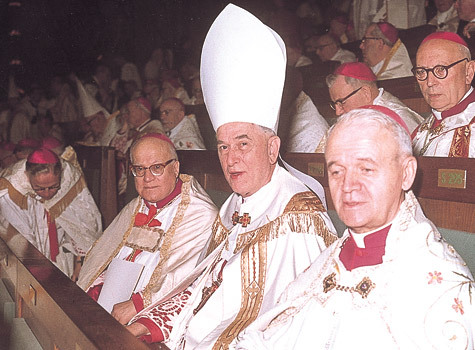 Arkansas Catholic file
Bishop Albert L. Fletcher (second from right) made four trips to the Vatican from 1962 to 1965 during the Second Vatican Council sessions.

Arkansas Catholic file
Bishop Albert L. Fletcher (second from right) made four trips to the Vatican from 1962 to 1965 during the Second Vatican Council sessions.

The Second Vatican Council captivated top coverage before it convened in 1962 and throughout the three sessions held during 1962-64.

Leading up to the council, The Guardian ran a 12-part series discussing issues facing the council -- excerpts from the book, "The Ecumenical Council: Church and Christendom," by German Archbishop Lorenz Jaegar. The series looked at topics the council would cover, including papal infallibility, unity of the Church, assistance of the Holy Spirit, Protestants and the Christian message and the catholicity of the Church.

The work of Arkansas clergy was becoming increasingly global. In early 1962, a headline read, "Editor tells nation of Catholicism in Arkansas." While a guest of the National Council of Catholic Men on the American Broadcasting Company, managing editor William W. O'Donnell reported that Arkansas had 45,000 Catholics, 74 parishes, 36 missions, 54 elementary schools, 11 high schools and more than 10,000 students.

During this time, New Subiaco Abbey began a mission in Nigeria and sent four Benedictines, including native Arkansans Fathers Raphael De Salvo and Basil Wiederkehr. "'Church in Port Harcourt' is flourishing, Arkansas monk reports from Africa," stated a headline in the Nov. 1, 1963 issue.

Sister Marita Ann Nabholz, SCN, of Conway, traveled to India March 3 to train nurses and work with lepers in a remote hospital. Sister M. Emile Nabholz, SSND, and her cousin Sister Mary John Lachowsky, both from Conway, worked in missions in Japan. Father Joseph Lauro worked among the poor in Ecuador, after volunteering to work in South America.

Pope John XXIII opened the Second Vatican Council in 1962. His goals were to promote peace and Christian unity. The historic council and its ecumenical stance were fascinating to the world. People from other Christian faiths observed the council, and with each session the breadth of observers was increased to include non-Christians and women.

Bishop Fletcher left Arkansas by train for opening of the council and later boarded the S.S. Constitution for the voyage to Italy.

During the three council sessions during 1962-1964, he wrote a weekly letter to Arkansas Catholics published in The Guardian where he recounted his thoughts, experiences and travels around Rome.

"It was an unusual sight. There must have been a thousand prelates in that one long hall about a block long and 75-feet wide. They were of all colors and races, spoke almost every language under the sun and although they all wore a white miter and a cape, they were as varied as the rainbow," Bishop Fletcher wrote of the council opening on Nov. 2, 1962.

While at the council, he was named to the "faith, morals panel by American hierarchy."

His return from the first session by plane drew crowds to Adams Field in Little Rock, according to the Dec. 14, 1962, issue. Bishop Fletcher greeted the reported 100 guests and held a press conference where he talked with the news media.

During the nine-month council recess, The Guardian reported on May 17, 1963, that Pope John XXIII "looks pale and appears to have lost weight," which was revealed later as effects of stomach cancer. Pope John XXIII foreshadowed his own death when on May 31, 1963, he said he hoped prayers if he were to die would bless the council and world peace. In the June 7, 1963, issue, the "World mourns as remains of Pope John XXIII are interred; postponement of council foreseen."

His successor, Pope Paul VI, was elected June 21, 1963, and the council was not over. The Guardian reported on June 28, 1963, that "World awaiting drama of Paul VI coronation; council recall, continued peace effort promised."

Arkansas saw the first council-approve changes in the use of "vernacular" in the sacraments when the paper reported on Sept. 18, 1964, that the "Diocese starts using vernacular in sacraments." A photo in the Oct. 9, 1964, issue, hailed "Convention Mass facing people," where the celebrant faced the congregation for Mass during the Little Rock Diocesan Council of Catholic Women at Holy Redeemer Church in El Dorado.

Peace among all men

The civil rights movement was also a popular topic in the paper. Both the pope and American bishops emphasized that all people are God's people and deserve equal justice.

"We have to have (racial) integration, but at the same time, we must maintain and improve the standards of our society," Father David Boileau, who taught at St. John Seminary, told the Our Lady of the Holy Souls Men's Club in Little Rock, The Guardian reported March 30, 1962.

Bishop Fletcher "urges full compliance with rights law," he told Arkansas Catholics in the July 16, 1964, issue. "But the path is clear although it is going to be rocky in places. Let us not allow these difficulties to discourage us. Let us look on the Civil Rights Act as an effort to require all of us as citizens to give every man at least that which he can expect of us as his brother in Christ," he said.

Bishop dedicates church built on a prairie amid the fertile rice fields - S.S. Cyril and Methodius in Slovactown

Castro automatically excommunicated for impeding work of bishops and priests

Vietnamese Catholics persecuted: made to renounce their faith, take down crucifixes and religious articles

Pope to meet Orthodox Patriarch Athenagoras in Holy Land; talk will be first in five centuries

35,000 Pakistani Christians flee to India from Moslem persecution in their homeland