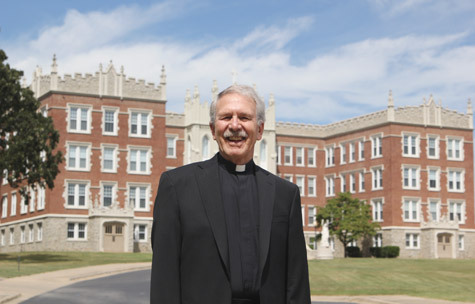 Phyllis Hemann
Father John Oswald stands on the oval outside his home at St. John Manor on the campus of St. John Center in Little Rock. The first time he lived on campus was while attending seminary until he was ordained in May 1961.

Phyllis Hemann
Father John Oswald stands on the oval outside his home at St. John Manor on the campus of St. John Center in Little Rock. The first time he lived on campus was while attending seminary until he was ordained in May 1961.

Father John Oswald began his life as a priest at St. John Center in Little Rock, living and studying at St. John Home Missions Seminary, and it is where he returned after a stroke around 1996.

"It's very different than when I lived here before. I lived in the old prep side in the seminary. I live in the chapel now," he said laughing. "Well, I live where the chapel was back then. I like it."

He grew up the oldest with six brothers and one sister at Our Lady of Good Counsel Church in Little Rock. His family was active in the parish where he was an altar boy.

He went to Catholic High School and entered seminary after graduation.

"I can't give a good enough answer as to why I became a priest," he said. "I had good influences in my life. I just went along."

Only two teachers at Catholic High were lay people when he studied there. The rest, Father Oswald said, were priests.

"They encouraged me about my life and what it was like to be a priest. Father Doyle encouraged me," he said. "I said to go ahead and went to seminary."

Being a priest runs in the family, as Father Oswald had an uncle who was a priest. His younger brother, Msgr. Richard Oswald, is also a priest in the Diocese of Little Rock.

"I know I was at (my brother's) ordination. I don't remember what I did, but I was there. I was a priest for four years when my brother was ordained."

Father Oswald was ordained on May 27, 1961, along with his friend Father Joseph Pallo. He celebrated his first Mass at Good Counsel. On Aug. 8, 1961, he joined the faculty at Catholic High School.

Father Oswald found joy in teaching math to the boys at Catholic High and has found it was in God's plan even though he never aspired to be a teacher.

"It was special. I didn't plan on teaching, but it happened," he said.

The principal at Catholic High asked him to come to the school and be a teacher there.

"I did well, so I stayed. I like teaching. I learned all about math, which is something I never learned before," he said.

While teaching, he also worked with parishioners at St. Mary Church and Immaculate Conception Church in North Little Rock, and the Cathedral of St. Andrew and Christ the King in Little Rock.

He took a leave of absence from the diocese at the end of the school year in August 1981. He went to teach mathematics and computers with the Department of Defense. He was living in Austin, Texas, when God called him again.

He suffered a massive stroke there around 15 years ago that changed the course of his life. He returned to Arkansas to live at St. John Manor, the diocesan home for retired priests.

On any given day, Father Oswald walks the oval at St. John Center. It keeps him active and helps strengthen his legs. His gait and speech changed from the stroke, but he said he "keeps going."

Despite the challenges, Father Oswald still keeps his sense of humor -- handling problems that pose hurdles for him with a laugh and a big smile. He has trouble remembering some dates and specific details, he said, but life goes on.

"I don't do much, but I'm all right. I like it here. I go for a walk every day. I watch TV. I'm chaplain for the Knights of Columbus. It's good," he said.

He had to give up some of his favorite hobbies after his stroke. He loved to fly planes, and was a licensed pilot. Now instead of flying down to visit his brother and sister in Texas, he drives.

When he looks back at 50 years in the priesthood, even though some of his memories have faded, he said he is fortunate that he was able to do "some good works" during his time as a priest.

"It's quite enjoyable. I love teaching. I love the Eucharist and the Mass, especially as a priest, the consecration," he said. "And I like getting up early."