Time Capsule 1965-1967A 33-part series on history mined from the first 100 years of Arkansas Catholic and its predecessors. 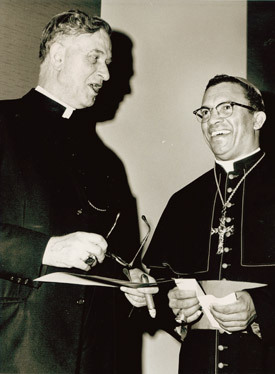 The focus of the world on modernity took center stage in the 1965-1967 issues of The Guardian with closing of the Second Vatican Council and Pope Paul VI's call for peace and morality.

Bishop Albert L. Fletcher and those in the diocese continued work for peace as Pope Paul VI requested of the Church at large, including promoting race relations, ecumenism and interfaith dialogue.

Father John O'Donnell, then-assistant pastor at Our Lady of the Holy Souls Church, was elected head of the Greater Little Rock Conference on Religion and Race, according to the Jan. 8, 1966, issue.

Bishop Fletcher received "a brotherhood citation" at the Arkansas Brotherhood dinner sponsored by the National Conference on Christians and Jews, according to the May 27, 1966, issue.

New Subiaco Abbey continued its mission in Nigeria, despite growing political unrest there.

The tradition of mission work in Mexico, begun as a St. John Seminary summer project, continued for diocesan priest Father John B. Manchino. Bishop Fletcher loaned him to work in the mountain village of El Capulin.

Two seminarians at St. John Home Missions Seminary worked on surveying the Spanish population, who settled in northeast Arkansas. Sadly, this was the period where the seminary faced declining enrollment, and eventual close.

The July 14, 1967, issue reported the close of the theology department, which was the final part of the seminary to close.

The Church, the council and the modern world

The Second Vatican Council came to a close with the fourth and final session in 1965. Bishop Fletcher traveled to Italy aboard the Italine Liner Raffaelo.

Bishop Fletcher continued his letter writing tradition that started when the council opened and continued weekly to the end.

"You already know that the council will close Dec. 8, the great feast of the Immaculate Conception. It will be a day of thanksgiving to the Holy Spirit for guiding the Council during these last four years. It is also a day of petition for light and grace and strength to carry out and fulfill the decrees of the council in a spirit of true conformity to the wishes of the Church," he wrote on Dec. 3, 1965.

Pope Paul VI addressed the United Nations during the fourth session of the Second Vatican Council. His call for peace stressed the importance of brotherhood and not politics. He also warned against emphasis on birth prevention as an answer to poverty.

After the council ended, the bishop began a new series of letters providing commentary on the council and its effects on Arkansas Catholics. His letters explained topics like ecumenism, Church authority on moral matters and the Holy Spirit and were intended to help Catholics study the documents of Vatican II.

"We should not be astonished to know even the Church, the Spouse of Christ, constantly needs renewal and reform ... She is his mystical body, of which he spoke when he said 'I am the head; you are the members.' We members of the mystical body are human beings and as such are not perfect and need constant renewal and reform," Bishop Fletcher wrote.

The Guardian continued to report on changes resulting from the council sessions. The March 26, 1965, issue reported "Abbot, 12 monks concelebrate Mass at Subiaco Abbey." This was the first concelebrated Mass in Arkansas (outside of ordinations and episcopal celebrations).

Communism was a serious threat to the Catholic faithful in countries like Russia, Poland, Vietnam, China and Cuba.

The struggle of Catholics in Vietnam made regular headlines. In Jan. 1, 1966, issue, it said "Catholic village repels strong Viet Cong attack; Arkansan aids in fight." The 6,000 Catholics in Binh Gia had Sunday Mass in peace less than 12 hours after Vietnamese Rangers drove a communist Viet Cong force from the village. "No one showed more glee than the Buddhist province chief, Lt. Col. Dat, who with his American advisors, one an Arkansan, [led] the fight to relieve captured Binh Gia."

While still violent in countries like Vietnam, the Communist takeover of society in other countries was more under wraps.

Priests and religious still disappeared -- either killed, tortured or "re-located" to work camps, but often it was a more discreet war on religion.

Churches were converted into museums and public buildings with exhibits denigrating clergy and religious tradition.

Bishop Fletcher voiced a warning about communism in his speech at the Arkansas Brotherhood dinner. We "cannot compromise with communism. We cannot co-exist with those whose avowed purpose is to bury us," he said in the May 27, 1966, issue.

The Arkansas Knights of Columbus created an education program about communism and the tactics used to spread it. The program was distributed on a set of tapes, and gained worldwide attention as reported on March 17, 1967, "Arkansas anti-communist project goes international."

Mass canon in English to be introduced October 22

Reunion of Anglicans with Rome seen as possible in 5 years

Worthen Bank & Trust Company: Worthen Savings Book, the book with a happy beginning, open your Worthen savings account now ... at any of our 5 locations