Father Bill Elser's childhood dream was to become a priest 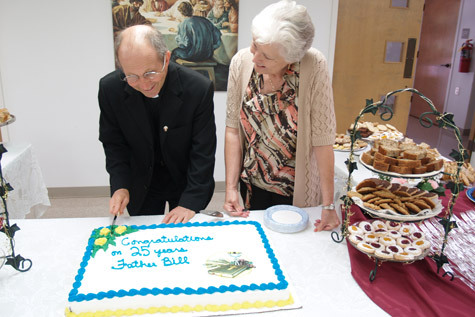 Father Bill Elser, pastor of Sacred Heart of Jesus Church in Hot Springs Village, cuts the cake in May at one of his 25th anniversary parties that were hosted by the parish.

Father Bill Elser, pastor of Sacred Heart of Jesus Church in Hot Springs Village, cuts the cake in May at one of his 25th anniversary parties that were hosted by the parish.

Father William "Bill" Elser heard God's call to the priesthood in elementary school, and looking back at 25 years as a priest, he's glad he listened.

The idea of becoming a priest entered his head early, he said. Since the first grade, he thought being a priest might be for him.

"I gave thought to it in my elementary years due to the influences around me. I was serving Mass since first grade. My family was an influence on me. The religion of my family was important. My uncle, Joseph Biltz, was a priest when I was growing up. My life experiences at St. John School ... all these influences led me to where I am today."

"It's been a wonderful experience of ministering to people in joys and sorrows. It's been a blessing to travel around the state where I got to know people," he said. "Not that is hasn't been a challenge. I had quite a challenge to move as many times as I have. But the blessings are so much greater than the challenges."

"This is the closest I've ever been to my town of origin. It's nice to be close to my mom and family who are there," he said. "The community of Hot Springs Village is wonderful and opened their hearts to me -- these are people who come here to retire from all over the U.S."

He's become the go-to-priest for homemade ice cream. It's a tradition that dates back to his first year as a priest.

"I started making it for youth gatherings and meetings of the altar servers. Then the groups started growing larger and now I'm making it for fundraising, priest retreats, church events. My ice cream-making is known all over."

His specialties include cookies and cream, chocolate brownie, and fruit flavors -- especially strawberry, which is one of his own favorites.

In addition to ice cream, he's also known for his love of music and singing -- a love that he's incorporated into his homilies by adding a song or music at the end.

It's a tradition that grew out of his work with the Life Teen program in Fort Smith.

"In Life Teen, the program often ends with a song that fits the homily. I carried it with me. I love contemporary Christian music. It's Christ-centered and draws me and others into a deeper relationship with the Lord," he said.

The tradition of a priest in the family is continuing. Father Elser's nephew, Stephen, is currently studying for the priesthood.

"I have a very positive and good feeling about his response to the call of God leading him and to have another family member who might be a priest. Three generations of priests would be tremendous if God wills it for him to finish and become a priest," he said.

The will of God is everything, Father Elser said. It's why he is where he is today, because he was willing to follow God.

"I give thanks to God," he said. "I was humbled by the response at my silver jubilee celebration. I'd only been in Hot Springs Village for a year. I felt very affirmed and appreciated. I'm thankful to God for my life as a priest and I look forward to what he has in store for my future."