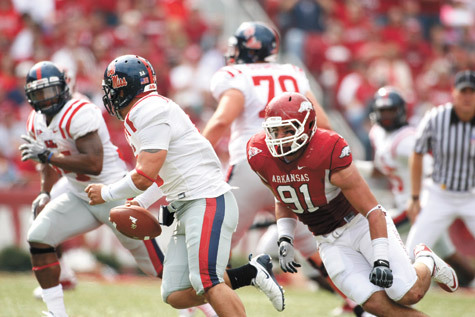 University of Arkansas
Jake Bequette, No. 91 on the Arkansas Razorbacks, goes on the defensive during the Oct. 23, 2010, game against Ole Miss at Donald W. Reynolds Razorback Stadium in Fayetteville. The Razorbacks won 38-24.

University of Arkansas
Jake Bequette, No. 91 on the Arkansas Razorbacks, goes on the defensive during the Oct. 23, 2010, game against Ole Miss at Donald W. Reynolds Razorback Stadium in Fayetteville. The Razorbacks won 38-24.

Jake Bequette stood on the sidelines of War Memorial Stadium in the fall of 2008 and looked around.

It was the same field that barely a year earlier he had prowled during his senior season at Catholic High School, playing both ways for then-head coach Scooter Register. Dotting the crowd, faces of family and friends who had come to see him play bore wide, excited grins. The familiar white walls ringing the field and the bark of the PA system all felt like home.

Only one thing seemed oddly out of place in this tableau. As he looked down, the purple and gold uniform of the CHS Rockets was gone and in its place was the crimson jersey of the Arkansas Razorbacks. The stands, half full during many of his high school games, were packed with the Arkansas faithful from across the state. His dream, nurtured in part in those same stands, was coming true.

"I was so young and inexperienced and pumped up," he recalls. "I was excited to have my first start be in Little Rock."

Bequette's debut performance that day included three tackles and a sack, a peek at what was to come for the 6'5" 270-pound defensive end. Entering his senior season with Arkansas, he has recorded 13.5 sacks, most of any player on the 2011 team and tied for 10th all time in school history. A second-team All-SEC selection last year, he is one of 42 players in the country named to the 2011 Lott IMPACT Trophy Watch List and is also in the discussion lists for top defensive player awards. Last year, he got to experience a BCS Bowl game, where the Hogs lost a heartbreaker to Ohio State in the Allstate Sugar Bowl.

But before all of that, Bequette's journey ran through the halls of Catholic High School, less than two miles from the spot where he made his first collegiate start. Graduating in 2007, his was an education in more ways than one.

"Coming to Catholic High School was the best decision I ever made," he said. "It pushed me academically and prepared me incredibly well for college. As a result, the first couple of years of college classes weren't nearly as difficult as it was for some of my teammates, because that work ethic had been ingrained in me."

Bequette's work ethic in the classroom naturally carried over to the playing field. He remembers setting his mind on a Division I career in ninth grade and under the direction of his father, Jay, spent two hard years sharpening his physique. Already a gifted athlete blessed with good hands, the constant time in the weight room turned him into a tight end who was hard to bring down and a defensive force for whom opposing backfields had to constantly account.

The Rocket program was on the rise during Bequette's four years, after Register had been enlisted to return the team to relevance. As a junior, Bequette led the squad to the state semi-finals and an 11-2 record. Still, there were plenty of games where Bequette found himself a standout on a team long on heart, if outgunned. Bequette said this had particular value in his development.

"Catholic didn't have the caliber of athletes as most of the teams we played," he said. "We developed this 'us against the world' attitude and we would play with a chip on our shoulder. We knew that even if we were competing against players who were better than we were, there was no way they would outwork or out hustle us. That's another one of the lessons that I learned at Catholic that I apply every day."

One of the greatest things about sports -- and the most maddening -- is that nothing is guaranteed. If anyone deserved to be a Razorback, it is Bequette who follows his father, his uncle Chris and his grandfather George on the team. Even with this pedigree, it has been work, faith and dedication that had led him where he is today.

But if it seemed to Bequette that all of these lessons had paid off with an athletic scholarship to Arkansas, he soon found out that the door had merely cracked open. What awaited on the other side would test his confidence, his skills and his unofficial motto 'Prove It Every Day'.

"In July, 2007, I reported to Fayetteville for my first summer session," he said. "I can remember my family, with whom I've always been pretty close, dropping me off and pretty much saying, 'You're on your own. Good luck.' I had to grow up pretty quick."

Surrounded by future NFL talent as Darren McFadden, Peyton Hillis and Felix Jones, Bequette admitted to some self doubt early on, questioning if he really had the stuff to compete with such athletes. His teammates on the defensive unit, particularly linemen, took him under their wing.

"I still have fun playing football. It has to be fun or you won't last very long," he said. "College football is definitely a business with a lot of money and a lot more on the line. But it's still a game to me, the same game I love.

"I'm critical of myself, even when I play well. When you start feeling like you've arrived, that's when you lose it. "

As one who has stepped through the looking glass, Bequette feels the expectations of a state which has been hungry for a winner for too long. He also feels the eyes on him of youngsters who, like he once did, dream of one day playing at the highest level. To them, his advice is simple.

"Dream big, you can do whatever you put your mind to do," he said. "Everyone thinks the most talented person always wins. The thing is, at this level, everyone is talented. The guys who are successful combine that talent with drive and work ethic. Success comes to those who want it most."