Arkansas adapts to new Mass, other changes, prays for peace

Time Capsule 1968-1970A 33-part series on history mined from the first 100 years of Arkansas Catholic and its predecessors. 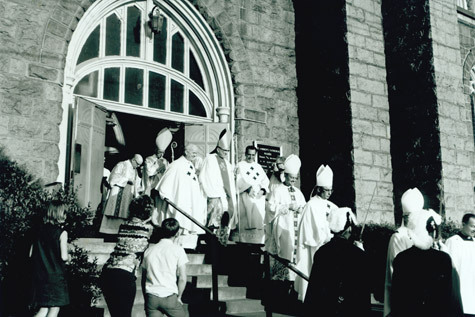 Arkansas Catholic archives
Newly-ordained auxiliary bishop for the Diocese of Little Rock, Lawrence P. Graves, walks down the steps of the Cathedral of St. Andrew in Little Rock April 25, 1969, with others who attended the ordination.

Arkansas Catholic archives
Newly-ordained auxiliary bishop for the Diocese of Little Rock, Lawrence P. Graves, walks down the steps of the Cathedral of St. Andrew in Little Rock April 25, 1969, with others who attended the ordination.

Peace, violence, birth control, abortion and a changing society were news of the day for Arkansas Catholics between 1968 and 1970.

A second native Arkansan rose to the hierarchy in the Church. Msgr. Lawrence P. Graves was ordained auxiliary bishop for the Diocese of Little Rock to assist Bishop Fletcher. Msgr. Graves was with Bishop Fletcher throughout the Second Vatican Council.

Organizations continued to raise much-needed funds to educate priests, despite the close of the home seminary.

Now that the seminary was closed, the diocese looked for uses for the buildings at the St. John campus.

The Guardian offices moved to the "third floor of the west wing of Morris hall," according to the Jan. 5, 1968, issue.

The diocese began a building project reported in the Jan. 19, 1968, issue. "Diocese constructing new headquarters building: Seminary site chosen." The new building would house offices for the bishop, vicar general, chancellor, chancery staff, business office and the department of hospitals and welfare. Since 1947, many of these offices were located in a 3,500-square-foot location at 305 West Second Street in Little Rock.

The Church continued to enact and put the changes from Vatican II into place.

The March 13, 1970, issue of The Guardian discussed upcoming changes to the Mass. "Changes in order of Mass enrich Catholic worship; priests will explain changes in sermons."

The role of laity and the permanent diaconate program became important topics in 1968-1970. Lay members of churches were asked to take a leadership role with the establishment of parish councils. "Diocesan, parish councils being organized in Arkansas," the June 28, 1968, headline stated. Bishop Fletcher asked all parishes to establish councils "so all parishioners will work as a group for the church."

The Oct. 11, 1968, issue stated "Pope Paul approves permanent diaconate for U.S.; Only mature married or single men eligible; Bishops to decide need." Four sites were approved for training of diaconate candidates, according to the Jan. 31, 1969, issue.

Arkansans were called upon to help their neighbors in Mississippi after Hurricane Camille struck. In the Aug. 29, 1969, issue, the paper stated, "Devastated Mississippi pleading for disaster relief; Arkansas Catholics asked to help 200,000 homeless."

During this time, Pope Paul VI consistently called for peace among all men, and to stop violence as a means to an end.

Bishop Fletcher also called for peace in the same issue. "Despite war, seek peace, Arkansans told." "Even at times when we are obliged to defend ourselves and others, we must always be working for peace -- a just peace," Bishop Fletcher said.

Vietnam was a central focus of the call for peace. Headlines ran often about the murder of priests, persecution of Catholics and the plight of refugees.

The Diocese of Little Rock had a hand in Latin American missions with Father Lauro returning to his work in Ecuador and Father Manchino in Mexico.

The Biafran War sealed the fate of Subiaco Abbey's Nigerian mission in 1968, making it too dangerous for the monks to continue their work.

Some priests in countries like Brazil and El Salvador found themselves at odds with the governments over their work for social justice for the poor -- facing imprisonment and kidnappings.

The death of Dr. Martin Luther King Jr. by a sniper's bullet on April 4, 1968, in Memphis drew sadness from both Bishop Fletcher and the pope.

In the April 12, 1968, issue, The Guardian reported, "Violence, eulogies follow death of Martin Luther King." Bishop Fletcher declared a day of mourning for the diocese. "Dr. King was not of our faith, but he exemplified that devoted and heroic love of his own race and of all races, which was but the expression of his love of God," the bishop said. "During Holy Week, as we meditate on the sufferings, death and resurrection of our Lord, let us resolve to work, by word and deed, for peace, harmony and understanding among all men."

Pope Paul VI called it a "cowardly and atrocious killing" and linked Dr. King's death to the "tragic story of the passion of Christ."

The assassination of Robert Kennedy was reported in the June 14, 1968, issue. "Assassination again plunges nation into mourning; Robert Kennedy's death bespeaks poignant lesson" The Guardian ran the most recent family photo, showing Robert Kennedy and his wife Ethel with their nine children. Their youngest son was not in the photograph.

A man tried to attack Pope Paul VI when he visited the Philippines, according to the Dec. 4, 1970, issue. The man, wearing a cassock, was among those greeting the pope at the airport. He tried to stab Pope Paul VI, but was prevented from doing so.

Communists still continued their struggle to wipe God from the fabric of their countries and their citizen's consciousness.

Their focus was especially on restricting religious education and access for children.

In the Jan. 17, 1969, issue, Father Antin Potochniak was sentenced to hard labor in the Ukraine for "conducting 'illegal' divine services, of having preached to a large number of Catholics who were kept from 'useful work,' and of having warned children against atheistic indoctrination given in schools."

The Guardian ran an ongoing series on moral theology, "Know Your Faith," which in the March 20, 1970, issue, addressed the ideas of communism and fascism.

"A Stalin or a Hitler is not fashioned overnight. Nor, for that matter, was Pope John XXIII ... The kingdom of heaven, and the kingdom of hell, are life seeds. It takes time for them to grow into trees and to give forth their fruit," wrote Father John F. Cronin, SS.

Some countries exercised their control over life, allowing unrestricted abortion. Some nurses in England, which passed the Abortion Act in 1967, refused to participate on the basis of conscience.

In Scotland, the June 6, 1969, issue reported that an aborted baby was found alive in a bag eight hours after being sent to the hospital incinerator. Doctors rushed the baby to an incubator. Despite these efforts to save the baby's life, the baby died. The mother was 26 weeks pregnant at the time of the abortion.

In the March 21, 1970, issue, Bishop Fletcher warned Arkansas Catholics not to follow the new state laws "granting civil sanction to the procurement of abortion or sterilization."

Bishop Fletcher addressed abortion again in "Willful abortion violates God's law" from the May 18, 1970, issue. "Comparatively little has been said in our secular news media about the morality of abortion. It is true, civil law is not directly concerned with the morality of individual people. But indirectly it is because the morality and goodness of people will greatly affect the common good of the Country. A country which positively promotes the breaking of God's law in the matter of abortion does not uphold the right to life, liberty and the pursuit of happiness," the bishop said.

In the Dec. 7, 1970, issue, the paper reported "Little Rock Diocese planning Day of Atonement for abortions."

Nigerian priest returns to homeland after study at Subiaco, to found order

Church seen to have part in ecology, pollution area

17 men to study for Arkansas priesthood