Time Capsule 1971-1973A 33-part series on history mined from the first 100 years of Arkansas Catholic and its predecessors. 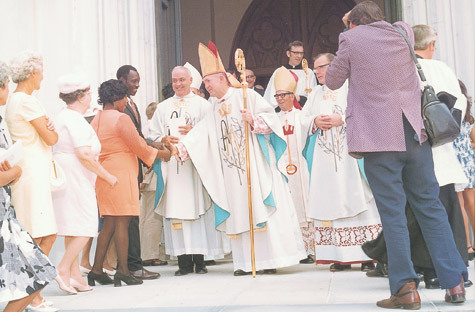 The tragedy of abortion took center stage during 1971-1973, while Arkansas Catholics received a new leader to guide them.

The pope rang in 1971 with his continued calls for peace. "Pope Paul declares Christian faith is key to brotherhood, world peace," the headline for Jan. 1, 1971, read.

Catholics around the world were encouraged to give "alms" to alleviate the poverty and struggles of the Latin American people.

A mainstay in Arkansas' connection to missions in Latin America, Father Joe Lauro, saw fame on a larger scale. His autobiography, "Action Priest: The Story of Father Joe Lauro," was published by William Morrow & Company in 1971. Sadly, he was no longer able to work in Ecuador because of a heart condition. The April 23, 1971, issue reported "Father Lauro mourned; requiem slated here."

The New Subiaco Abbey established a new mission, as reported in the Sept. 10, 1971, issue. "Subiaco monks found Central American House." The monks purchased a 512-acre farm in British Honduras, which is now known as Belize.

Arkansas saw the end of an era in 1972 when Bishop Albert L. Fletcher submitted his retirement to the pope after turning 75, and the start for a new leader for Arkansas Catholics.

In her "letter to the editor" published Aug. 18, 1972, Dorothy Abernethy echoed the feelings of Arkansas Catholics as they bid goodbye to their native son. "Bishop Fletcher retiring? Dear Lord, that hurts. All these years he has been our shepherd, a real shepherd patterned after you. He knows us and we know him. He has showed us your paths, offered us deeper insight into your mysteries, patiently instructed us in what you have revealed of yourself and your plans for us when needed, forgiven us, confirmed us and led us in our daily lives as near you as we would follow ... Dear Lord, I too want to help our new bishop all I can." She stated that she felt Bishop McDonald was already "one of us."

Bishop McDonald was installed on Sept. 7, 1972, and announced a tour of the diocese. He also renamed Auxiliary Bishop Graves as vicar general. Bishop Graves served in this capacity until he was named bishop of Alexandria, La., in 1973.

Abortion continued to be a recurring topic in The Guardian during 1971-1973, as it entered the legal arena in courts around the country. In Ohio, an attorney defended the unconstitutionality of Ohio's abortion statue in Toledo federal court. "The majority opinion recognizes that the unborn child has a right to life superior to the claimed right of a pregnant woman to destroy it," the Jan. 15, 1971, issue reported. "Biologically, when the spermatozoon penetrates and fertilizes the ovum, the result is the creation of a new organism which conforms to the definition of life just given." the court stated in the same article, "Anti-abortion law upheld."

Public opposition of abortion was slowly eroding away. An article in the Oct. 29, 1971, issue stated that the "Federal government reports that more than half the public favors fewer restrictions on abortion."

Organizations tried to combat the pressure on women to have abortions with programs to help women and their unborn babies. "'Birthright' -- abortion alternative," The Guardian reported in the March 26, 1971, issue. The program "providing 'an alternative to abortion' will be started in Milwaukee by May," the article stated.

Natural family planning became an alternative to birth control during this time. "Doctor perfects natural method of birth control," the headline in the July 23, 1971, issue, read. Dr. John Billings reported on his findings for the "new 'ovulation method.'"

The growing acceptance of abortion-on-demand turned tragic when the Supreme Court upheld abortion, as reported in the Jan. 26, 1973, issue.

"The sweeping judgment of the U.S. Supreme Court in the Texas and Georgia abortion cases is a flagrant rejection of the unborn child's right to life ... In effect, the opinion of the court has established that abortion-on-request is the public policy of this nation," said the U.S. bishops' Committee for Pro-Life Affairs.

"I am told that the score on Monday was seven to two. The defenseless unborn babies lost to the 'wise' old men. I am almost numbed into silence, except unborn children can barely whimper, much less cry out," he said.

Subiaco Abbey: Could a monk's thing be your thing?