Time Capsule 1974-1976A 33-part series on history mined from the first 100 years of Arkansas Catholic and its predecessors. 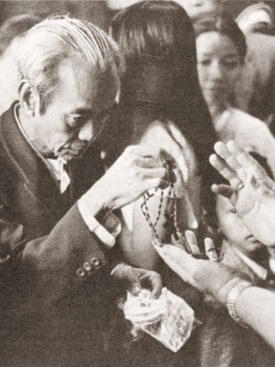 Arkansas Catholic archives
A Vietnamese refugee at Fort Chaffee receives a rosary in this clipping from the May 30, 1975, issue of The Guardian.

Arkansas Catholic archives
A Vietnamese refugee at Fort Chaffee receives a rosary in this clipping from the May 30, 1975, issue of The Guardian.

Arkansas Catholics opened their hearts to Vietnamese refugees at Fort Chaffee, imitating the pope's call for peace through supporting life.

Bishop Andrew J. McDonald called Arkansans to support the poor, the unborn and the refugees during 1974-1976.

In the Dec. 24, 1976, issue of The Guardian, the pope continued his calls for peace in preparation for the annual World Day of Peace. "'If you want peace, defend life,' Pope Paul advises; laity, justice agencies bolstered."

The Catholic population grew in the state, as stated in the May 14, 1976, issue. The article reported 55,991 Catholics in Arkansas, which was 7 percent of the state's total population.

Changes to the rite of penance prompted The Guardian to run a front-page article in the May 7, 1976, issue explaining the new face-to-face confessions versus the "anonymous" confessions -- complete with photos.

Father Jerome Kodell, OSB, from New Subiaco Abbey, began a new "Question Box" feature in the Nov. 12, 1976, issue of The Guardian. One of the first questions answered by Father Kodell was, "Why do Catholics have more books of the Bible than Protestants?"

Bible study was of interest to Arkansas Catholics during 1974-1976. The first mention of a diocesan Scripture study option was in Jan. 10, 1975, with the article, "Registration closing soon for Scripture study course." The Lenten Scripture study was on the Gospel of Mark. Popularity grew, as reported in the May 7, 1976, issue, "Scripture courses draw 400 to 13 parish study groups." The focus of this study was the Acts of the Apostles.

During this time, the Cathedral of St. Andrew saw a restoration and renovation campaign. "The towering gray granite structure, now 92 years old, still is as imposing as ever. During those years it has seen Little Rock and Arkansas grow, and the Catholic faith mature from the frontier days of a century ago," the June 13, 1975, issue said.

The Cathedral's consecration when the work was complete was the first time the new English ritual for dedicating a church was used in the United States, according to the Dec. 5, 1975, issue.

The paper's annual subscription price rose to $6 in August 1975 -- the first increase in 10 years.

The movie, "The Exorcist," drew attention for Catholics. In the Jan. 25, 1974, issue the paper reported that "'The Exorcist' prompts calls, visits to rectories; hundreds frightened." The article stated that at St. Jude Parish in Denver "young people began wearing crosses and rosaries after seeing the film." The movie was deemed "suitable only for some adults."

Refugees from Vietnam came to Fort Chaffee in 1975, and Bishop McDonald asked the people, parishes, hospitals and schools to work to bring "peace, rest and security to these refugees," in the May 9, 1975, issue.

"Television has brought the destruction and terror of war right into our living room. Night after night, we have seen endless agony of the endless columns of whole families in flight. Then, the news came that the endless column of human tragedy would halt for many at Fort Chaffee, outside of Fort Smith," he said.

At least half of the 24,000 refugees were Catholic, according to the May 30, 1975, issue. The bishop asked Arkansas Catholics to donate rosaries, medals and crucifixes to the refugees.

Parishes around the diocese sponsored refugees and helped them settle into the state. Two brothers were re-united after two North Little Rock parishes (St. Mary and St. Patrick) sponsored their families. Ngoc Hoang and his brother Vo Khanh were separated during their flight from Vietnam. Khanh went to Indiantown Gap, Pa., while Hoang came to Fort Chaffee.

On the first anniversary of the Supreme Court's ruling on abortion, Bishop McDonald issued an "affirmation in behalf of life," in the Jan. 18, 1974, issue.

"Abortion is not a 'Catholic' issue; it involves principles which cut across religious lines. The life of every human being is sacred from conception to death. This is so because God has created us, and because each of us shares in the redemption of Christ our Lord. No court, no legislative body, no individual can assign less value to the life of any individual or class of human beings," he said.

The paper reported in the same issue about the National March for Life committee's gathering and march in Washington, D.C., to commemorate the "first anniversary of the U.S. Supreme Court's Jan. 22, 1973, abortion ruling." Thousands of red roses were also sent to congressmen.

Fischer Honey: The Honey with a Southern accent.

Wiederkehr Wine Cellars: Have a glorious meal at Wiederker's Weinkeller Restaurant. The tours are nice too.