Three bishops reflect on impact of Arkansas Catholic in state 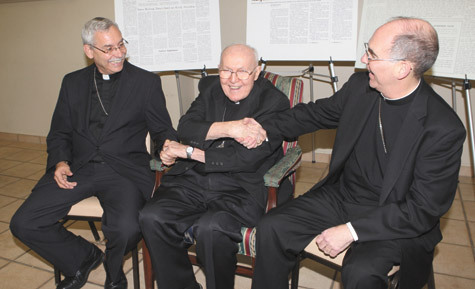 Three bishops of Little Rock gathered at the Cathedral of St. Andrew to celebrate the 100th anniversary of Arkansas Catholic at a Mass and reception Oct. 16.

Bishop Anthony B. Taylor welcomed his predecessors, Bishop Andrew J. McDonald and Archbishop J. Peter Sartain, as well as priests, religious and parishioners from throughout the diocese to commemorate 100 years of reaching out to Catholics in the state through the diocesan newspaper.

"It's like a blood vessel," Msgr. John O'Donnell of Little Rock said of Arkansas Catholic and its impact on the state. "It runs all over the diocese. It keeps everybody together, and alive with information." Prior to the first issue of The Southern Guardian on March 25, 1911, the German-language Arkansas Echo had been the only Catholic newspaper in the state, since 1891.

Bishop John B. Morris, third bishop of the Diocese of Little Rock, founded the diocesan newspaper to communicate more widely with Catholics throughout the diocese. Ever since, the bishops of the diocese have served as publisher. It was first named The Southern Guardian, as the bishop hoped it would be a "champion of truth in his diocese."

It was soon renamed The Guardian, a name which it retained until its 75th anniversary in 1986. The paper is known today as Arkansas Catholic .

In his homily, Bishop Taylor emphasized the important role the newspaper has played in relating the Gospel message in the news of the day.

Bishop McDonald, who was bishop from 1972-2000 and now lives in Palatine, Ill., blew out the candles on a special birthday cake at the reception after Mass. He will turn 88 years old Oct. 24. He also stressed the role of the Gospel in the Catholic press.

"We spread the Gospel by talking about it and by writing about it. The Diocese of Little Rock and the Arkansas Catholic newspaper has always been a great asset, because it is distributed out to the people and it gets into public places where people can pick it up and read it," he said.

Archbishop Sartain traveled from Seattle to celebrate the anniversary. He spoke about culture and the Church in a special presentation at the end of Mass.

"This 100th year of the existence of Arkansas Catholic is a testimony to the fact that the Diocese of Little Rock from its earliest years has taken seriously its role to help Catholics understand their faith and be inspired by it all the more, so that in this particular place, this state which through those 170 years of the existence of this diocese has gone through many cultural transformations. Isn't it wonderful that throughout those many cultural transformations that have taken place in this state alone, Jesus Christ has been faithfully preached, the Christian faith has been faithfully proclaimed and lived. And Jesus Christ through the Church has given us everything that we need to live a life of full discipleship, to keep us on the way that leads to eternal life," he said during his 20-minute presentation.

Working with Arkansas Catholic as publisher from 2000-2006 was always something he enjoyed, Archbishop Sartain said. "I always appreciated the newspaper and think it is an excellent one. I always enjoyed working with it. I think that among diocesan newspaper around the country, this really is one of the best," Archbishop Sartain said. "Just think about the fact that now for more than 100 years it has been published continually. That's an amazing statement about the Church and about the diocese's commitment to journalism and this paper. I'm happy to be here to celebrate this."

The uniqueness of publishing every week is a plus to the current publisher, Bishop Taylor. Many diocesan newspapers have shifted to bi-weekly or even monthly schedules.

"We're able to respond in a current way to things that are just arising," he said. "It also provides me a way every week to put a thought and a different thought in their minds in my columns and the other columns that appear in the paper. We're able to provide a lot more input, news and insight than you might be able to provide on a once-a-month basis."

Following the Mass, a reception sponsored by St. Vincent Health System was held in McDonald Hall. Posters of front pages from The Southern Guardian, The Guardian and Arkansas Catholic at the reception symbolized the theme, "A Century of Faith in News."

"We have a great historical treasure trove with those papers … We have a record of how the Church developed in all those years," said Abbott Jerome Kodell, OSB, of Subiaco Abbey who writes for Arkansas Catholic 's Understanding Our Church series. "I'm delighted to see the emphasis that is being put on the 100th anniversary. It's a strong statement by the diocese and by the bishop that we're going to keep doing that."

In their comments at the Mass, Bishop Taylor and Archbishop Sartain emphasized the critical importance of relaying information and knowledge to the Catholic faithful.

"Our paper is my primary mouthpiece to bring the Good News to our people and to also address situations as they arise in our community, our state and our nation," Bishop Taylor said.

Jan Allmendinger of North Little Rock said at the 100th anniversary reception that the newspaper is an important tool for faith formation. "I read it daily. I love giving it to my kids to pass the faith on to them when they might not be too much in contact with it daily. It give such a wide scope, not only of what's going on in our own Church, the state and internationally. I like hearing different viewpoints and learning from different offers. I get lots of ideas from it," she said.

Arkansas Catholic gives special thanks to the sponsors and donors who made the event possible.