Time Capsule 1980-1982A 33-part series on history mined from the first 100 years of Arkansas Catholic and its predecessors. 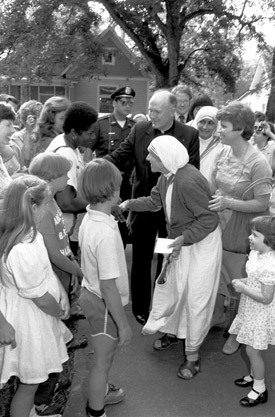 Arkansas Catholic archives
Bishop Andrew J. McDonald and Mother Teresa greet adults and children outside Abba House in Little Rock in June 1982. During the vis it she agreed to send her sisters to staff the home for unwed mothers.

Arkansas Catholic archives
Bishop Andrew J. McDonald and Mother Teresa greet adults and children outside Abba House in Little Rock in June 1982. During the vis it she agreed to send her sisters to staff the home for unwed mothers.

Cuban refugees living at Fort Chaffee, the visit of Mother Teresa, the diocese's first diaconate ordination and the growth of Little Rock Scripture Study were highlights from the early 1980s.

Under the headline, "Diocese helping refugees" in the May 23, 1980, issue, it was announced that the diocese is collecting clothes for the refugees. Father Joseph Biltz, refugee resettlement director, said the diocese was seeking sponsors to help the family resettle in Arkansas.

"The Cuban refugee is an old man, tired grandmother, a distressed father, a frightened mother, a bewildered child," Bishop McDonald wrote in a May 11, 1980, letter published in The Guardian. "But for the grace of God, the Cuban refugee is you and I."

A National Catholic news article described the conditions at Fort Chaffee in the June 20 issue. Father Pedro Nunez of the Archdiocese of New Orleans said he was ministering to 18,500 confused and misjudged Cubans.

He said about 100 people are guilty of rioting and should be jailed, but the rest were decent, hardworking people who were embarrassed by what happened. Many of the refugees were separated from their spouses and children.

In the fall of 1980 the diocese announced it had 22 seminarians. In the fall of 1981 the new vocations director, Father Joseph Correnti, said a vocations shortage is being experienced, but it would be another five to 10 years before it was felt.

While priest ordinations were declining, the number of deacons in Arkansas jumped. On Nov. 7, 1981, the ordination of 21 men was held at the Cathedral of St. Andrew. It was the first class of deacons for the Diocese of Little Rock. The diocese, at the time, had two deacons who were trained in other states. They were Dr. Victor J. Stepka Jr. of Jonesboro and Bill Brock of Little Rock.

After several years as the Arkansas Diocesan Scripture Study program based in Arkansas parishes, what would become known as Little Rock Scripture Study began to get more recognition nationwide and worldwide. A series of articles in August 1980 described the evolution of the ministry. At the time, more than 200 parishes and study groups were meeting.

"In just five years, the Arkansas Diocesan Scripture Study program has become fruitful beyond what any of the originators of the course ever imagined," the first article, titled "A diocesan success story," said.

A large headline saying "He lives! Thanks be to God" with a photograph of Pope John Paul II was prominent on the front page of the May 15, 1981, issue. An assassination attempt on the pope was not successful while he was arriving for his general audience at St. Peter Square. For Christmas that year he gave each bishop a book containing a series of addresses given to pilgrims in October. He recalled his thoughts on his recovery.

The announcement that Mother Teresa of Calcutta was coming to Little Rock in June 1982 was met with much excitement. The Nobel Peace Prize winner came to the state to look at Abba House, a home for unwed mothers, where she was planning to assign her sisters. The couple who started Abba House, Pat and Jim Grabher, were highlighted in the May 7, 1982, issue.

The June 11 issue reported on the visit, complete with four pages of photographs.

"Let's hope what we do will be pleasing to God," Mother Teresa was quoted as saying.

Priests are asking for stricter seminary adherence to rules

Minority enrollments up in diocesan schools