Time Capsule 1983-1985A 33-part series on history mined from the first 100 years of Arkansas Catholic and its predecessors. 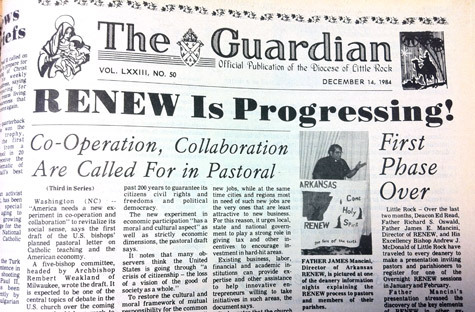 RENEW, a spiritual revitalization program for all parishioners, is covered on the front page of The Guardian's edition of Dec. 14, 1984.

RENEW, a spiritual revitalization program for all parishioners, is covered on the front page of The Guardian's edition of Dec. 14, 1984.

In the May 6, 1983, issue, under the headline "Nuclear arms condemned," the U.S. bishops approved the pastoral called "The Challenge of Peace: God's Promise and Our Response," which was hailed a milestone in the Church.

"Imminent deployment of U.S. cruise and Pershing II nuclear missiles in Europe" made the pastoral a timely topic for the Church to speak about and study. The bishops noted that America used the first atomic bomb on Japan during World War II during a time when the United States was the only one with the weapon.

The bishops encouraged the practice of meatless Fridays, prayers and penance for all Catholics for the promotion of peace. The pastoral was studied in parishes at the urging of Bishop Andrew J. McDonald.

"The issue of war and peace is akin to the issue of life and death," the bishop said in 1984.

At one town meeting promoted by Pax Christi-Arkansas and attended by Bishop McDonald, some laity in attendance criticized the bishop's pastoral.

In the Feb. 10, 1984, issue managing editor Bill O'Donnell wrote in an editorial, "Anyone who believes in the Blessed Virgin Mary must accept the fact that 'war is a punishment from God for sin.'"

Father Joseph Biltz, diocesan director of the Office of Peace and Justice, was a popular speaker at the time. In 1983 he asked Catholics to observe Central America Week, chosen to commemorate the third anniversary of the assassination of Archbishop Oscar Romero.

Other Catholic and ecumenical speakers came to Little Rock to talk about peace and justice issues.

When testifying before the State Judiciary Committee at the State Capitol on Feb. 8, 1983, Father Biltz spoke out in support of a prohibition on capital punishment.

"We concur that violence cannot be stemmed by violence. History proves this and morality calls for it," he told the committee.

He supported the work of James Richard Sauder, who entered missile sites in Arkansas to protest militarism, racism and poverty.

"Father Biltz stood outside the silo grounds reading a Bible while Sauder went inside the fence," a Sept. 16, 1983, article in The Guardian said.

In the June 7, 1985, issue it was announced that Father Biltz was honored by the Urban League of Arkansas. The chairman of the board was given the Outstanding Service Award for his promotion of world peace and economic and social justice.

Father Biltz was arrested on July 23, 1985, in Washington, D.C., with 42 other Urban League members in front of the South African Embassy for his opposition to apartheid.

In May 1983, Mary Doe was buried in Calvary Cemetery. The seven-month-old fetus was found in a drainage ditch. Before her burial she was given the name Mary by North Pulaski County Right to Life, which assumed guardianship of the remains. Christians came forward to ensure the unborn child received a Christian burial and even donated the clothing she was buried in. The diocese donated the plot and North Little Rock Funeral Home donated the casket.

Of the autopsy, state examiner Dr. Fahmy Malak said Mary was "a perfect little bud that was clipped before she could blossom."

(Arkansas Right to Life now bestows the Mary Rose Doe Award annually to honor those who work in the pro-life movement.)

The Council for Black Catholics was organized in the diocese in August 1983 with Father Michael Aureli, pastor of St. Augustine Church in North Little Rock, leading the advisory board. The council, which was discussed for three years, provided a way to dialogue with the bishop about the black community and address the spiritual needs of the community.

"In 1980, Bishop McDonald questioned whether St. Augustine's should be kept open. In the 1950s and 1960s, there were 10 black parishes in the diocese. In the 1970s, it was decided to integrate them with white parishes," Father Aureli said. "Seven of the black parishes closed and many blacks left the Church."

The Guardian was under the leadership of Bill O'Donnell as managing editor and associate communications director for many years. He served on The Guardian staff as managing editor for 31 years. In the March 8, 1985, issue, it was announced that Father Joseph Conyard, SJ, would become the communications director and managing editor, and O'Donnell would retire. In 1981 O'Donnell retired from day-to-day operations of the weekly newspaper but continued to oversee the radio and television ministries. Karl Christ continued in his position as editor.

Renew, a spiritual revitalization program for all parishioners, was launched in the diocese in September 1984. Father James Mancini was named the spiritual director with Father Richard Oswald serving as a consultant. Bishop McDonald brought the program to the diocese with the support of the priests.

"Following the Vatican Council, our Church has undergone a dramatic transformation. Energetic efforts have been made to renew the Church. As part of that effort, I am offering our diocesan family a program or process known as Renew," the bishop wrote.

A Renew Mass was held in October 1985, drawing about 4,000 people to the Statehouse Convention Center in Little Rock.

Surge of petitions may put unborn issue before voters

Subiaco Abbey altar wine, made from Arkansas Delaware Grapes, a delicious white wine made with ecclesiastical approval for use in the Mass