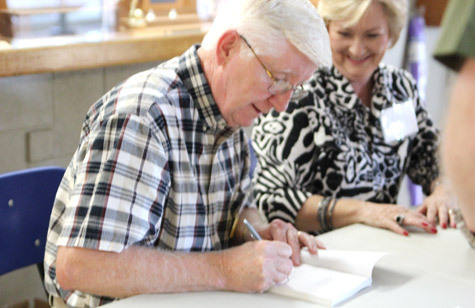 Michael "Mike" Moran retired as an English teacher at Catholic High in 2008, but now returns to the school in his second career as a novelist.

"I taught literature for 40 years at Catholic High School. I always wanted to write my own novel, but my time for that was limited to summertime."

Moran signed copies of his book at the annual Alumni Dinner, which coincided with the release of his book. He also celebrated his 50th reunion as part of Catholic High's Class of 1961.

The novel tells the story of Jesse Crosse, who becomes the unlikely leader of a school basketball team in a small southern town. Crosse doesn't lead by being the star player, Moran said, but by the example of helping others rather than yourself.

It parallels the Gospel of Luke and uses biblical allegory to add depth to the story.

"It seemed to me that one of the hardest things for students to understand is that Jesus was God and man. They think of him like a superman, not like us. Ideally, I hope this story helps them understand this," he said.

He hopes people root for Jesse and his teammates, and the heart of the story, which everyone can find meaning in even if they are unaware of the biblical parallels.

"It's possible that a reader who likes the story may see something in the notion of someone sacrificing himself for others," he said. "A young person without the slightest idea (of biblical allegory) can still be entertained by the story."

He wrote the novel 27 years ago after buying an Apple computer in 1984, which made writing "a lot easier." As a teacher, he was busy throughout the school year, so summer was when he found the time to write.

He sent it out to publishers and collected "rejection letter after rejection letter." For a time, Moran gave up on the manuscript ever finding the right publisher. It sat under his bed in a shoebox.

"I had completely given up hope of having it published," Moran said. "My friend Roy Davis had read it and was a big supporter. He always asked me when it was going to be published. I finally told him, 'It's not going to happen.' And then it did, so imagine my surprise."

The surprise came when an editor at Parkhurst Brothers in Little Rock asked him for the book.

"He asked me where the book was and I told him it was nowhere," he said.

That editor, Roger Armbrust, had known Moran since childhood and read the book 20 years earlier.

While this is his first published novel, Moran is not a first-time author. His nonfiction book, "Proudly We Speak Your Name: Forty-four Years at Catholic High School," Little Rock, was published in 2009 by Butler Center Books.

Now that he's retired, he's writing more. From November to March, he writes every day. Following that schedule, he's written two other novels -- one focusing on literary characters and the other narrated by a teacher.

"One is definitely about high school again, and the other is not," he said. "I spent four decades there, so it rubs off. A lot of people are put off by teenagers. I found them interesting. Being around boys for so many years provided me with lots of material, although most of the similarities are superficial."

Now that his novel is making its way back into the halls of Catholic High School, Moran's presence is influencing a new generation of students. "Jesse Crosse" will be a book of the month for Catholic High School's 10th grade students, which is a program where students must read a book in addition to their regular textbooks.

"I'm really proud that they're doing that. I hope that a high percentage of them read it," said the former basketball player for the Our Lady of the Holy Souls Wabbits and CHS Rockets. "I would like to have a lot of people read this book."