Arkansans work on outreach to minorities in the Church - Arkansas Catholic - November 12, 2011

Arkansans work on outreach to minorities in the Church

Time Capsule 1989-1991A 33-part series on history mined from the first 100 years of Arkansas Catholic and its predecessors. 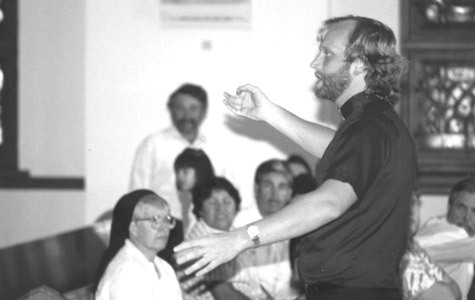 The growing diversity of Arkansas Catholics posed challenges in bringing Catholics together for worship in 1989-1991 and how to prevent discrimination in the state.

The Diocese of Little Rock reached out with ministries to various groups, and offered programs like "Arise" to educate the "unchurched" about the faith.

The Church is all of us

The diversity of Catholics in Arkansas was evident throughout 1989-1991, and something many encouraged the Church to celebrate. The challenge raised in many articles was how to bring Catholics together when language or cultures differed.

It didn't mean problems with race did not exist. In the March 10, 1991, article, "Never give Church an 'all-white' face, Church workers told," leaders were encouraged to reach out to all people and be mindful of how minorities in the Church feel welcome or not welcome.

The year prior saw Arkansas ordain its first black priest, and Father Warren Harvey discussed the need for black Catholics to have a place in the Church and feel welcomed. Some people in his parish neighborhoods, he said, stared at him because they'd never seen a black Catholic priest.

The Hispanic ministry in the diocese grew during this time. An Oct. 13, 1989, article posed the question, "Hispanic & Catholic: Is there room at the inn?" In the article, Father Scott Friend, diocesan Hispanic ministry director, encouraged English-speaking Catholics to attend Spanish Mass to experience it and see how difficult it can be not to understand everything that is said during the liturgy.

The Sept. 2, 1990, issue explored how "Arkansas teens learn from Hispanic children." Teens from Our Lady of the Holy Souls Church traveled to Texas for mission work among Hispanic children. They learned about their culture and what they had in common with them.

The Sept. 29, 1991, the paper heralded, "First annual diocesan Encuentro set Oct. 5." Hispanics from around the state would meet for the daylong event to celebrate their faith, culture and history as Hispanic Catholics in Arkansas.

Although the frequency and intensity of anti-Catholicism in Arkansas dwindled over the years from when The Southern Guardian debuted in March 1911, prejudice against Catholics was still an issue.

The Ku Klux Klan was still at work in Arkansas, trying to put a new face on the old hatred for anyone who was not "white" and "Christian." In the Jan. 19, 1991, issue, Arkansas Catholic took an in-depth look at the Klan in "Ku Klux Klan: New look, old hate." The Ku Klux Klan held a rally in Centerton at this time with the hopes of attracting new members in Arkansas. More news media and onlookers came than people interested in the Klan.

Father Richard Oswald, pastor of St. Stephen in Bentonville and St. Vincent de Paul in Rogers, attended the rally and spoke to the crowd.

The Church in Arkansas again saw hate speech against them in the form of radio shows and printed propaganda distributed by Tony Alamo, pastor of Holy Alamo Christian Church in Dyer during these years. Despite the fact that Alamo was on the run from authorities, he still continued his radio show and trying to pit the Jewish people against Catholics, accuse the Church of persecuting people and state that the pope was akin to the anti-Christ.

The Church saw a rash of vandalism and theft at some of its institutions in 1989. In January, a historic bronze crucifix donated by Bishop John B. Morris was stolen from Calvary Cemetery.

Two chalices were stolen in September 1989 from St. Patrick Church in North Little Rock after thieves broke in through a window in a side door of the church. The two chalices were valued at $10,000 to $12,000.

In the Nov. 13, 1989, article, "St. Patrick chalices recovered from thieves," police said they found the chalices while searching for evidence in another case.

At Catholic High School, a statue of Jesus was spray painted with pornographic graffiti. A U.S. airman stationed at the Little Rock Air Force Base volunteered to clean the statue, according to the May 26, 1989, issue.

The Little Rock Scripture Study continued to gain national popularity, according to an article in the Sept. 15, 1989, issue.

U.S. Catholic published an article about the program in its September issue. At the time, 6,300 parishes had used the program. An earlier article on June 23, 1989, stated that the program was in use by 6,100 groups.