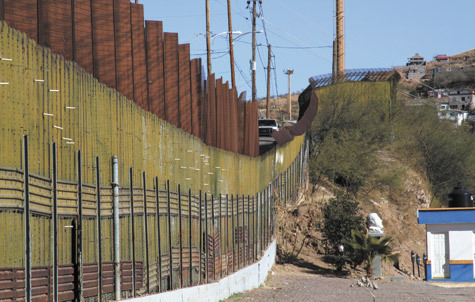 Courtesy EthicsDaily.com
The wall separating the United States from Mexico, as seen from the Mexican side of the border town of Nogales.

Courtesy EthicsDaily.com
The wall separating the United States from Mexico, as seen from the Mexican side of the border town of Nogales.

The new documentary called "Gospel Without Borders" profiles Christians who are living the Gospel message when it comes to treating immigrants as brothers and sisters in Christ.

"One of the energizing things about this is that goodwill Christians are challenging the negative narratives in our culture. I'm so pleased at the prophetic leadership of those involved," said Robert Parham, founder and executive director of EthicsDaily.com, which produced the documentary.

"Gospel Without Borders," released in late August on DVD, shows how several denominations address immigration and injustice to immigrants, including the Diocese of Little Rock under the leadership of Bishop Anthony B. Taylor.

"This is one of the major areas where human rights are violated in our country," Bishop Taylor said. "The Church is very clear on its teaching regarding the human rights of immigrants. In the general population there's a lot of fear and a lot of misinformation about immigration, much of it misinformation that is coming from vitriolic things and demagogues who demonize immigrants and magnify single incidents as if they are somehow representative of the larger reality of immigration."

The DVD documentary explores the issue of immigration from a faith-based perspective and focuses on the issue in Arkansas and four other states: Arizona, North Carolina, Alabama and Iowa. The DVD does not offer solutions or suggestions on immigration reform.

"This is not intended to be a political effort," Bishop Taylor said. "Our role is to preach the truth in season and out of season."

Bishop Taylor, who has worked more than 25 years in Hispanic ministry, was interviewed in the documentary about his leadership on the immigration issue.

The Diocese of Little Rock ordered copies of the documentary for all parishes in the state and is encouraging them to use it as a Lenten study in 2012. The Diocese of San Angelo, Texas, and the Diocese of Gary, Ind., also both ordered large quantities, according to Parham.

All U.S. bishops received a copy of the DVD from the U.S. Conference of Catholic Bishops.

Ethicsdaily.com, a division of the Baptist Center for Ethics in Nashville, Tenn., produced the documentary with a grant from the United Methodist Foundation of Arkansas. Rev. Steve Copley, a Methodist minister and director of Arkansas Justice for Our Neighbors, initiated the idea about the documentary and approached Parham.

Two versions of the documentary are available. The first one is 31 minutes and is meant for public screenings. A longer version is designed for four-session study groups and runs 53 minutes total. A free discussion guide is also available at http://www.gospelwithoutborders.net.

"We have a different understanding of baptism and church policy but have a shared biblical perspective of welcoming neighbors and a shared responsibility to collaborate to advance that perspective," Parham said.

The ecumenical aspect of the project strengthens its impact, Bishop Taylor said.

"I'm also pleased that it's a collaborative effort of Catholics, Baptist and Methodists, and indeed Presbyterians are featured as well," Bishop Taylor said. "Up until now the Catholic Church has been doing much of the heavy lifting on the topic of immigration. These are the three largest Christian denominations. In this, we see that this is not just a Catholic issue; it's about what does Jesus ask of us as Christians regardless of denomination."