Time Capsule 1992-1994A 33-part series on history mined from the first 100 years of Arkansas Catholic and its predecessors. 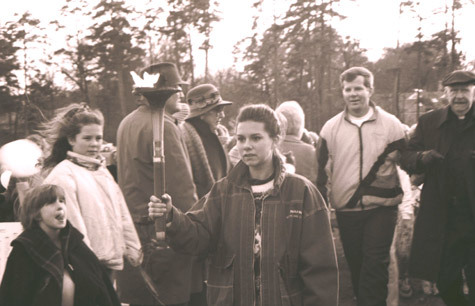 Arkansas Catholic file photo
Kari Kemmerer, representing the Catholic youth of the diocese, holds the sesquicentennial torch at the opening ceremonies Nov. 27, 1993, at St. John Center in Little Rock. Moments later, she passed the torch to Clare Wolf of Prairie View, who lit the sesquicentennial flame. Fifty runners, representing different parishes in the diocese, carried the torch in one-mile increments along its eight-hour, 50-mile journey from Plum Bayou.

Arkansas Catholic file photo
Kari Kemmerer, representing the Catholic youth of the diocese, holds the sesquicentennial torch at the opening ceremonies Nov. 27, 1993, at St. John Center in Little Rock. Moments later, she passed the torch to Clare Wolf of Prairie View, who lit the sesquicentennial flame. Fifty runners, representing different parishes in the diocese, carried the torch in one-mile increments along its eight-hour, 50-mile journey from Plum Bayou.

The Diocese of Little Rock passed a milestone in its history as it turned 150 in 1993, and it looked to stop the growing number of Hispanics leaving the Church.

Catholics in Arkansas continued to work on faith and justice issues, whether it was helping the needy through organizations like Helping Hand or the Westside Free Medical Clinic, developing the ecumenical prison ministry KAIROS in the state or working with migrants to become U.S. citizens.

Girls in Arkansas saw the change of the policy that would not allow them to serve on the altar. The April 23, 1994, issue reported that "Vatican gives approval for using female altar servers; Bishop McDonald says he will permit altar girls following bishops' conference OK." Later that year, the bishop's conference approved the change.

The paper changed its publication date from Sunday to Saturday in 1994. Deb Halter left as editor after four years in 1993 and was replaced by Pete Hoelscher until 1994. In October 1994, Malea Walters Hargett joined Arkansas Catholic as editor.

The growing number of Hispanic immigrants to Arkansas saw the need for offering Masses in Spanish.

Other denominations offered services in Spanish, and many Catholics attended to hear services in their native language. The Diocese of Little Rock continued efforts to bring Hispanics back to practicing their Catholic faith, as reported in 1992 in "Hispanic Catholics in Arkansas: A New Tradition."

"We are never going to walk in the shoes of the immigrant," Father Lawrence Brummer, OFM, said. "There's no ill will, it's simply that we don't understand Hispanic culture, customs or the language."

The differences between practices in Mexico and the United States, where lay people are encouraged to take an active role in ministry, was difficult for Hispanics.

Carolina Espinoza, 12, from a Honduran family, said, "I love coming to church here because everyone is so nice. The people who come to our Masses and who don't speak Spanish love how we sing. I like that."

"The Spanish Mass provides an opportunity to hear the Gospel proclaimed in their native tongue and at the same time to share their music and talents with the parish community," Betsy McNeil wrote in the article.

The Hispanic Ministry office in the diocese continued to build communities around the state. The annual Encuentro continued and grew in popularity. The paper reported on Oct. 8, 1994, that 1,300 Hispanic Catholics attended.

The first Spanish-language articles in Arkansas Catholic ran on April 23, 1994, in a special "Vocations/Vocaciones" section. Diocesan seminarian Pedro Saldivar wrote "Gracias a Dios no regrese a casa" about his vocation. Two other articles discussed the requirements for holy orders and how to discern a call by God.

The diocese announced plans for sesquicentennial celebration in January 1992 and planning began in earnest. In addition to the diocesan committee, parishes were asked to name a chairperson to help plan parish activities. The theme was "Celebrate the Memory, the Moment and the Mission," and it lasted from November 1993 to November 1994.

On Nov. 27, 1993, "Hundreds brave cold to kick off sesquicentennial," the paper reported. A sesquicentennial flame was lit to signify the start of the yearlong celebration.

As part of the "memory" theme, the celebration included publication of a history of the diocese, a television special, a sixth-grade textbook on diocesan history and exhibits of historical and religious items and art. The "moment" theme celebrated parish liturgies, small group programs, Lenten reconciliation programs and sesquicentennial liturgies and prayers. For the "mission" theme, there were youth essay and art programs, parish homecoming events, parish RCIA emphasis, evangelization spotlight and parish open houses

"Catholics unite to honor 150 years of diocese," the paper reported on Nov. 12, 1994. The sesquicentennial Mass drew 5,000 people to the Statehouse Convention Center on Nov. 6, 1994. Twenty-nine bishops participated in the closing Mass. Bishop Andrew J. McDonald buried a time capsule as a way to wrap up the sesquicentennial celebration, the Dec. 10, 1994, issue reported.

The Church began to deal with reaction from the clergy sex abuse scandals. In the Sept. 27, 1992, issue, the diocese outlined an abuse policy in "Diocese of Little Rock issues policy statement on pedophilia issue for all employees." In a column in the same issue, Father David LeSieur looked at how issues affect vocations to the priesthood and the backlash to those considering a vocation. Many issues affect vocations to the priesthood, he said, and abuse diminishes trust in that vocation. He also addressed the outlined policy and the need for it in the diocese. "The steps provided in this policy are a compassionate, tough love way of dealing with the reality of sexual abuse in the Church of the 1990s," he said.

After 108 years, Benedictines give care of St. Edward parish to diocese

Missionary image to come to Arkansas: Our Lady of Guadalupe

Seamstress' originality, talent put her in demand for vestments