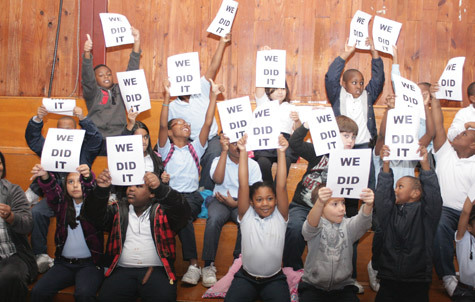 PINE BLUFF -- The new pastor of St. Peter Church in Pine Bluff sent out an SOS to parishioners, parents and benefactors to save the last black Catholic school in the state and the city responded.

On Nov. 9 it was announced that the school needed $175,000 to remain open until May. Father Anil Thomas, SVD, asked the diocesan school and finance offices to assess the school's finances and operations. After a consultation with Bishop Anthony B. Taylor, it was decided that the school would have until Dec. 19 -- about five weeks -- to raise the money.

Father Thomas knew he had to give the teachers and students at least a month's notice if the school would have to close before Christmas so he gave the community seven days, until Nov. 16, to respond to the challenge.

His brainchild was the 7-7-7 Plan. He said the school would need to raise $175,000 in seven days in order to stay open until May. In the next seven months the diocese and pastor would evaluate the school and come up with a seven-year strategic plan.

People began to step forward to reach the first goal. A parent of a high school student, Gary Paris, videotaped and posted videos to YouTube. A caterer hosted a chili supper. Someone challenged her friends on Facebook to give money. A parent of former students, Dr. Erma Washington, began to ask larger donors for cash, pledges and gifts of stock.

On Nov. 17, Father Thomas, superintendent Vernell Bowen and interim principal Sylvana Niciteretse met with the parents, students and benefactors to announce a miraculous event. With cash and pledges, the school raised about $150,000 and was given permission by Bishop Taylor to stay open at least until the end of the school year.

"It's an amazing story to tell people," Father Thomas said.

At the Nov. 17 press conference, the pre-kindergarteners through sixth graders sat on the bleachers of the gym with sheets of paper proudly saying, "We did it."

"It's a Miracle on 15th Street," Bowen said. "It's close to Christmas time. It's a good analogy."

Bowen said St. Peter's former pastor, Father Donald Murrin, SVD, and principal Dr. Carol Ann Beeman knew since at least 2005 that the school was facing financial challenges. At that time, the school had 147 students, but then open enrollment allowed children that lived in the Pine Bluff School District, which was in "academic distress," to transfer to other nearby public school districts.

"Since 2005 the enrollment began to drop and that created the financial problems for the school," Bowen said.

With the closing of Trinity Episcopal School in May, there was hope that those students would enroll at St. Peter, which is 83 percent black. St. Peter School even negotiated to move to larger, better facilities at St. Joseph Church if the school could reach 100 students.

New students did register and enrollment jumped to 92 students. It was determined that the move would not take place this summer but could happen next summer if the enrollment could increase to the century mark. Bowen said slowly over the summer and first months of school, about 28 students withdrew from the school.

John Rice, parish council president and father of a St. Peter alumnus, said, "This school means a lot to the community. I started (attending church) here when I was in the ninth grade. Most everybody that lives in the community here came here first and then they went to public schools … We are just one, big happy family around here."

Rice said he believes the parish and community can pull together to keep the school open beyond May.

"The school has been here since 1889...If you believe you are doing the right thing, it's going to happen," he said.

Washington, whose two children graduated from the school, said she worked tirelessly for a week to raise the necessary money because she was concerned for the children, especially the sixth graders who would graduate in May and move onto junior high school.

"My interest is just in the welfare of these children," she said.

Washington said St. Peter's is known for providing a "good environment" for the students.

"They nurture these children," she said.

"If the church, diocese and community agree that the school should close, if we can't raise another dime, then we will accept that. At least (the closure) will be an orderly transfer rather than disrupting them mid-year."

Father Thomas said his concern until May "are the staff, students and supporters."

Bowen said the next seven months will be mainly focused on student recruitment and a financial review. Tuition rates will also be examined, which range from $2,359 a year for Catholics to $2,621 for non-Catholics. Some families pay as little as $54 a month, though, based on their income, she said.

"The decision (to open in August) will be based on pre-registration. We need 90 to 100 to be committed to open again," Bowen said. "I think that decision can be made by the end of March."